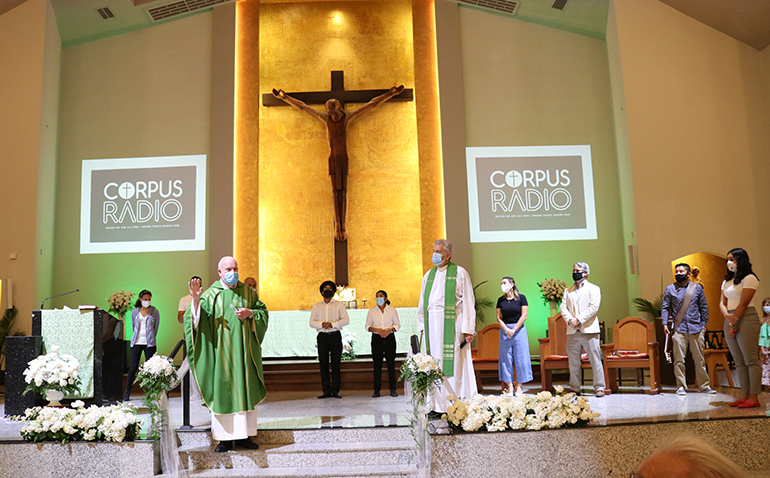 Father Federico Capdepón (left), general producer of Corpus Radio, during the launch of the new radio station presents the young people who helped in this project. Listening with them is Father José Luis Menéndez, pastor of Corpus Christi. 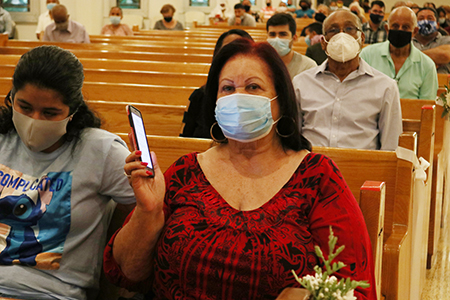 Virginia Salas, a Corpus Christi parishioner for over 30 years, takes out her smartphone to download the Corpus Radio app with the help of her granddaughter, Samanta Reyes, on October 4, during the launching Mass of the new community radio station.

MIAMI | For the first time during a Mass, parishioners of Corpus Christi Church in Miami were asked to “Turn on your cellphones.”

While turning off cellphones is the typical request, “now we are going to ask you to use your phones,” said Father Federico Capdepon, speaking at the conclusion of a Mass Oct. 4, 2020, marking the launch of Corpus Radio, a new online radio station that will play ecumenical Christian music in English and Spanish.

“We must support by listening,” said the priest, who asked that parishioners search for and download the Corpus Radio app on their smartphones, so that they can listen constantly.

The Mass was concelebrated by Father Jose Luis Menendez, pastor of Corpus Christi. In a video message, Archbishop Thomas Wenski congratulated the parish community for “a new station made by young adults and for young adults,” and he wished them much success.

Via a phone call, Rev. Marco Antonio Ramos, a Baptist pastor and member of the Cultural Center of Corpus Christi, invoked a blessing for the new radio station, as well as for those who participate in it. 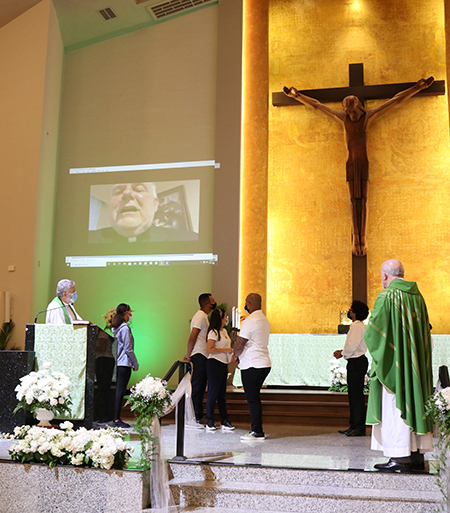 In a video message, Archbishop Thomas Wenski congratulated Corpus Christi community for the new station Corpus Radio, and he wished them much success. 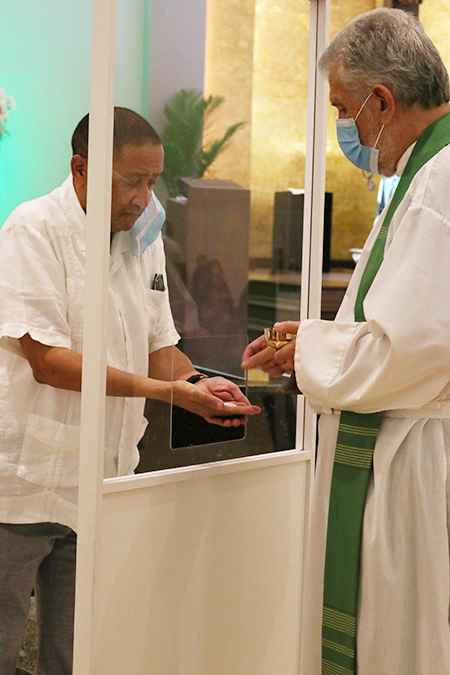 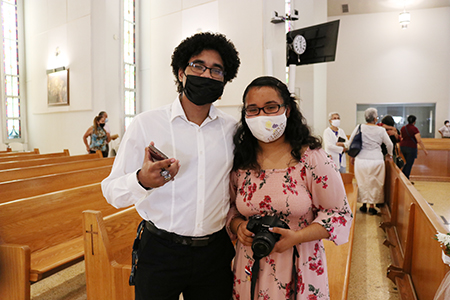 Due to technical difficulties, the Mass was not livestreamed, as is done daily at Corpus Christi. Father Capdepon, director of communications at the parish, asked for prayers “so that the Lord helps our community radio, Corpus Radio, and all the young adults involved, despite difficulties, to proclaim the Gospel through the radio waves.”

Corpus Radio has been Father Capdepon's dream for many years, and he serves as its general producer. During the coronavirus pandemic, his dream became a reality with the support of members of the parish young adult groups, who lent their voices to create the welcome greeting for the new radio station.

Many young Catholics like Christian music and listen to Protestant radio stations like K-Love, and “we have nothing to put forth our message,” said Father Menendez.

Corpus Radio is for people not searching for talk shows, but for those looking to simply listen to music. The bilingual station will transmit ecumenical Christian music online 24 hours a day. It premiered in mid-September through its free application, which can be downloaded from the App Store and Google Play. The station is already being heard in Iran, Japan, Australia and in different cities in the United States, said Father Capdepon.

With the theme, “We are all one,” Corpus Radio seeks to evangelize the young, especially those who do not go to church, by giving them the alternative of Christian music. The station will not compete with South Florida's other Catholic radio stations, Relevant Radio 1080 AM (in English) and Radio Paz 830 AM (in Spanish), said Father Capdepon.

The priest, who established Radio Paz in 1990, explained that this is a different kind of radio station. He reviewed the programs of various stations in Latin America, Brazil and the U.S. “and they all talk and talk, about devotion, about the rosary, and none of them are aimed at the young.”

Catholic musicians also struggle for publicity and support, he noted. Moreover, since all the young people are on the internet, “conventional stations have less and less of an audience,” Father Capdepon said.

During the pandemic, parish staff were searching for an outlet through which to broadcast “and we saw that online radio was what we were searching for,” said Javier Bru, executive producer of Corpus Radio, and pastoral director and musical coordinator for Corpus Christi Church.

Corpus Radio currently does not broadcast live, although that's the next goal. Also in the works is including messages from the Gospel and Pope Francis. The station is ecumenical because it is aimed at both a Catholic and a Protestant audience.

“We are including evangelical singers whose lyrics are in communion with our doctrine,” said Bru, adding that he wants the station to be “a resource that is within reach of people, of good quality, and thank God, it is finally on air.”

On its website, corpusradio.com, listeners can find information about the artists being played, as well as the programming, which includes segments classifying the type of music, so that there is a certain variety within the same Christian genre. Segments of choral music and Gregorian music alternate with contemporary music as well as music from the 1960s and '70s, in a segment called “Retro.”

New music will promote the new things that are being done, while a segment for Hits will cater to people who enjoy listening to timeless music, Bru pointed out.

Corpus Radio’s website also enables listeners to purchase the music they hear directly from iTunes or the Apple Store. The station has purchased licenses from Broadcast Music, Inc. (BMI), a broadcast performing rights organization in the U.S.; ASCAP (American Society of Composers, Authors and Publishers), an American non-profit organization that protects the rights of musical authorship; and SoundExchange, a non-profit organization designed by the U.S. Congress to collect and distribute digital performance royalties for sound recordings.

All the artists whose songs are transmitted by Corpus Radio should receive royalties, Bru said.

The station is non-profit. “We are looking for necessary financial resources and hope that in the near future donors present themselves to help support and sustain our project,” said Bru.
“If there is anything we can do at this moment to produce in the vineyard that the Lord has placed in our hands, is to spread the word of Corpus Radio among our families. Communicate with family and friends and let them know that there is now a Catholic, bilingual and ecumenical radio station,” said Father Menendez. 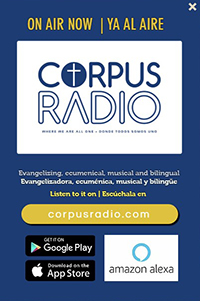 The Corpus Radio app can be downloaded for free from the Apple App Store or Google Play; or you can visit corpusradio.com; or link to it via Corpus Christi Church's website www.corpuschristimiami.org/.

Other News from Corpus Christi Church