MIAMI | One teen shared his passion for science, engineering and coding with youths in the inner city. Another launched an online clothing store and donates 20% of the profits to charity. Others took extraordinary steps to help foster children, provide warm clothing to people in need, and bring home-cooked meals to the homeless.

Those are just a few of the outstanding achievements of the archdiocesan class of 2020, who brought home nine Silver Knight awards and 14 honorable mentions in the annual competition sponsored by theMiami Herald and El Nuevo Herald. The Silver Knights recognize both academic excellence and outstanding service to the community.

Carrollton School of the Sacred Heart in Coconut Grove had the most winners this year: three, followed by St. Thomas Aquinas in Fort Lauderdale and Christopher Columbus High School in Miami with two each. Archbishop McCarthy High School in Southwest Ranches and Belen Jesuit in Miami had one winner each.

Aquinas also took home six honorable mentions while Belen Jesuit had three, Columbus and Our Lady of Lourdes Academy had two, and Archbishop McCarthy had one.

The awards are open to graduating seniors in all public and private high schools in Miami-Dade and Broward counties. Winners in each of the 15 academic categories receive a $2,000 scholarship from the John S. and James L. Knight Foundation, a Silver Knight statue, an AAdvantage 25,000-mile travel certificate and the Silver Knight medallion presented by American Airlines employees. Honorable mentions receive $200 and a plaque.

Following are the 2020 winners and honorable mentions from Catholic schools. The descriptions are taken from the Miami Herald's Silver Knight site: 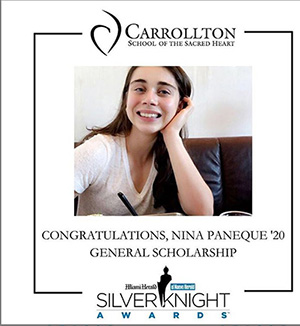 Nina Paneque, General Scholarship: Driven by her personal experience with discrimination in basketball, Nina’s "Because She Can" blog about gender inequalities in sports grew into a digital magazine with 6,000 followers on social media. It inspired Johnson & Johnson to create a "Because She Can" retail campaign for the FIFA Women’s World Cup. In addition to running the magazine and overseeing eight interns, Nina mentors younger athletes and tutors her peers in calculus, chemistry, physics, literature and history. She is a National Merit Semifinalist, AP Scholar and National Hispanic Scholar. 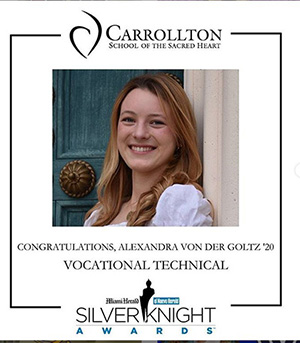 Alexandra Von Der Goltz, Vocational Technical: Alexandra struggled with debilitating anxiety until she heard Rachel Platten’s “Fight Song” and began to regain control of her life. In her sophomore year, she created the BeCalm app with help from a student programmer at EduTec in Guatemala. The app aims to help others like her combat stress and anxiety, and is available on the Google Play Store. Alexandra received a National Honorable Mention Award for Aspirations in Computing from the National Center for Women & Information Technology. She has been president of her school’s chapter of the National Technical Honor Society and is a Science National Honor Society Member. She also earned an AP Scholar with Honor Award. 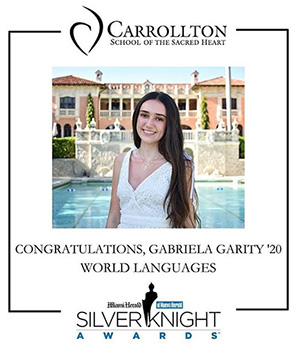 Gabriela Garity, World Languages: Since she was in fourth grade, Gabriela has led the Casserole Project, which provides home-cooked meals for the homeless. She chooses six hearty, protein-rich recipes each year for students, staff and families to prepare and freeze, which are then sent to the Missionaries of Charity soup kitchen in downtown Miami. Gabriela oversees all aspects of the project, from planning logistics to recruiting student leaders and promoting the project. Gabriela also is proficient in Mandarin Chinese. She was a member of her school’s first AP Chinese Language class and president of its Chinese National Honor Society. She was awarded a U.S. Department of State Scholarship that allowed her to spend two months living with a host family in China and attending classes. 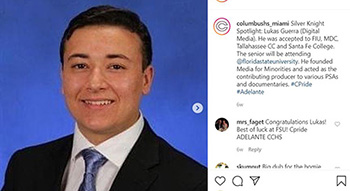 Lukas Guerra, Digital & Interactive Media: Lukas created Media for Minorities to share his passion for digital media with elementary and middle school students at Somerset Oaks Academy in Homestead. He drove there every Wednesday during the school year to teach students about media, graphics and editing their projects. In the summer, he helped build a studio at the school. He also used his digital media skills to assist several nonprofits, including SebastianStrong (pediatric cancer), Castaways Against Cancer, and Running with Danny (cystic fibrosis). He helped raise $50,000 for the American Cancer Society by filming a documentary for Castaways Against Cancer focused on a Relay for Life crew that kayaked from Miami to Key West. He has won numerous student Emmys and is a member of Quill and Scroll Honor Society. 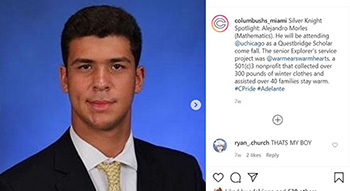 Alejandro Morles, Mathematics: Alejandro's nonprofit, Warm Ears, Warm Hearts, has benefited more than 400 families by collecting more than 400 pounds of winter clothing for families in the Northeast, primarily in the Bronx. To help fund the organization, he launched the Smash Coldness video game tournament, which has raised more than $3,000. In January, he flew to New York and personally delivered the clothing. Alejandro also used his first paycheck from his Banesco USA internship to fill a box with supplies for his family in Venezuela. He also has tutored his classmates in everything from Honors Algebra to AP Calculus. 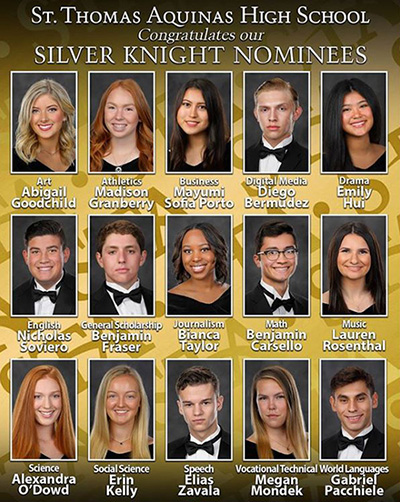 Mayumi Sofia Porto, Business: Inspired by Asian street fashion, Mayumi launched an online clothing store called Harajuku Rose. She donates 20% of all its profits to Charity: Water, a nonprofit that provides clean water to people in developing communities. Mayumi also volunteers at Covenant Living of Florida retirement home, helping seniors better understand their electronic devices. She was named a National Merit Commended Scholar and is a tutor with the National English Honor Society, the National Honor Society and the National Spanish Honor Society.

Alexandra O’Dowd, Science: School faculty selected Alexandra to lead, design and develop The Greenhouse Project, a hydroponic tower garden named Fresh STArt Garden. The self-irrigating, sustainable garden educates middle and high school students about climate change and eco-farming. The garden's vegetables and herbs are donated to local food pantries and parishes. Alexandra was president of the STEM Club and co-founder and president of RaiderKind, a nonprofit to spread kindness, prevent bullying and empower young girls. She is an AP Scholar and the recipient of the University of Rochester, Xerox Innovate and Information Technology Scholarship Award.

Kayla Torres, Journalism: Kalya launched the Our House project to serve residents of His House, a home for children in the foster care system. She recruited 90 volunteers and raised funds to purchase shoes, uniforms, and medical supplies for more than 100 children. The project continues to grow, attracting hundreds of volunteers and supporters through Instagram and Facebook. She also utilizes social media to share her reporting, short stories, videos and essays. Kayla is also a National Commended Scholar, National Hispanic Merit Scholar and AP Scholar with Distinction. 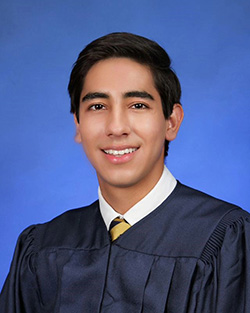 Esteban Rincon, Science: After volunteering with Breakthrough Miami to teach science, engineering and coding to underserved youths, he created the Young Tinkers Robotics Foundation, a non-profit aimed at providing a cost-free robotics program to benefit the inner-city community. He began working with youths from San Juan Bosco Parish in Little Havana, traveling there every Tuesday with a group of his peers from Belen. They taught middle school students how to build their own VEX IQ robots, instilling in them a passion for robotics. 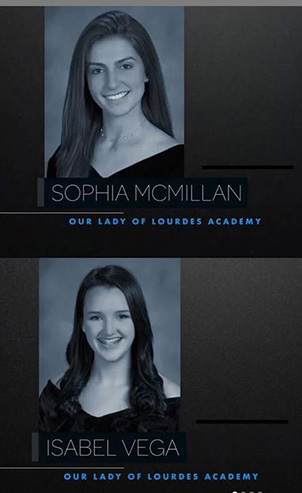