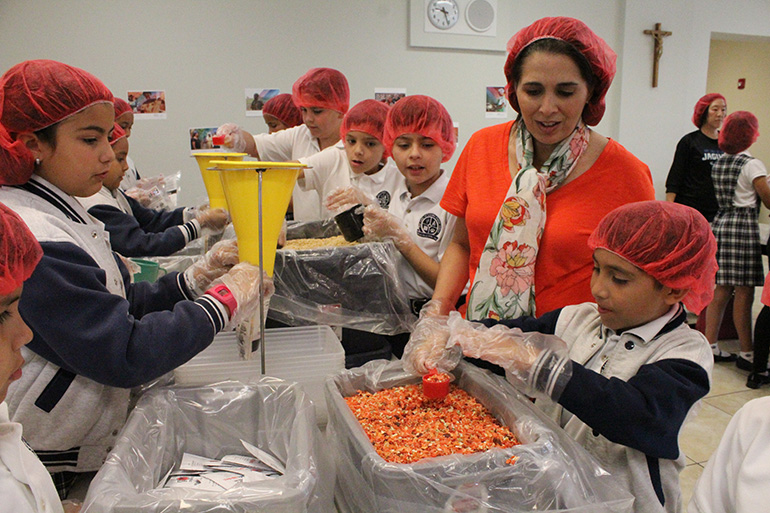 In this file photo from 2017, Our Lady of Lourdes School's third-grade teacher, Ana-Yvette De Atienza, supervises her students as they prepare meal bags for the hungry in Burkina Faso, Africa. The Supreme Court ruled July 8, 2020 that "that educating young people in their faith, inculcating its teachings, and training them to live their faith are responsibilities that lie at the very core of the mission of a private religious school."

WASHINGTON, D.C. | The Supreme Court on Wednesday delivered a long-awaited religious liberty decision on the right of religious schools to hire and fire teachers. The court found in favor of two Catholic schools in California, ruling that a “ministerial exception” to government interference applies to teachers in religious schools.

The ruling came July 8, 2020 in the consolidated cases of Our Lady of Guadalupe School v. Morrissey-Berru and St. James Catholic School v. Biel. The justices ruled in a 7-2 decision that teachers at Catholic grade schools qualified for the “ministers exception” established by the court in the 2012 Hosana Tabor case.

“The religious education and formation of students is the very reason for the existence of most private religious schools, and therefore the selection and supervision of the teachers upon whom the schools rely to do this work lie at the core of their mission,” wrote Justice Samuel Alito for the majority. “Judicial review of the way in which religious schools discharge those responsibilities would undermine the independence of religious institutions in a way that the First Amendment does not tolerate.”

Archbishop Thomas G. Wenski of Miami, chairman of the U.S. Conference of Catholic Bishops’ Committee for Religious Liberty, and Bishop Michael C. Barber, S.J. of Oakland, chairman of the Committee on Catholic Education, issued a statement praising the decision:

“Education is a central aspect of the Church’s mission. Indeed, teaching is one of the Spiritual Works of Mercy. Our Lady of Guadalupe and St. James schools continue the Catholic tradition of offering Christian education. As institutions carrying out a ministry of the Church, Catholic schools have a right, recognized by the Constitution, to select people who will perform ministry. The government has no authority to second-guess those ministerial decisions. We welcome the Supreme Court’s decision, which rightly acknowledged this limit on state authority. This decision means that the Church can continue to serve her neighbors with integrity.”

The two California Catholic schools did not renew the contracts of the teachers in 2014 and 2015. In separate cases combined by the Supreme Court, the teachers alleged that their dismissals were based on disability and age, not poor performance. The schools claimed they were exempt from employment discrimination laws under the ministerial exception, the legal doctrine under which government cannot interfere in the employment decisions of churches and religious institutions regarding the hiring and firing of ministers.

In both cases, the teachers’ suits were dismissed by federal courts, and then reinstated by the U.S. 9th Circuit Court of Appeal. 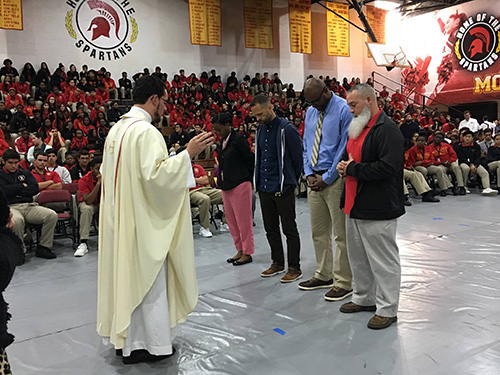 Father Bryan Garcia blesses Pace teachers who went to Haiti on a mission trip in 2017. In praising the Supreme Court's July 8, 2020 decision, Archbishop Thomas Wenski noted that "education is a central aspect of the Church’s mission. Indeed, teaching is one of the Spiritual Works of Mercy."

When the Supreme Court heard oral arguments in the combined case in May, lawyers for the schools argued that “for hours on end over the course of a week,” teachers in Catholic schools were the “primary agents” by which the faith was taught to students. Argument — and questions from the bench — focused on how broadly the ministerial exception could be applied to the employees of religious schools.

The decision comes just weeks after the court’s ruling in Bostock v. Clayton County, that employers cannot fire employees because of their sexual orientation or “gender identity.” Justice Neil Gorsuch, who authored the majority opinion in that case, acknowledged that religious freedom cases related to the decision would probably come before the court in the future.

The decision about who qualifies as a minister could directly impact future cases in which teachers might be dismissed for failing to adhere to Church teachings on same-sex marriage or transgender issues, both of which have been subjects of controversy in recent months.

“Requiring the use of the title [minister] would constitute impermissible discrimination,” the court ruled. Referencing the previous decision in Hosana Tabor, Altio wrote that there must be “a recognition that educating young people in their faith, inculcating its teachings, and training them to live their faith are responsibilities that lie at the very core of the mission of a private religious school.”

The verdict also explicitly referenced the policy of the Archdiocese of Los Angeles, home to both of the schools, designating all teachers in Catholic schools as being effectively ministers.

“Like all teachers in the Archdiocese of Los Angeles, Morrissey-Berru was 'considered a catechist,' i.e., 'a teacher of religion,'” Alito noted in his decision for the majority.

“There is abundant record evidence that [both teachers] performed vital religious duties. Educating and forming students in the Catholic faith lay at the core of the mission of the schools where they taught, and their employment agreements and faculty handbooks specified in no uncertain terms that they were expected to help the schools carry out this mission and that their work would be evaluated to ensure that they were fulfilling that responsibility.”

The court concluded that “when a school with a religious mission entrusts a teacher with the responsibility of educating and forming students in the faith, judicial intervention into disputes between the school and the teacher threatens the school’s independence in a way that the First Amendment does not allow.”

Rudolph I Ramirez - 07/16/2020 01:58 PM
This might be true but it does not detract from the issue of justice in the original. It now becomes incumbent on Church authorities to honor the spirit of the legislation involved. What was the real reason why these individuals were terminated? Unless stringently documented, "unable to maintain class control" seems to be somewhat vague and fabricated. Since the time of Pope Leo XIII the Church has become a leader in Social Justice, esp., when it relates to workers. The Church's historical and vehement opposition to the unionization of its teachers just adds fuel to the fire. What will the Church do to maintain the principles of justice in relation to its teachers and workers?