What No. 2267 said before, and now after change by Pope Francis 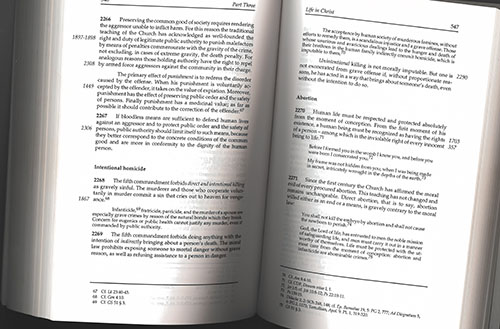 Click on the image to read the Catechism of the Catholic Church.

2266: The State's effort to contain the spread of behaviors injurious to human rights and the fundamental rules of civil coexistence corresponds to the requirement of watching over the common good. Legitimate public authority has the right and duty to inflict penalties commensurate with the gravity of the crime. The primary scope of the penalty is to redress the disorder caused by the offense. When his punishment is voluntarily accepted by the offender, it takes on the value of expiation. Moreover, punishment, in addition to preserving public order and the safety of persons, has a medicinal scope: as far as possible it should contribute to the correction of the offender.

2267: The traditional teaching of the Church does not exclude, presupposing full ascertainment of the identity and responsibility of the offender, recourse to the death penalty, when this is the only practicable way to defend the lives of human beings effectively against the aggressor. [Lk 23:40-43]

“If, instead, bloodless means are sufficient to defend against the aggressor and to protect the safety of persons, public authority should limit itself to such means, because they better correspond to the concrete conditions of the common good and are more in conformity to the dignity of the human person.

“Today, in fact, given the means at the State's disposal to effectively repress crime by rendering inoffensive the one who has committed it, without depriving him definitively of the possibility of redeeming himself, cases of absolute necessity for suppression of the offender ‘today ... are very rare, if not practically non-existent.’ [John Paul II, Evangelium vitae 56.]

2267: Recourse to the death penalty on the part of legitimate authority, following a fair trial, was long considered an appropriate response to the gravity of certain crimes and an acceptable, albeit extreme, means of safeguarding the common good. Today, however, there is an increasing awareness that the dignity of the person is not lost even after the commission of very serious crimes. In addition, a new understanding has emerged of the significance of penal sanctions imposed by the state. Lastly, more effective systems of detention have been developed, which ensure the due protection of citizens but, at the same time, do not definitively deprive the guilty of the possibility of redemption. Consequently, the Church teaches, in the light of the Gospel, that “the death penalty is inadmissible because it is an attack on the inviolability and dignity of the person,” and she works with determination for its abolition worldwide. [Pope Francis, Oct. 11, 2017]