Cardinal-elect Wilton Gregory: A pastor shaped by a 'wonderful legacy of faith'

Washington archbishop speaks about his appointment, 'legacy of faith' as African American Catholic

VATICAN CITY | October 25 will forever be etched in Archbishop Wilton D. Gregory’s personal history as well as that of 13 other clerics, prelates and other local churches.

It would have been just past 7 a.m. in Washington, D.C., when the Holy Father announced his intention to elevate that city’s archbishop to the College of Cardinals. 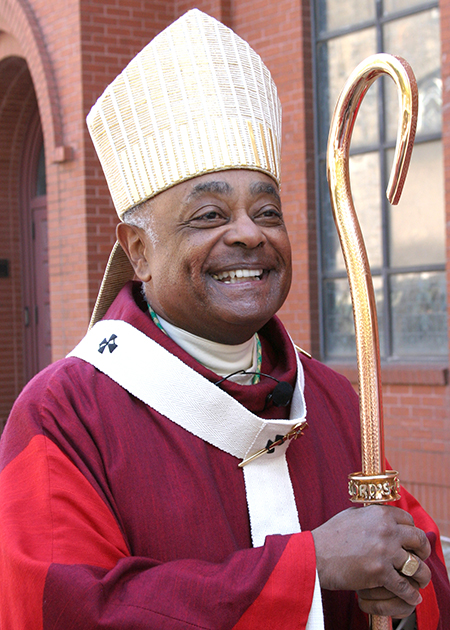 File photo of Cardinal-elect Wilton D. Gregory in January 2013, when he was archbishop of Atlanta.

Cardinal-designate Gregory spoke with Vatican News about how he heard the news, what his first thoughts were, how he hopes to represent his fellow African-Americans and how the various places in which he has lived and work have shaped his pastoral ministry.

Archbishop Gregory told Vatican News it was one of his close friends who first broke the news to him that Pope Francis had chosen him to be a cardinal.

“About five minutes after the Angelus concluded, I got a telephone call from Cardinal Kevin Farrell who said, ‘I want to be the first to congratulate you on being named to the College of Cardinals’.”

The archbishop said he had no prior knowledge of Pope Francis’s decision. On hearing the news, the first thought that went through his head was: “I thought that God is good and how grateful I was to the Holy Father for this appointment and how I look forward to working closely with him in his ministry to the universal Church.”

With this appointment, Archbishop Gregory will become the first cardinal in the Church in the United States of African-American descent. He hopes his appointment is received, not only by his fellow African Americans but also by all U.S. Catholics, as a “sign of the love and the respect that the Church universal has for us in our culture, our language, our traditions.”

Specifically, regarding his fellow African Americans, his hope is that they see in his appointment a call for them to “be more deeply invested in their local parishes and their local dioceses.”

The Cardinal-elect described the “wonderful legacy of faith” to which he belongs as one that “stretches back from the earliest days of our arrival on these shores – in chains.” But also a legacy containing “some bright and wonderful examples of faith and holiness in the lives of a number of people whose causes for canonization are already at the Holy See.” 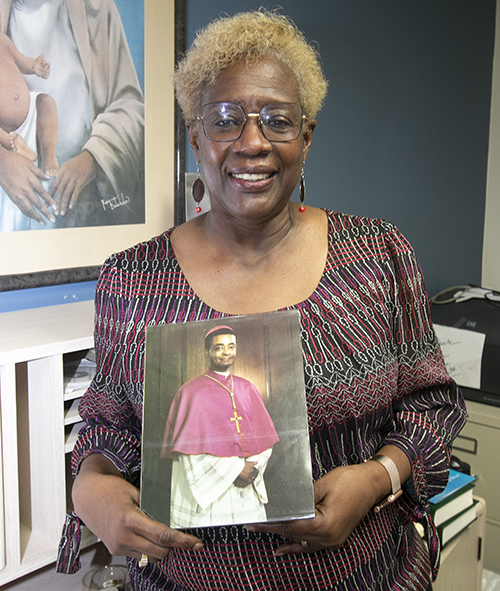 Katrenia Reeves-Jackman, director of the archdiocesan Office of Black Catholic Ministry, holds up a picture of a very young bishop, now Cardinal-elect Wilton Gregory of Washington, D.C., the first African-American to be elevated to that rank.

Archbishop Gregory mentioned three of these people in particular: Pierre Toussaint, a slave who, after gaining his freedom in New York, performed numerous works of charity for those less fortunate than he; Father Augustus Tolton, a former slave and convert to Catholicism who, after his ordination, served in the Chicago area; and Sister Thea Bowman, whom the cardinal-elect described as a “wonderful, wonderful, woman religious, whose presence and enthusiasm and whose vibrancy still resonate throughout the Church in the United States.”

“We've produced holy, generous, zealous Catholics from our cultural and racial tradition. And I hope they get more attention in many respects than I do because their contribution to the life of the church is already a proven treasure,” the cardinal-elect said.

FORMED BY PEOPLE AND PLACES

Cardinal-elect Gregory’s pastoral ministry has been honed in varied places: the sprawling Midwest metropolis of Chicago; the rural diocese of Belleville, Illinois; the southern Archdiocese of Atlanta, home to one of the fastest-growing centers of Catholicism in the U.S.; and the nation’s capital.

He has “been blessed,” he said, “in each of those environments.”

He is proud of his Chicago heritage that blessed him with his “entrance into the Church.” Serving in southern Illinois for almost 11 years introduced him “into the wonderful world and faith traditions of rural Catholics, small-town Catholic communities.”

In Atlanta, he “learned much about the heritage of the Church in the South and the great contributions that the people in Atlanta and the environs made to the civil rights movement, the wonderful heritage of Dr. King and so many of his colleagues whose lives enriched the Church in Atlanta.”

Since his appointment to the nation’s capital in April 2019, Archbishop Gregory is “finding out more about the wonderful legacy of faith of the people who have made Washington and its territory rich with their fidelity, their love, their generosity, and their endurance.”

Cardinal-elect Gregory stated that in all these places in which has had the “privilege” of serving, he has “found wonderful, loving people.”

Yet he has also been exposed and shaped by what he calls “the unseemly issues of racism and exclusion and inequity that are also a part of the legacy that I found in those variety of pastoral services.”

“I’m looking forward to finding out how the Holy Father intends to celebrate this consistory” — set for Nov. 28, 2020 — given the current health crisis, the Cardinal-delegate said in concluding his interview. “And I will do whatever the Holy Father asks not only at this moment but throughout my ministry as one of his cardinals.