Do we pray just to win the lottery? 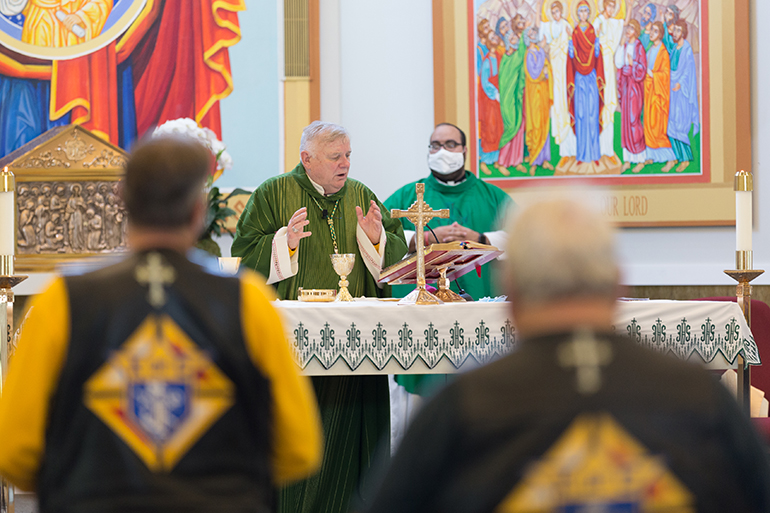 Accompanied by Father Matthew Gomez, archdiocesan vocations director, Archbishop Thomas Wenski celebrates Mass at the start of the first Knights of Columbus-affiliated Ride for Vocations conducted in conjunction with the Knights on Bikes organization of Florida and held May 27, 2021 starting at St. Katharine Drexel in Weston. After celebrating the Mass, Archbishop Wenski led the ride all the way to the Knights of Columbus Kissimmee Council Hall No. 6624 south of Orlando. All donations benefited Florida seminarians.

Archbishop Thomas Wenski preached this homily at a Mass celebrated May 27, 2021 at St. Katharine Drexel Church in Weston which kicked off the first Charity Ride for Vocations sponsored by the Florida State Council of the Knights of Columbus. The riders, including Archbishop Wenski, made their way to Kissimmee after the Mass.

In this Gospel reading, we hear Jesus ask someone once again: “What do you want me to do for you?” In today’s Gospel, he poses the question to the blind son of Timaeus.

How would we respond to Jesus asking us: What do you want me to do for you? The Apostles James and John asked Jesus if he would do them a favor (actually it was their mother who asked him). The favor they wanted, of course, was to sit on his right and left when he entered the Kingdom. James and John wanted positions of status and power. Bartimaeus, who by calling Jesus “Son of David” recognized him as the Messiah, simply asked for sight – and receiving it followed Jesus on the Way. (And if we were to continue reading from this Gospel, the next chapter brings Jesus into Jerusalem and to the cross.)

“What do you want me to do for you?” Jesus’ question is an important one for each one of us to consider – lest we follow Jesus for the wrong reasons. Remember how after he had fed the crowds with the miraculous multiplication of the loaves and fishes, Jesus rebukes them not for following him but for following him for the wrong reasons. (cf. John 16) They wanted free bread. 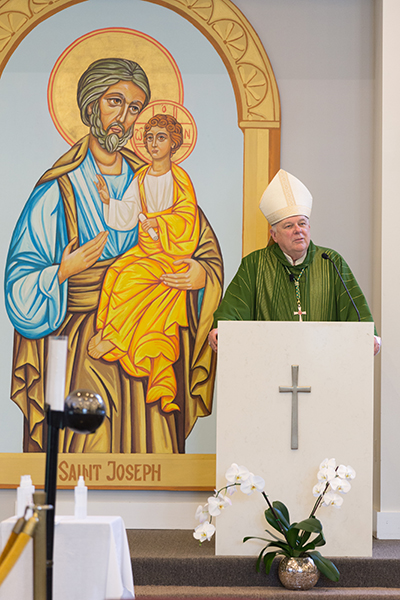 Archbishop Thomas Wenski celebrates Mass at the start of the first Knights of Columbus-affiliated Ride for Vocations conducted in conjunction with the Knights on Bikes organization of Florida and held May 27, 2021 starting at St. Katharine Drexel in Weston. After celebrating the Mass, Archbishop Wenski led the ride all the way to the Knights of Columbus Kissimmee Council Hall No. 6624 south of Orlando. All donations benefited Florida seminarians.

And people, then as now, often do seek Christ for the wrong reasons. I recall how one time one of my parishioners asked me to pray over her. She wanted the Holy Spirit to cure her headache. I told her that if she wanted to get rid of the headache, better to take a Tylenol. Jesus doesn’t give you the Holy Spirit to take away headaches – but to make us his witnesses. And sometimes being his witness – especially in a world that seems to be increasingly hostile to Gospel values - will give you a headache, if not worse.

After the multiplication of the loaves and fishes, the crowds followed for free food.

For James and John– at least in the beginning - it was for status and power.

What are we looking for from Jesus?

Do we pray like Bartimaeus for sight – to see with faith what God is calling us to? Or do we pray just to win the lottery?

Lots of people do look for such tangible results for their having put their faith in Jesus. We see this often in the attitude of the adherents of the “prosperity gospel” preached by some of the T.V. evangelists.

The trappings of wealth are seen as a sign of God’s blessings. This “health, wealth and prosperity” gospel is in fact a heresy – a false teaching – which distorts the true Gospel message. But it has been a perennial temptation. St. Augustine – in the fourth century – remarked: “How many seek Jesus for no other purpose than that he may do good for them in this present life. Scarcely ever is Jesus’ sought for Jesus’ sake.”

If we buy into this “health, wealth and prosperity” gospel, then inevitably we will undergo a crisis of faith when the cross intrudes into our lives. And the cross will intrude – whether through sickness, business failure or family crisis.

Bartimaeus remains for us a model of true discipleship. First, because he is not put off by those who tell him to shut up. He kept the door open to faith, even when others wanted to close it for him.

For those people who say they don’t go to Mass anymore because some usher or some priest was rude to them, I offer Bartimaeus for their patron saint.

For those of you “too shy” to go to confession, Bartimaeus, someone not too proud to ask for mercy, could be your patron saint.

For those tempted to expect God to shower you with favors, just because you follow him, Bartimaeus, someone happy to possess nothing more than the light of faith that saves, could be your patron saint.

Yes, he received sight – but in doing so, he did not go back to business as usual: begging along the roadside. The Gospel tells us that he threw aside his cloak – which had to be his dearest possession, a blind man’s security blanket – and followed Jesus along the Way. (Before they were called Christians, Jesus’ disciples were simply called “followers of the Way”.)

And so, for those of us who find it difficult to give up “the security blanket” of old habits of sin, we have in Bartimaeus a man who accepts the risks of discipleship with his eyes wide opened.

God’s work was accomplished by Jesus – through the Way of his Passion, death and Resurrection. It is a work that calls forth from us – as it did from Bartimaeus – a great act of faith. This act of faith is expressed through our own giving of ourselves, our self-offering to the one sent from God, Jesus the Christ, not for the good he might do for us in this present life but, as St. Augustine said, for his own sake.

“What do you want me to do for you?” Jesus asks. Do we ask for wealth, riches or power? The once blind Bartimaeus is a sure guide. The witness of our lives will certainly grow in credibility if, like Bartimaeus, we ask the Lord for the light of faith, the forgiveness of our sins, and the strength of his Holy Spirit so that we may always walk with him as his friend.