Archbishop Wenski's homily on the feast of the Immaculate Conception 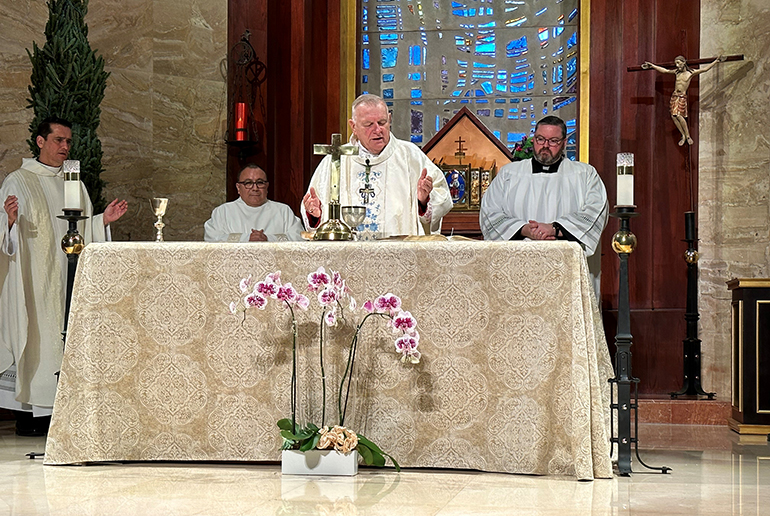 Archbishop Thomas Wenski preached this homily while celebrating Mass for Pastoral Center employees at St. Martha Church on the feast of the Immaculate Conception, Dec. 8, 2022.

We are preparing for Christmas – the birth of Jesus – who comes into a lost world to save it and bring it back to God. During Advent we are encouraged to make straight the way of the Lord by doing penance, for it is only when we acknowledge our sinfulness and our need of God that Christmas can make sense. Otherwise, we would forget that Jesus is the reason for the season.

With today’s feast of Mary’s Immaculate Conception, we affirm our belief that by a unique privilege, because she was to be the Mother of God become man, Mary was preserved from all trace of sin from the very first moment of her life. Just as we prepare for Christmas, God himself was preparing for Christmas Day in a very wonderful and awesome way.

The first reading tells us the story of Adam. When God created Adam, he made his preparations beforehand. He made a paradise ready for him to live in. Adam lost paradise for himself and his descendants because of his sin, but God didn’t give up on us. He promised a redeemer, a new Adam who would come to restore mankind to friendship with himself once again. 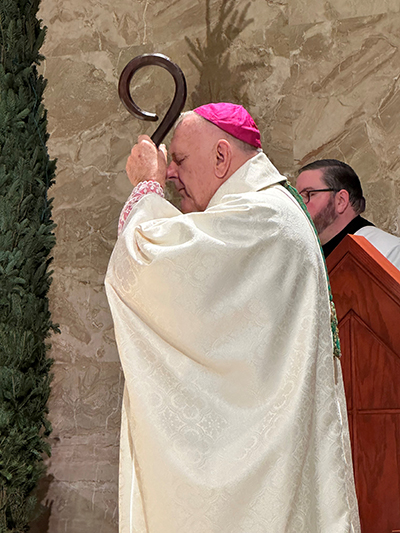 Archbishop Thomas Wenski listens to the Gospel while celebrating Mass on the feast of the Immaculate Conception at St. Martha Church, located next door to the archdiocesan Pastoral Center, Dec. 8, 2022.

Well, just as he prepared a paradise for the first Adam to live in, when the time came for the new Adam to come into the world, God once again had to make some preparations. He fashioned a paradise for the second Adam to dwell in, and that paradise was the womb of our Blessed Mother who was immune from any taint of sin which was the legacy of Adam’s curse. And if the first Eve was made from a rib taken from the side of the first Adam, the second Adam, Jesus, took flesh in the virginal womb of Mary. Mary is for us like a new Eve.

If the world without God seems like a barren wasteland caught in the throes of a seemingly never-ending winter, in Mary – she who is full of grace – we see God’s springtime breaking through the frozen ground of mankind’s indifference and hardness of heart. The sinless virgin is like a bud that burst forth into life on a branch, the Israel of the Old Testament, that appeared to be dead. That bud will eventually produce a flower, her Child born in Bethlehem.

The Immaculate Conception of Mary is God’s answer to our hopelessness because she will become in time the Mother of the true Hope of the World. She says yes to God – and in that yes, hope is reborn, and the promise given by God to Adam and his children is fulfilled.

Her “yes” helps reverse the “no” of Adam and Eve – in this way, Mary shares in a special way in the work of Jesus who comes into the world so that we, too, like Mary might learn to say “yes” to God. For that is the way of true freedom, our true happiness. Adam and Eve thought that freedom and happiness could be found without God, and they said no to him.

Today’s feast of the Immaculate Conception reminds us that long before we began our Christmas preparations, God began his – by choosing Mary from the first moment of her conception for a singular mission in the history of our salvation. To bring us Jesus was the only reason for anything Mary did. Jesus should be the reason for everything that we do as Christians: he is our Peace, our Joy, our hope, our Savior, our Life.