Get ready: Another synod is coming

This one is not just for South Florida; it's a worldwide 'listening' at the behest of Pope Francis

Vatican logo for the 16th Synod of Bishops, the "Synod on Synodality," to be held in Rome in October 2023.

MIAMI | Another synod will be taking place in the Archdiocese of Miami this year, but this time, Pope Francis will be doing the “listening.”

For those who might not remember, the archdiocese held its Second General Synod from April 2012 to October 2013, with Archbishop Thomas Wenski spending the summer of 2012 visiting more than a dozen parishes, sitting and listening to parishioners’ answers to several questions. The goal was to determine what the archdiocese was doing right, what the archdiocese could do better, and what its priorities should be for the next few years. That synod concluded in October 2013 with a closing Mass and publication of a strategic pastoral plan for the Archdiocese of Miami.

Something similar will happen at the Synod of Bishops set to take place in October 2023 in Rome — except it will be the world’s bishops meeting, after listening to the world’s Catholics, and making recommendations to Pope Francis for the universal Church.

The official title of this synod is “Towards a synodal Church: communion, participation and mission.” The shorthand title is “Synod on synodality.” It will be the 16th worldwide Synod of Bishops — a practice that began after the Second Vatican Council — and Pope Francis announced it this past May. He will open the process Oct. 9 in Rome.

“The pope has asked every single diocese in the world to participate in this process,” said Rosemarie Banich, who served as director of the archdiocese’s second synod. 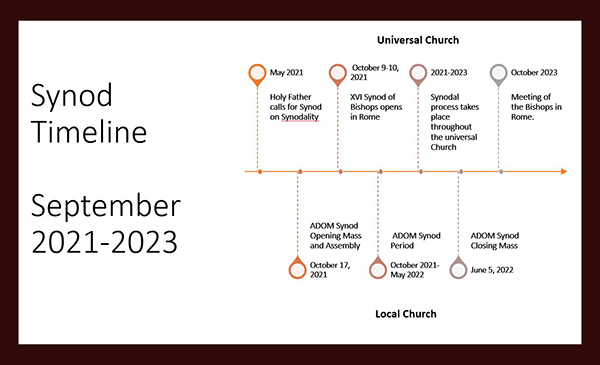 She compared that process to a fast-moving train with herself as the conductor. This synod will be more like a bullet train, and once again, she will be the conductor.

“We’re not starting all over and doing everything we did for the Second General Synod,” said Banich. “The process is much more compact in time and in scope.”

Briefly: the archdiocese will open this special synod with a Mass at St. Mary Cathedral Oct. 17; consultation sessions will take place in October and November in every single parish and at the deanery, or regional, level; the findings will be compiled and reviewed by working teams between January and March 2022; and the archdiocesan report will be submitted to the U.S. bishops’ conference in April 2022.

The next steps will be at the level of the U.S. bishops and continental bishops’ conferences, ultimately leading to the meeting of bishops with the pope in Rome in October 2023.

In the meantime, the archdiocese will take the results of those consultations and create a local implementation plan, with a synod closing Mass and celebration scheduled for June 5, 2022.

Although it’s a “special” — not a “general” — synod, “it’s going to be very good for the archdiocese regardless,” said Banich. “Part of it will be responding to whatever the pope is asking, part of it will be pertaining to our own planning and discernment.”

The Vatican just this month sent out the “vademecum,” or “official handbook for listening and discernment in local churches,” along with the Synod Preparatory Document, which includes a questionnaire of sorts.

According to the preparatory document, “The fundamental question that guides this consultation of the People of God ... is the following: A synodal Church, in announcing the Gospel, ‘journeys together:’ How is this ‘journeying together’ happening today in your particular Church? What steps does the Spirit invite us to take in order to grow in our ‘journeying together’?” 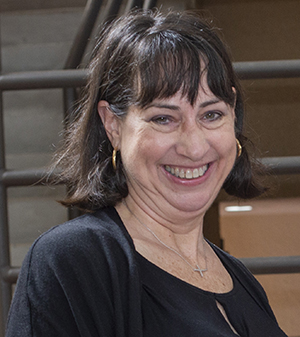 For this special synod, the archdiocese will name 14 people to a Synod Preparatory Commission — an official body in canon law whose role is to provide advice, discernment and consultation to the archbishop throughout the process. The commission members, being named right now, will hold their first meeting Sept. 23.

In addition, every parish will select three individuals as synod members. They must be in place by the opening Mass Oct. 17. Their role will be to facilitate the consultations at the parish level — some of which might take place online — and report those results at the deanery level.

“We want to make it as simple as possible,” said Banich, adding that “this is an opportunity for parishes to shake off the COVID haze, even though we’re still in it.”

The working teams — working from January through March — will consist of experts in a particular area of ministry or Church governance. A synod assembly will take place sometime in April to reveal the results of the consultations and make action recommendations to the archbishop.

“We’re going to take advantage of this process” to evaluate the current health of the initiatives put in place after the archdiocesan synod and chart new pastoral priorities “to meet the current reality of the Church,” said Banich. “What do we do moving forward?”

Banich is a familiar face to many in the archdiocese. In fact, the synods represent the “bookends” of her service here. She started out as director of the archdiocesan synod in 2012 and became director of Youth and Young Adult Ministry in 2014, responsible for implementing one of the priorities identified by the synod: more outreach to youths and young adults. A few years ago, she took on additional responsibilities as director of Parish Life.

A family move to the Atlanta area ended her employment here at the end of August, but at the request of the archbishop, she will be traveling back and forth as needed to “conduct” this “special” synod “train.”

“It will be over before we know it,” she predicted.

Deacon John Lorenzo - 09/22/2021 09:03 PM
Pope Francis desires to hear from his flock throughout the entire Catholic Church through a worldly Synod. What a marvelous undertaking in this age of communication so necessary to save the souls of the many lost sheep who need guidance in attaining their inheritance to heaven. This worldly Synod will allow the wisdom of Jesus Christ to flow through His children to help and assist His Vicar of Christ on Earth in doing the Will of God. Since the world is so different in so many ways, being Catholic will make it possible to focus our thoughts and desires to suggest what we feel is necessary to save all souls.

Valli Leone - 09/22/2021 05:26 PM
It sounds great! You can count on my prayers from then until the meeting time early next year. Holy Spirit, renew your church; set our hearts, lives and families on fire with love for you and for each other. May every person in every continent, every country and every culture draw close to the living Word of God in Eucharist in these days ahead and benefit from the effects of this upcoming Synod. Our prayers can go where we cannot go! Jesus never fails. ðâ¤ï¸ð