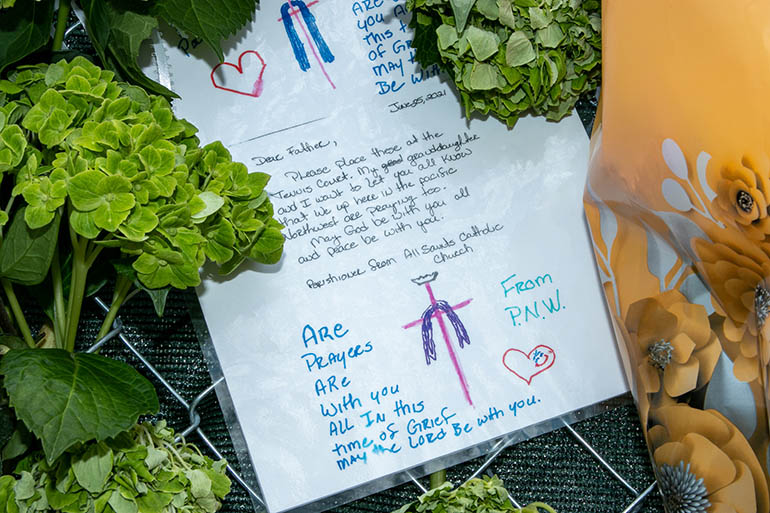 Visible at the Surfside Wall of Hope Memorial: a card written by the granddaughter of a Catholic parishioner from the state of Washington assuring "we are praying" for all those suffering due to the partial collapse of Champlain Towers South. The card was mailed to St. Joseph Parish with the specific instruction that it be placed on the memorial wall. “The only thing that they will ever remember is that you are present for them,” said Martha Lohrstorfer, a Red Cross volunteer who is among a number of chaplains —priests, rabbis, deacons and lay people — trying to console those affected by the tragedy.

SURFSIDE | People serving as chaplains at the site of the collapsed Champlain Towers South condominium said their role is not to say anything, but simply to listen.

“The only thing that they will ever remember is that you are present for them,” said Martha Lohrstorfer, a Red Cross volunteer who is among a number of chaplains —priests, rabbis, deacons and lay people — trying to console those affected by the tragedy.

“That you stood by their side as they grieved. There are no words necessary, and in fact if you use words, (sometimes) you’re not helping at all,” said Lohrstorfer, a Catholic from Michigan and the wife of a deacon.

She was stationed at the memorial wall created along the fence of a tennis court near where the building collapsed on June 24, 2021. For days, she watched as people stopped by the memorial to bring flowers, pray, cry, or to just stop and witness. She ministers by listening and accepting people wherever they are, emotionally and spiritually.

“That is all we are called to do. It’s so simple, but it’s so hard because silence is uncomfortable, and being present with a grieving person is uncomfortable, so, in order to really nurture the human spirit, which is the goal of disaster spiritual care of the Red Cross, you just have to be present,” she said.

Before she heads out each morning, she said, she prays the Prayer of Abandonment written by Blessed Charles de Foucauld. It opens: “Father, I abandon myself into your hands; do with me what you will. Whatever you may do, I thank you: I am ready for all, I accept all.”

Lohrstorfer said she thinks it has led many people in distress to come to her for comfort, sometimes inexplicably.

Further along Collins Avenue, a few buildings north of the collapse site, Deacon Thomas Hanlon, a chaplain for the Miami-Dade Police department, was stationed at the Surfside Community Center, the original reunification center for survivors and families searching for those missing. (The families have been relocated to a nearby hotel but the center remains a place where police, rescue workers, and volunteers go to eat, gather and rest.) 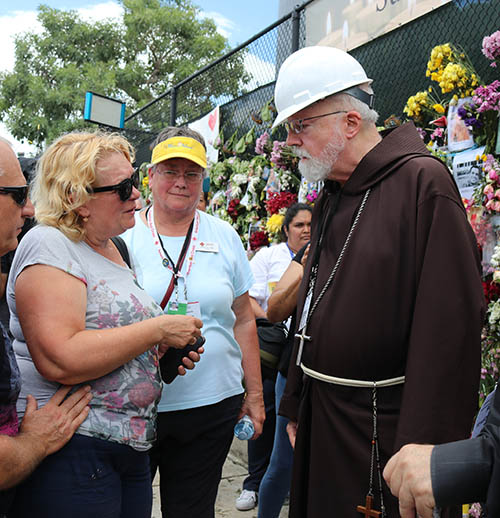 Martha Lohrstorfer, a Red Cross volunteer and Catholic from Michigan, center, stands and listens as a woman looking for her missing daughter speaks with Boston Cardinal Sean O'Malley during his July 2, 2021 visit to the site of the Champlain Towers South collapse.

Deacon Hanlon said “our role is to minister to everyone. All the families that are here,” including families from St. Joseph, the Catholic church closest to the disaster site.

Unlike Lohrstorfer, his job is to assist officials asking hard questions.

“What we do is ask them about who is missing and get them talking about the person, and bring some comfort to them, and pray,” Deacon Hanlon said.

Recently, he was consoling a Jewish man whose wife was still missing from the condo collapse when a rabbi and a priest arrived.

“I grabbed him and said, ‘We’re covered,’” Deacon Hanlon recalled.

A parishioner at St. Louis in Pinecrest, and a deacon for 26 years, he said he has worked in disaster situations before, going as far back as Eastern Flight 401 that crashed in the Everglades in December 1972, where he counseled families and survivors.

“Sudden death is the toughest to bear. The magnitude is significant,” he said. “You just have to be sensitive to persons’ needs.”

This article first appeared in the July 2021 print edition of the Florida Catholic.