BOYNTON BEACH | St. Vincent de Paul Regional Seminary is mourning the loss of a beloved brother and faculty member, Father Nicholas Cachia, who died July 28, 2021. He had served on the seminary's faculty since 2016 and directed the Pre-Theology Program from 2017–2021. 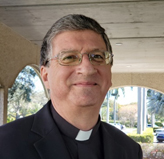 Father Nicholas Cachia had taught at St. Vincent de Paul Regional Seminary in Boynton Beach since 2016. A native of Malta, he died July 28, 2021.

“He dedicated his priesthood to forming good and holy shepherds according to the heart of Christ, and has gone home to share in the wedding feast of heaven,” said Father Alfredo I. Hernández, rector and president of the seminary.

Father Cachia was born Nov. 22, 1961, in Malta and ordained a priest of the Archdiocese of Malta on July 8, 1988. In addition to his current role at the seminary, he served on the board of the Seminary Formation Council and as chaplain of the Serra Club of Southern Palm Beach County.

Since 2004, Father Cachia had served as a spiritual director and lecturer for the Institute for Priestly Formation at Creighton University in Omaha, Nebraska. He was also a member of the IPF Priests of St. Joseph. At different periods between 1996 and 2015, he served as spiritual director and lecturer at the University of Malta and the Archbishop’s Seminary in Tal-Virtu, Rabat.

He received his licentiate in Sacred Theology at Tal-Virtu, Malta in 1988, and his master's and doctorate in Sacred Theology from the Pontifical Gregorian University in Rome in 1990 and 1995, respectively. He is the author of many publications, the most recent being "33 Days with St. Joseph," based on Pope Francis’ apostolic letter Patris Corde, on the occasion of the Year of St. Joseph.

Updated July 30, 2021: The funeral Mass for Father Cachia will be celebrated Tuesday, Aug. 3, at 4 p.m., preceded by visitation prior from 2 to 4 p.m., in the chapel of St. Vincent de Paul Regional Seminary, 10701 S. Military Trail, Boynton Beach. Those unable to attend in person can follow the livestream here.

Kathy Werthman - 08/04/2021 04:15 PM
Sad news. Father Cachia was a good friend to our disabled participants at Schott Communities. He will be missed. Praying for his family, colleagues, students, and friends.