The roof has been likened to an open book or an overturned ship's hull.

To the right of the altar is a statue of the patron saint, along with the swan that befriended him.

St. Joseph holds the Christ Child and his budding staff at the left of the altar.

Mary, as Our Lady of Fatima, prayerfully stands at the right of the chancel.

Intense blues, flecked with yellow and red, fill the northern gable of the church.

Chapel in the rear honors Mary as Our Lady of Charity, patroness of Cuba.

An ornate cross holds a first-class relic of St. Hugh, a fragment of bone.

Statuette in the sacristy likewise depicts St. Hugh and his devoted swan. The Christ Child figure in the chalice is based on a vision St. Hugh had.

St. Martin de Porres pauses in his housekeeping duties to contemplate a cross. The statuette is in the sacristy.

Shrine to Our Lady of Lourdes stands in a garden at the rectory. The inscription says "I am the Immaculate Conception," Mary's words to Bernadette.

Hovering overhead in the rectory chapel is a dove, symbol of the Holy Spirit, set against a sunburst.

A window of Christ the King is the centerpiece at a chapel in the rectory.

The miracle at Cana, where Jesus turned water into wine, is portrayed in another chapel window.

The baptism of Jesus is the theme of the third chapel window.

This painting of Our Lady of the Rosary, in the back of the chapel, is 400 years old.

St. Hugh and his devoted swan stand prominently in the church office.

Statuette of Our Lady of the Immaculate Conception greets visitors to the church office.

Even the stairwell at the rectory has an imposing piece of art: Jesus being given his cross to carry to Calvary.

COCONUT GROVE | Bishops are accustomed to loyal humans, but not devoted huge swans. One of them may have recognized its own fierce, loyal nature in St. Hugh, whose feast day is Nov. 17.

Historians remember St. Hugh as a formidable bishop in medieval England. Inside church walls, he restored piety and discipline. Outside, he fought for Church freedom from meddling kings. 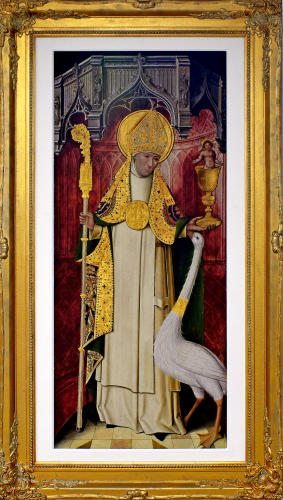 St. Hugh and his devoted swan stand prominently in the church office.

Hugh seemed marked early for prominence. Born in 1140 in a castle in France, he was ordained a deacon at 19, then made prior of a monastery five years later. As a young man, he joined the Carthusian order.

Fifteen years later, Hugh became abbot of the first Carthusian monastery in England. His hard work and honesty gained the respect of King Henry II, even after he began criticizing the king.

Henry retained the right to approve bishop appointments, and he often left the posts unfilled for years, taking their income for himself instead. But he finally relented, calling a council of bishops and barons to fill the vacancies.

The council chose Hugh as bishop of Lincoln, the largest diocese in England at the time. Yet he was so strict about procedure, he accepted the post only after three votes.

The new bishop quickly launched a range of reforms. He excommunicated the local forester and rejected Henry’s appointment for administrator of Lincoln Cathedral.

He even faced down Henry’s son and successor, King Richard I, despite the king’s reputation as “The Lionheart.” When fellow bishops collected funds for Richard’s foreign wars, Hugh refused to cooperate. The enraged king ordered the seizure of Hugh’s property, but no one had the courage to do so.

That king’s tenure was marked by a wave of anti-Semitic persecution, even in Lincoln. More than once, Hugh personally confronted mobs and ordered them to release their victims.

“If all the prelates of the Church were like him,” said an amazed Richard, “there is not a king in Christendom who would dare raise his head in the presence of a bishop.”

In Church matters, Hugh was both tough and devout, with a personal touch. He required his canons to live within the diocese, and he often visited his parishes.

Hugh maintained his own piety as well, returning to his old monastery each year for prayer. He became renowned for his charity to the poor, and even washed, embraced and kissed leprosy patients. 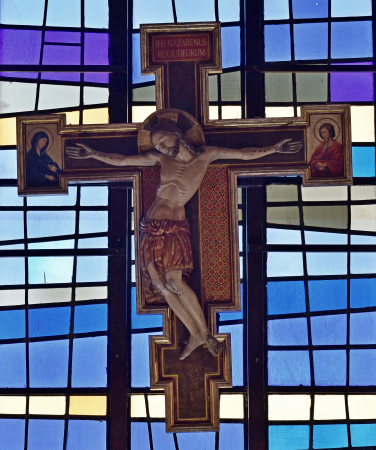 And the swan? It flew in at Stow, the site of Hugh’s manor, as he was taking office as bishop of Lincoln. From one description, it was probably a whooper swan, an enormous bird that can grow more than five feet tall with a wingspan up to nine feet. And the one who befriended Hugh was said to be larger and stronger than other swans.

The bird followed him around, taking food from his hand, resting its head on his chest, even guarding him as he slept. And when anyone else approached, it shrieked and spread its wings until Hugh told it to back down.

Somehow, the swan even knew when the bishop was going to die. The last time Hugh came home, the bird hung its head, listless. Six months later, the bishop fell ill and died in London. The swan lived several more years, but never took to anyone else.

Hugh was declared a saint two decades after his death. He's known as the patron of the sick, shoemakers, and of course swans.

In Coconut Grove, St. Hugh Church was founded in 1959, the year after the birth of the archdiocese itself. Its first Mass was celebrated at the Playhouse Theater, then at a local elementary school.

In 1960, founding Bishop Coleman F. Carroll blessed the church building, with its distinctive metal roof and coral walls. With its inward-curving beams, the roof has been likened to an open book or an upside-down boat hull.

St. Hugh Church has become known for its outreach to the multi-ethnic, multicultural communities of Coconut Grove. The Grove Outreach program, founded by one of St. Hugh’s pastors, offers food, medical care and legal aid to needy families.

Even the stairwell at the rectory has an imposing piece of art: Jesus being given his cross to carry to Calvary.