MIAMI | Father William Muñiz was a "father" in every sense of the word.

He was a spiritual father to Christian communities in Nicaragua, Texas and South Florida. He was a biological father to his three sons, a grandfather of five and a husband for 63 years to his wife, Olga.

A former Episcopal priest who was ordained for the Archdiocese of Miami in 1994, Father Muñiz died the evening of July 31, 2020, of complications from COVID-19. He died at the same hospital, Holy Cross in Fort Lauderdale, where he ministered as a chaplain until 2012. 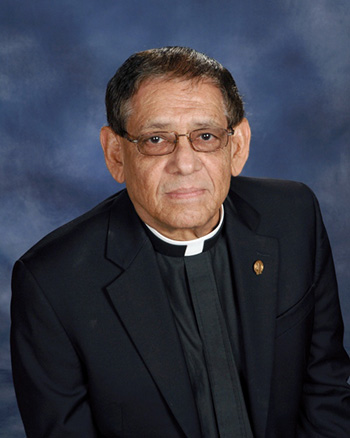 Father Muñiz was 85 and had marked his 25th anniversary as an archdiocesan priest last year. Before that, he had been a priest in the Episcopal Church for 27 years.

"He had a positive COVID test and just went downhill from there," said his middle son, William D. Muñiz.

"He was not sick. He was very agile, very entertaining, made people laugh," said Father Francis Akwue, pastor of St. Henry Church in Pompano Beach, where Father Muñiz started a ministry to Hispanics in 2015 — three years after his retirement from fulltime ministry.

"The history of St. Henry would not be complete without him because he started the Spanish work here, the apostolate to the Spanish-speaking," Father Akwue said.

The parish was planning to start a novena of Masses for Father Muñiz Aug. 3, 2020. "We expect the Spanish-speaking will fill the church today and many other days to come," Father Akwue noted.

"His call (came) when he was in his 30s," said son William. Prior to that, Father Muñiz worked as general manager for LANICA Airlines in Miami, and before that for Pan American Airlines in his native Nicaragua.

"He just decided to do more of God's work instead of the rat race," said William Muñiz, who often served on the altar when his father celebrated Mass and accompanied him to food and toy giveaways for the poor.

"He was an individual who wanted to always help the poor," said Muñiz. "He set up a clinic in Nicaragua for the low-income people. He established missions throughout the coast of Bluefields in Nicaragua. So he was very (good at) spreading the Lord's mission and God's presence."

After the massive 1972 earthquake in Nicaragua, Father Muñiz gave food and shelter to "hundreds of families" in the yard of his house, according to a brief history compiled by his other son, Allen Muñiz. For his efforts, Father Muñiz was interviewed by Good Morning America and Time magazine.

In Nicaragua, Father Muñiz also founded a rehabilitation center for people addicted to drugs and alcohol, which he named St. Luke's. Decades later in Miami, he worked as director of outpatient services at St. Luke's, a similar center operated by Catholic Charities.

"He was very active and very dedicated," said his son William, recalling that their family life, along with his father's ministry, was "a team effort" with his mother, Olga. "It was beautiful."

"He was always positive and always trying to make everybody happy and breaking the ice," Muñiz recalled. "He was a rascal in that way, I guess. He always made people comfortable."

He stressed that his father had a knack for making people feel like they belonged in the church, to the point that they did not just attend Mass but got involved in various ministries.

"That was the rewarding part from the congregation itself, to feel that they were part of the mission," Muñiz said.

Father Muñiz was born in Nicaragua June 23, 1935, one of seven siblings. He attended Lee University, a private Christian university in Cleveland, Tennessee, and was ordained as an evangelical minister. Upon his return to Nicaragua he met and married Olga and began his work with the airlines.

The family left Nicaragua in 1979 and moved to Sewanee, Tennessee, where Father Muñiz attended the University of the South. He also attended Vanderbilt University in Nashville, obtaining a doctorate in theology.

The family then moved to Texas, where he worked for the Episcopal Diocese of the Rio Grande in New Mexico and Southwest Texas. He founded more missions in Dallas and El Paso before deciding to seek ordination in the Catholic Church.

He retired from fulltime ministry in March 2012 but continued to help at St. Henry and other parishes in Broward County.

This article has been corrected and amplified since it was first posted. Funeral arrangements have been added, as have the names of Father Muñiz's daughters-in-law; and the last name of his sister has been corrected.