MIAMI | A transplant from Minnesota, Father William Bowles made himself at home at St. John the Baptist Church in Fort Lauderdale, where he served from 2004 until his retirement in 2020.

“He was a gentle, kind, loving, caring, pastoral priest,” said Msgr. Vincent Kelly, pastor at St. John the Baptist. “He was very much respected by our parishioners. He visited many of their homes, the sick. His great joy was the Bible study group which we had here.” 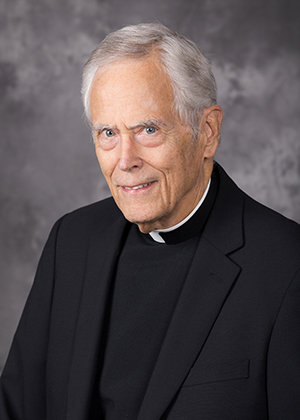 The parish has two weekly Bible study groups, one in the afternoon and the other in the evening. Father Bowles led the evening one.

“He prepared for that for days. But he loved it and the people thoroughly enjoyed it,” Msgr. Kelly said. “We will miss him.”

Father Bowles died July 27, 2021, at Catholic Health Services’ Villa Maria Nursing Center in North Miami. He was 87 and had retired from active ministry on July 1, 2020. A late vocation, he was ordained for the Diocese of New Ulm, Minnesota, on Jan. 19, 1991, after a 30-year career as a marketing and advertising executive. After working as parochial vicar in his home diocese, he moved to South Florida in 2004 to be closer to family.

Father Bowles was born in Chicago on March 6, 1934, and grew up in Highland Park, Illinois, before moving to Minnesota. He graduated from Marquette University in Milwaukee with degrees in economics and philosophy, then served in the armed forces during the Cold War, stationed in Germany.

Msgr. Kelly noted that “EWTN was his favorite channel. He was a great admirer of Mother Angelica. He watched that almost every night.”

In an obituary, those who knew him described a man with an “amazing smile [and] ready sense of humor ... a beautiful person with a kind and gentle soul.” The obituary also noted that “Father Bowles loved his Irish heritage and enjoyed that common bond with Monsignor Kelly. The rectory staff, the parish ministries, the church volunteers and the parish community were an important part of his parish family.”

Speaking of family, the obituary continued, “Father Bowles’ family, friends and parishioners could count on him to be ‘present’ at family gatherings, funerals, and weddings. When we say ‘present’, we mean that in the very essence of the word. He did not just ‘show up’, he was there to engage, show love and share God's word. He wrote, ‘I would like to share the most important truth I carry deep in my spirit, faith in my strongest belief possible: The whole reason we are living on this earth is to work out the destiny God has held open to each of us’.”

Funeral services will take place Wednesday, Aug. 4, at St. John the Baptist Church, 4595 Bayview Drive, Fort Lauderdale. A viewing from 9:30 to 10:45 a.m. will precede the Mass at 11 a.m. Burial will follow at Our Lady Queen of Heaven Cemetery in North Lauderdale.