Taught music, led choirs, made 'joyful noise unto the Lord' for five decades in Florida

ADRIAN, MICHIGAN | Sister Mary Tindel, an Adrian Dominican who put her musical gifts to work for the Archdiocese of Miami for most of her 67 years in religious life, has died at the age of 86.

Her death was unexpected, and took place Feb. 28, 2021, at Memorial Hospital West in Pembroke Pines. 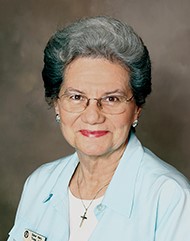 “She was one with her music, her students and her piano,” wrote Sister Mary Ann Caulfield, prioress of the Florida chapter of the Adrian Dominican congregation, in a reflection that was read at Sister Mary’s wake, which took place at the motherhouse in Adrian, Michigan, March 3, 2021.

“It appears that most people have blood running through their veins. I wonder if Mary did not have an equal amount of music flowing through hers,” Sister Mary Ann wrote, noting that 98% of Sister Mary’s religious life was spent teaching music and directing choirs. “At all times, Mary was determined to ‘make a joyful noise unto the Lord.’”

Sister Elizabeth Worley of the Sisters of St. Joseph of St. Augustine, who serves as chief operating officer and chancellor for administration in the Archdiocese of Miami, also remembered Sister Mary’s talent for turning liturgical music into prayer.

“Sister Mary Tindel was the music director and cantor at the Cathedral of St. Mary when I joined the choir there, and I sung under her direction for several years,” Sister Elizabeth recalled. “It was at Sister’s invitation that I began as a cantor at the cathedral and still continue regularly in that role. Skilled on the piano and organ as well as voice, liturgical music well performed as prayer was always her goal and inspiration.”

Sister Mary was a native Miamian, born April 28, 1934. She attended St. Mary’s (now the cathedral) elementary school and graduated from what was then St. Patrick High School in Miami Beach. According to her brother, John Tindel, who lives in Indianapolis, Indiana, she turned down full scholarships to Julliard and the University of Miami to join the Adrian Dominicans.

She entered the community Sept. 6, 1952, was received Aug. 8, 1953, and made her first profession a year later. She ultimately received a Bachelor of Music degree from Siena Heights College (University) in Adrian and a Master of Musical Education degree from Florida State University in Tallahassee.

After initial assignments in Farmington, Michigan; Toledo, Ohio; and St. Petersburg, Florida, Sister Mary arrived in Fort Lauderdale and taught music from 1962 to 1964 at Our Lady Queen of Martyrs School. She then served as an elementary and high school teacher in Tallahassee until 1969, when she returned to St. Patrick as a music teacher.

After that, she remained in South Florida except for a 10-year assignment in Guayama, Puerto Rico. While in South Florida, she taught six years as Barry University, Miami Shores (1970-76), and one year at Carrollton School in Coconut Grove (1976-77).

She spent two years as director of music and liturgy at St. Rose of Lima Parish in Miami Shores (1977-79) before helping to start the archdiocesan Office of Worship, where she served as associate director from 1979 to 1980.

She then served two years as director of music at the archdiocese and St. Mary Cathedral (1980-82); and two years as liturgical director and school music teacher at St. Agnes Church in Key Biscayne as well as St. Thomas University in Miami Gardens (1992-94). She remained at St. Thomas as coordinator of liturgical music from 1994 to 2001.

In addition to her brother, Sister Mary is survived by a nephew and her Adrian Dominican Sisters, especially her friend, housemate for many years, and fellow liturgical musician, Sister Helene Kloss.

Funeral services were held in Adrian, Michigan, the evening of March 3 and morning of March 4, 2021, and may be viewed at this link: https://adriandominicans.org/Meet-Dominicans/In-Memoriam/sister-mary-tindel-op-carl-mary.