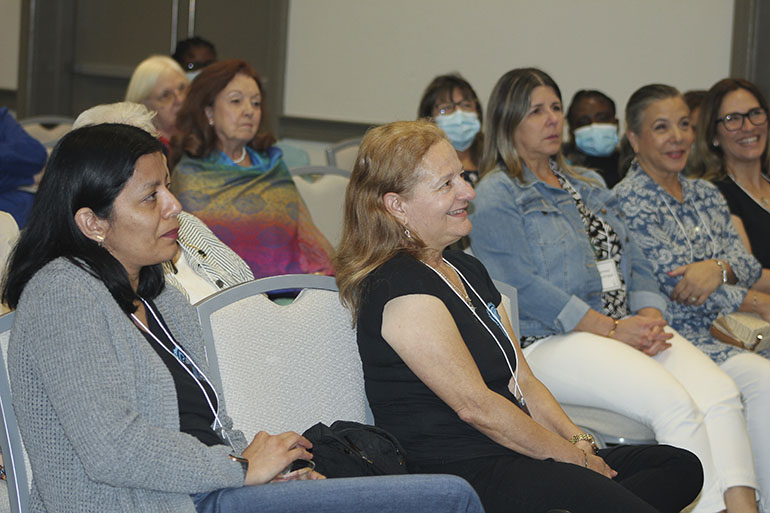 Members of the Council of Catholic women from parishes around the archdiocese enjoy one of the talks during their 62nd annual convention, held April 29-May 1, 2022, in Deerfield Beach and themed "Expect great things from God." 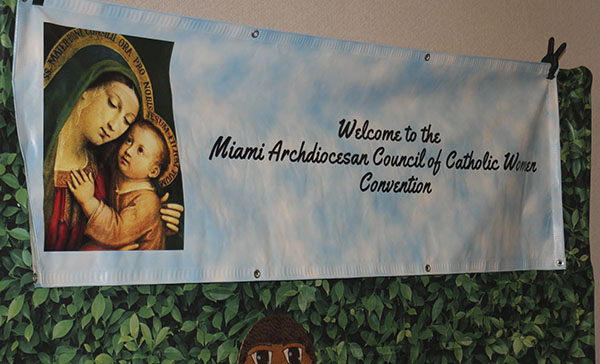 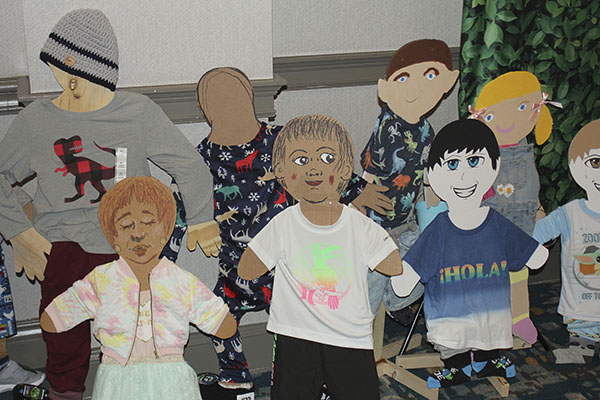 Cardboard dolls wearing little girls and little boys clothes are displayed at the annual convention of the Miami Archdiocesan Council of Catholic Women. The dolls are part of a community campaign by the women and the National Council of Catholic Women to raise awareness and affect public policy regarding neglect and abuse of children. The MACCW's 62nd annual convention took place April 29-May 1, 2022 in Deerfield Beach.

DEERFIELD BEACH | After a two-year hiatus due to the pandemic, members of the Miami Archdiocesan Council of Catholic Women gathered to celebrate in a big way: their 62nd annual convention featured a lineup of social and spiritual activities, talks, and the announcement of a new Golden Rose Award.

“It is my sincere desire that this convention is an event where all connect with God and others,” said archdiocesan council president Marliese Ljuba in her greeting.

The convention was an opportunity for the women to come together again and get reacquainted. Nearly 125 council members from parishes throughout the Archdiocese of Miami participated April 29-May 1, 2022. Ljuba also extended a special welcome to three ladies from the U.S. Virgin Islands.

After a first day filled with board meetings, a social and dinner, the women gathered Saturday to honor Mary. Convention organizers brought back the Living Rosary devotional that had stopped for some reason six years ago. Participants formed a circle around the meeting room, and each took a turn leading the prayer.

One of the highlights of this convention was the inaugural Golden Rose Award. During Saturday’s luncheon, the women presented a high school student active in parish life and service with the archdiocesan council’s first Golden Rose. 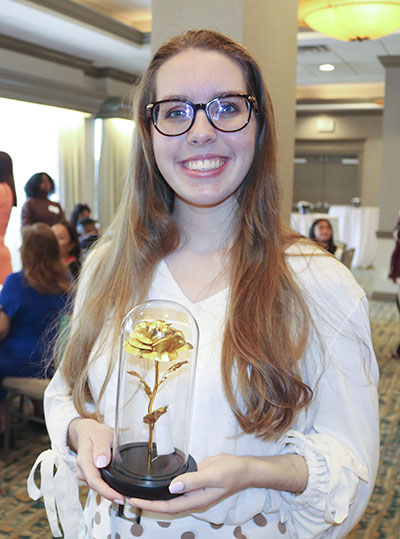 The Miami Archdiocesan Council of Catholic Women's Golden Rose Award recipient, Grace Chaffins, is all smiles after receiving the council's first award, presented April 30, 2022. She is active at Our Lady of Lourdes Parish in Miami, is homeschooled and will graduate in June. 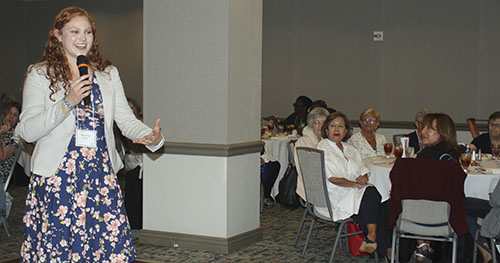 Chloe Spinger, 17, the 2020 Golden Rose Award winner for he Diocese of Venice, was the main speaker during the Miami Archdiocesan Council of Catholic Women's Golden Rose awards luncheon held on the second day of their 62nd annual convention, April 29-May 1, 2022, in Deerfield Beach.

In all, pastors endorsed 28 candidates from various parishes for the recognition. Grace Chaffin, a parishioner at Our Lady of Lourdes in Miami and a homeschooled student graduating in June, received the award.

“I was so surprised,” said Grace. “I didn’t expect this recognition. I am honored.”

Grace was selected for her outstanding skills in leadership, spirituality and service, according to Ljuba, who confessed that selecting one young lady out of the many outstanding candidates was not an easy task for the selection committee.

“The recipient receives the Golden Award, an individual membership in the National Council of Catholic Women, and a check for $250,” said Ljuba. “We sent out letters to all the parishes. We wanted to give all the youth an opportunity. I am passionate about the youth.”

She is hoping the award will not only bring awareness about some of the faithful and service-minded young people of the archdiocese but also shine a light on the council, keeping it alive by attracting members from the younger generation. “With the award, they will always remember the council,” she said.

Grace, 18, has served her parish since she was a little girl, taking on roles of altar server and cantor. She has also been active in a variety of ministries, movements and fundraisers.

She said she hopes to go into the medical field and is passionate about prolife, participating in and organizing fundraisers for pro-life ministries and programs. She took part in last January’s March for Life in Washington, D.C., and founded a Students for Life group, part of a non-profit, national anti-abortion organization.

Despite her youth, Grace also has dedicated time to helping the homeless through volunteer work with various ministries and programs, while mentoring youngsters who want to serve at the altar at her parish. She has also participated in outreach to the sick and homebound through her parish.

Chloe Springer, a high school senior and 2020 recipient of the Diocese of Venice Golden Rose Award, was guest speaker at the luncheon. “I think the Golden Rose Award is a beautiful representation of what it means to be a leader in your community, and it shows what you have been doing in your parish,” said the young woman from Fort Myers, who was involved in several ministries and outreach programs at her parish of St. John XXIII. “I was honored to get the award two years ago.”

During the luncheon, recipients of the Lucy Petrillo Scholarship Award also were announced. Every year for the past 26 years, the council sends essay applications to Catholic school principals in the archdiocese, who then invite eighth-grade girls to submit a personal essay about their desire to continue their education at a Catholic high school.

Five girls who received scholarships valued at ,000 each from the Miami Archdiocesan Council of Catholic Women pose with their certificates. The scholarship money will help the girls, all attending Catholic elementary schools. Shown, from left, are Yardora Bayard of St. Mary Cathedral School, Julie Nguyen of St. Helen School, Astrid Cadevilla of Our Lady Queen of Martyrs School, Rosedele Joseph of St. James School and Amanda Desravines of Annunciation School. The presentation took place on the second day of the MACCW's 62 annual convention, held April 29-May 1, 2022, in Deerfield Beach.

To date, over $316,000 in scholarships have been awarded to over 71 recipients, according to Mary Weber, chair of the council’s scholarship committee. Out of 39 applicants, five girls were chosen this year to receive a scholarship of $5,000 each to attend the Catholic high school of their choice.

The recipients were St. Mary Cathedral’s Yardora Bayard, who will be attending Msgr. Edward Pace in Miami Gardens; St. Helen’s Julie Nguyen, who will be attending Cardinal Gibbons in Fort Lauderdale; Astrid Cadevilla of Our Lady Queen of Martyrs, who will be entering Archbishop Edward McCarthy in Southwest Ranches; St. James’ Rosedele Joseph, who will attend St. Thomas Aquinas; and Amanda Desravines of Annunciation in West Park, who also will enter Msgr. Pace.

“I am very happy,” said recipient Julie Nguyen, 14. She attended the luncheon with her two little brothers and her mother, who said she was delighted that her daughter received the award.

“Cardinal Gibbons High School is a great school. I want to get a good education to help get a good job to provide for my family,” said Julie, who is looking toward a career in medicine. 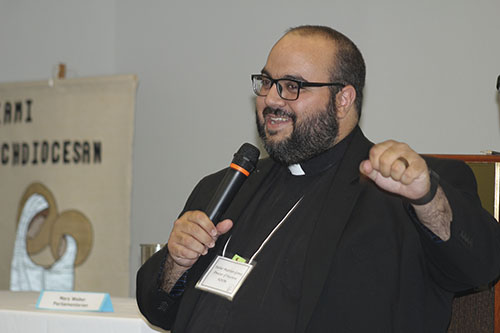 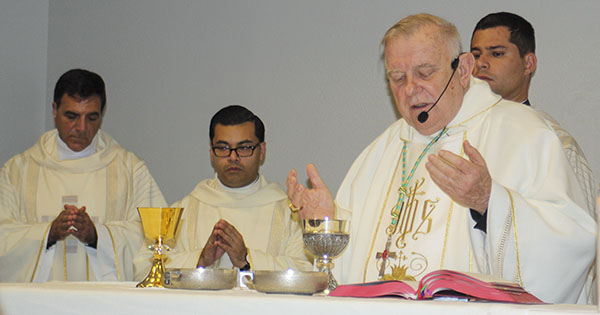 Archbishop Thomas Wenski is the main celebrant during Mass on the second day of the Miami Archdiocesan Council of Catholic Women's convention, held April 29-May 1, 2022. Concelebrating with him are Msgr. Michael Souckar and Father Yamil Miranda. Also shown is Deacon Enzo Rosario Prendes, who would be ordained a priest a week later.

Father Matthew Gomez, archdiocesan vocations director, also spoke at the convention. “I have the greatest job in the world,” he said. “I get to talk about Jesus and the priesthood.”

He asked the women to pray for vocations and to keep their eyes open for any potential young priest in the pews at their parish or young women who might have a calling to religious life and need a little nudging and support.

“I will finish with these words,” he said. “Life with Christ is a wonderful adventure. I thank God every day that he has called me to be a priest. Pray for the guys who are getting ordained. Pray for the seminarians and pray for the men entering the seminary. Pray for me.”

“It is always a joy for me to be with you to celebrate Mass — whether here in South Florida or in Tallahassee,” the archbishop told the women. “And it is certainly a joy to come together — in person — after two years of being at a distance because of the pandemic that has disrupted our lives.”

He encouraged those present to be faithful to God and to be bold in standing up for the Catholic faith and passing it on to others through their word and through their witness of service. “Opening our hearts to others and their needs – recognizing Jesus in the person of the prisoner, the migrant, the hungry — is an opportunity for each one of us for salvation and blessedness.”

The day ended with a social followed by a banquet, during which the women presented the archbishop with $3,500 for the archdiocese’s Burse Fund, which helps pay for the education of seminarians. Another check for nearly $7,000 went to Catholic Charities’ shelter for unaccompanied minors, the Msgr. Bryan O. Walsh Children’s Village. 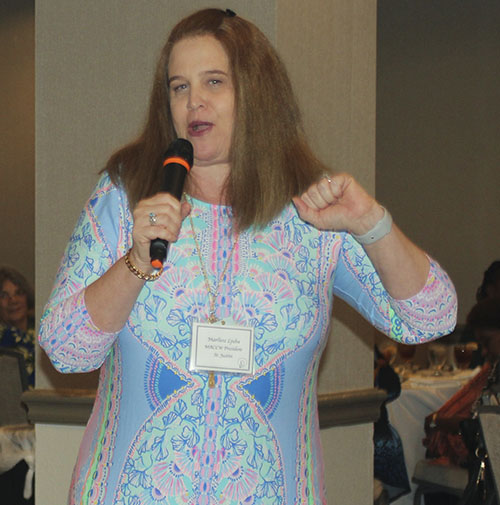 Marliese Ljuba, president of the Miami Archdiocesan Council of Catholic Women, welcomes attendees to the Golden Rose Award luncheon on the second day of the women's 62nd annual convention, held April 29-May 1, 2022, in Deerfield Beach.

At the close of the convention, the council installed new officers. Ljuba, a parishioner of St. Justin Martyr in Key Largo, is ending her two-year term as president, a term that coincided almost totally with the pandemic. “I am the virtual president,” she said with a smile.

Her leadership role has been nothing short of a challenge, but she said she and the council weathered the storm. “We did everything virtually. We even had successful fundraisers.”

Karen Lorenzen of All Saints Parish now takes the helm as president. She has been a member of the council for 15 years. “I want to unite the women and grow the membership,” she said. 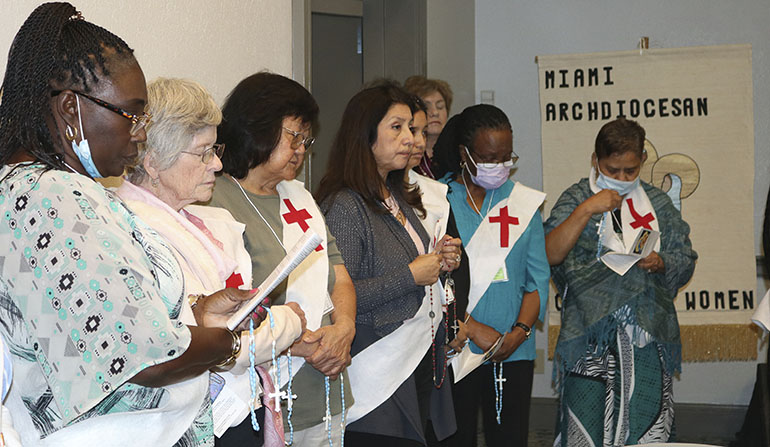 Participants at the 62nd annual Miami Archdiocesan Council of Catholic Women's convention take part in a Living Rosary, one of the spiritual events that highlighted the weekend gathering, April 29-May 1, 2022 in Deerfield Beach.