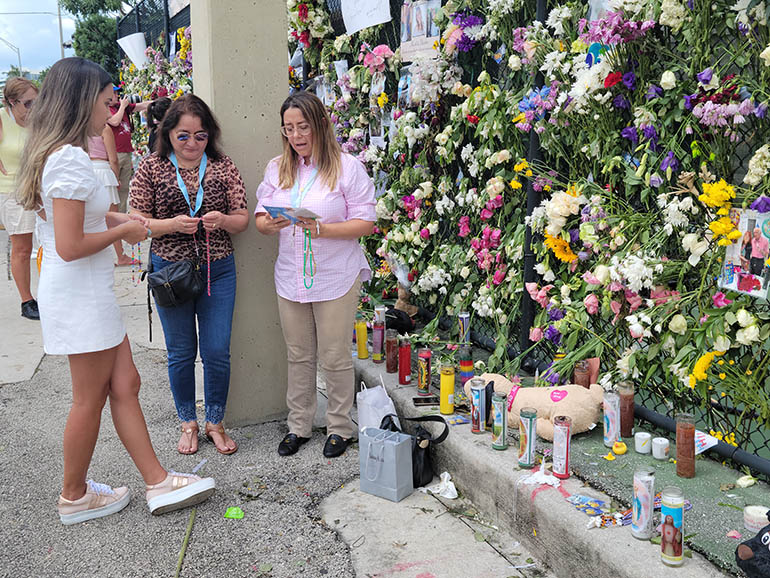 Paola Rendon, Marta Roca, and Jasmira Rendon, members of the Legion of Mary and parishioners of St. Kieran Church in Miami, pray July 2, 2021 at the memorial wall located at the tennis court across the street from the Champlain Towers South building. They placed Miraculous Medals of the Virgin of the Immaculate Conception along the memorial wall. The Legion has been praying for the end of the COVID-19 pandemic, and now for those affected by the building collapse.

MIAMI BEACH | Three women from St. Kieran Church in Miami arrived at the grounds of St. Joseph Church July 2, intent on a spiritual mission: to pray and deliver Miraculous Medals and prayer cards to the memorial wall near the collapsed Champlain Towers South building.

And after days of rain at the site, they also brought the sun.

“Yesterday it rained, and today we prayed to Our Lady for clear skies,” said Yasmira Rendon.

Along with her daughter, Paola, and her aunt, Marta Roca, they came representing the Legion of Mary chapter from their home parish, and the Daughters of Charity of St. Vincent de Paul in Miami. The religious order has been distributing the Miraculous Medal and accompanying prayer card throughout the archdiocese since last year, with the intention of praying for the end of COVID-19.

“We have been fulfilling this apostolate of distributing 6,000 cards, along with the Daughters of Charity. The idea is that as many people as possible pray for the end of the pandemic. That is why the medal, which is already blessed, is also accompanied by the (short) prayer to Mary, so that anyone that receives it can read it, even if it’s just one time,” said Rendon.

The cards briefly tell of the Virgin Mary’s request to St. Catherine Laboure, a Daughter of Charity, on Nov. 27, 1830: “Have a medal made according to this model. Those who carry it with confidence will receive infinite graces.” On the other side of the card, a prayer reads: “O Mary, conceived without sin, pray for us who have recourse to thee.”

Millions of medals were distributed during the Spanish flue pandemic in 1918.

“We have faith that the Virgin will help us this time, too,” said Rendon.

They also have faith that the Virgin will intercede during the recovery efforts at the Surfside building. When Rendon and her family arrived at the memorial wall, they were shaken by its proximity to the disaster site. They also found some Miraculous Medals already placed there. Undeterred, they added their medals to the wall. They also hung a few rosaries, and gave one to a woman who was visiting the wall nearby. Then they began to pray.

“This has been terrible,” said Rendon. “We are always in daily prayer. Since the pandemic began, we pray the rosary daily through Zoom. And this time, really since last week, we have focused on praying for the souls already departed, as well as having faith and hope that the hundred who are missing are alive.”

Update: Search and rescue operations became a recovery effort at midnight July 8, 2021. As of July  21, authorities said they had found and identified the remains of 97 victims, with one victim still unidentified.