MIAMI | Like many others, Pablo Amat found the pandemic lockdown and social distancing difficult. For the 17-year-old, however, the isolation led him to create a music video along with other teens.

The video, “From Our Generation to the World,” features kids ages 13 to 19, with some younger children as well. Singing, dancing and playing instruments, they perform the Grammy-winning song “Waiting on the World to Change,” by John Mayer.

At the heart of the catchy song is the younger generation and their desire for good change in the world. They wait for adults to step up and do something to make a difference.

The song was released in 2006, when Pablo was just a toddler. But the Immaculata-La Salle High student said it speaks to him. 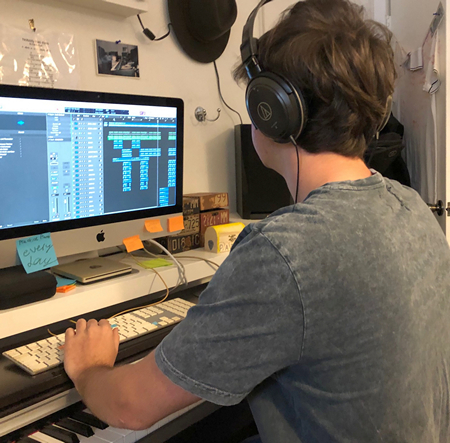 “It was a hit, and it has a powerful message,” Pablo said. “I personally have been needing something to get my hopes up. Over the course of the pandemic, I have seen a lot of musicians putting videos together. I realized there wasn’t a video with kids my age.”

During an interview, Pablo began singing a few of his favorite lyrics from the song:

He got the idea for the video in April and invited 60 friends to join him. Forty-six youths responded — from Colorado, Massachusetts and even Spain, as well as South Florida — volunteering to work behind the scenes as well as perform.

“I was excited,” said Sophia Orihuela, 17, a student at Immaculata-La Salle, who knows Pablo through her school’s fine arts program. “A bunch of us had a group chat, and he shared with us his idea.”

Sophia, an aspiring actress and former choir member at the Church of the Little Flower in Coral Gables, was all in.

“It is a way we can bring positivity at this time,” she said. “We want to send an inspiring message filled with hope. This time is only a fraction of our lives. It will make us better.”

Lourdes Nieto Ramos, also 17 and a fellow student at Immaculata-La Salle, offered to help. She is in the choir at Sts. Peter and Paul in Miami. 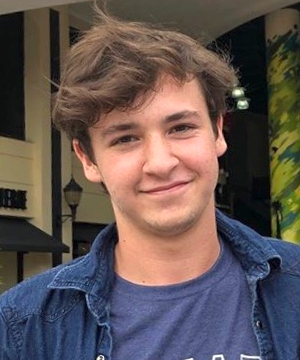 Pablo Amat, 17, a budding musician and student at Immaculata-La Salle High School in Miami, spoke to the Florida Catholic about his hope for the future.

“Everyone had so much fun making the video,” she said. “We want to say that our generation wants to help the world, and to help one another.”

Pablo, who sings, plays guitar and writes music, moved to Miami with his family seven years ago. He and his family attend Mass at St. Hugh, Coconut Grove. He is a former choir member at St. Lawrence in North Miami Beach.

In quarantine, Pablo has spent a lot of time with his parents and two brothers. They’ve all supported him through the development and making of his video.

Production took about two weeks for the video of nearly four minutes, but his family pitched in.

His brother Alvaro, 15, offered to play his violin, and Jacobo, 9, did some clapping for sound effects. Pablo’s father, Francis Amat, helped edit the video. And his mother, Paloma Amat, was there for encouragement.

“Pablo is a hard worker,” she said. “He is focused. He does everything with so much passion. He has a lot of dreams.”

What does he dream about for his future?

“I’d like to see more sympathy,” said Pablo. “There won’t be any major good change without sympathy. You never know what people go through or why they do what they do.”

He said he would also like to see changes in world hunger and global warming.

Pablo and his friends are among other youngsters, aged 8 to 23, classified as Generation Z. They grew up with technology and social media, and experts describe them as ambitious, passionate and tech-savvy.

“I believe that my generation will have to take care of things so huge and unknown that we’ll be remembered for it,” Pablo said. He mentioned challenges like global warming, epidemics and huge economic crises.

“This is why I believe that although we are a generation born with everything, we will be one of the strongest ones,” he said.

To see “From Our Generation to the World,” visit YouTube: https://youtu.be/LHROKHUOeA8

Here are the lyrics for "Waiting On the World to Change," by John Mayer. The song was made into a music video by Pablo Amat of Immaculata-La Salle High School, along with 46 young friends.

So we keep waiting
Waiting on the world to change

And when you trust your television
What you get is what you got
Cause when they own the information, oh
They can bend it all they want

It's not that we don't care,
We just know that the fight ain't fair

One day our generation
Is gonna rule the population