Seniors get vaccinated at San Lazaro 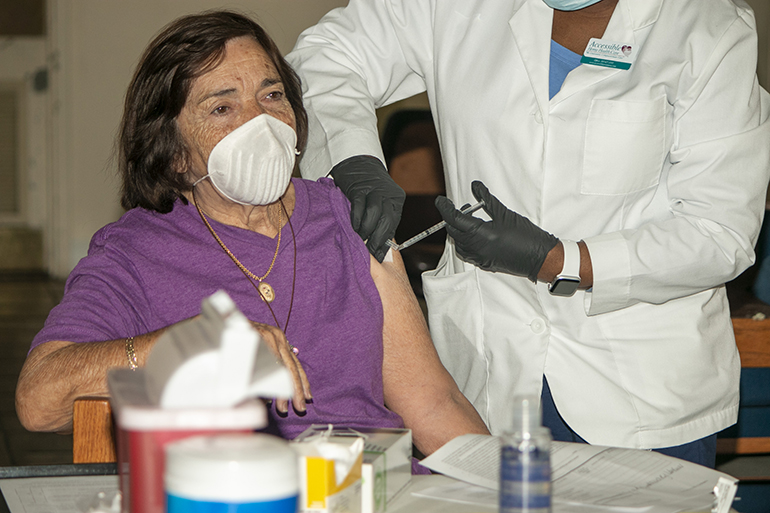 Reina Rodriguez, 85, a parishioner of St. John the Apostle in Hialeah, gets her first dose of Moderna's COVID-19 vaccine at San Lazaro Church in Hialeah, Jan. 20, 2021. San Lazaro became the first archdiocesan church to serve as a COVID-19 vaccination site, serving a total of 700 Hialeah and Hialeah Gardens residents age 65 and older, including 150 San Lazaro parishioners. The state-supported distribution was organized by Miami-Dade County Commissioner Rene Garcia, who represents the area.

HIALEAH | Two priests had to talk Yolanda Pérez into getting the COVID-19 vaccine: Her pastor, Father Jose Espino, and her son, Father Luis Perez, pastor of San Pablo Church in Marathon.

Father Perez made sure to check with her doctor, too.

Father Espino made it easy for her, too. She was one of 150 parishioners who got the vaccine at San Lazaro in Hialeah, Jan. 20, 2021. The parish was the first in the archdiocese to partner with government officials as a vaccine site, something Archbishop Thomas Wenski is encouraging. 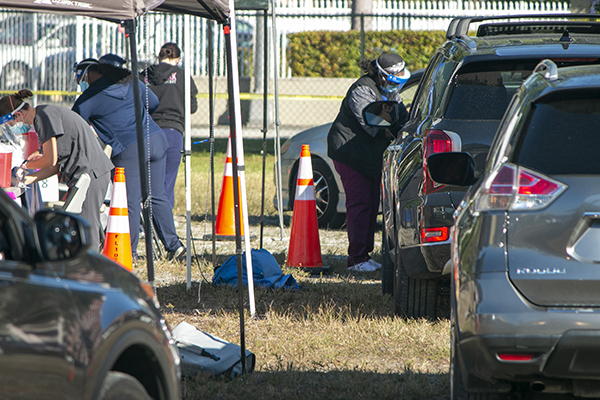 View of the drive-thru COVID-19 vaccine distribution that took place at San Lazaro Parish in Hialeah Jan. 20, 2021. Around 700 residents of Hialeah and Hialeah Gardens, age 65 and over, received their first dose of the Moderna vaccine, and will return in four weeks for their second dose.

San Lazaro offered its ample grounds as a drive-thru — with a few walk-ups —one-day distribution site at the request of Miami-Dade County Commissioner René García, who represents the area and was offered the doses by FEMA – the Federal Emergency Management Agency, according to Father Espino.

A total of 700 elderly residents of Hialeah and nearby Hialeah Gardens received their first dose of the Moderna vaccine at the church. They will return there in four weeks for their second dose.

“We had worked together for food distribution and we had the space,” Father Espino explained, referring to Commissioner García. “We’re offering this for the community. It’s not a parish event. This is to help the community.” 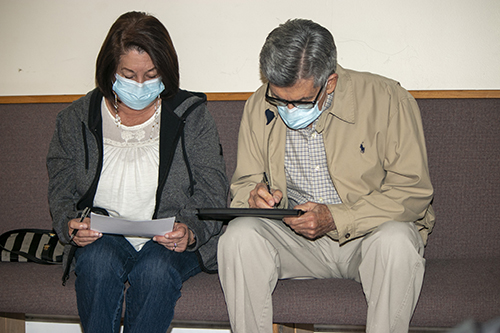 Elizabeth and Dagoberto Rodriguez, 75 and 79 respectively, fill out health information before getting the Moderna COVID-19 vaccine at their parish, San Lazaro in Hialeah, Jan. 20, 2021.

But he did send out an email blast to all his 65-and-older parishioners, urging them to sign up for an appointment.

“I’m urging people as soon as they can to get vaccinated,” said Father Espino, who won’t be able to do so himself until he turns 65 in April. But the archdiocese’s retired priests and those over 65 have already done so, as has Archbishop Wenski.

Longtime San Lazaro parishioners Elizabeth and Dagoberto Rodriguez had no qualms about getting the vaccine.

The couple, San Lazaro parishioners since its founding, have remained pretty much in quarantine for the past nine months, going out only for essentials and attending Mass in person only on Fridays, when there are fewer people around. It’s a suggestion Father Espino gives to parishioners who are wary of being in crowded spaces.

After getting her shot without even wincing, Elizabeth said, “I didn’t even feel it.” 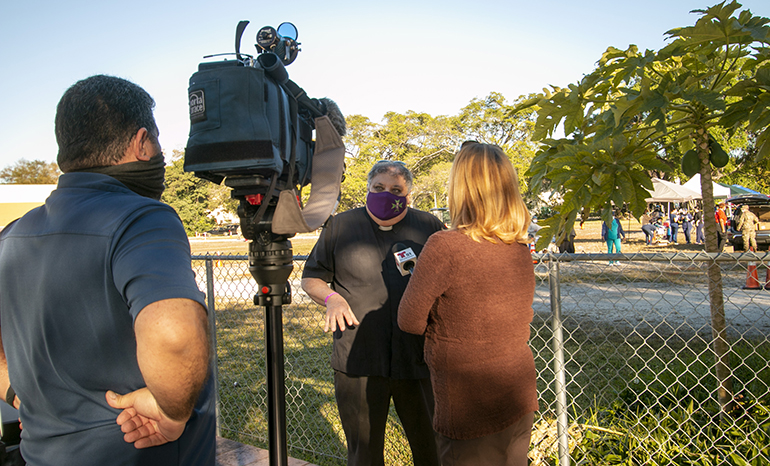 Father Jose Espino, pastor of San Lazaro Parish in Hialeah, speaks with a reporter from Telemundo 51 as the vaccinations get underway behind him, Jan. 20, 2021.