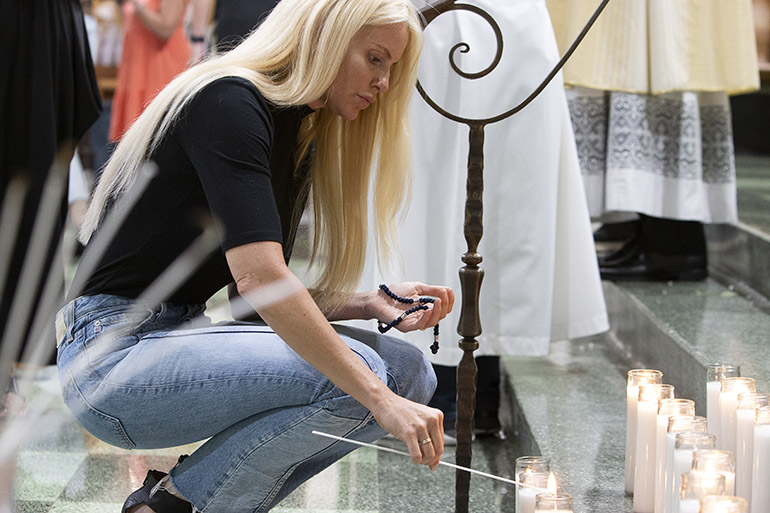 Holding a rosary, a woman lights a candle during the memorial Mass marking a year since the Champlain Towers South collapse. St. Joseph, the church nearest the collapse site, marked the one-year anniversary of the Surfside tragedy with a Mass and the lighting of 98 candles for each of those who perished, June 24, 2022. 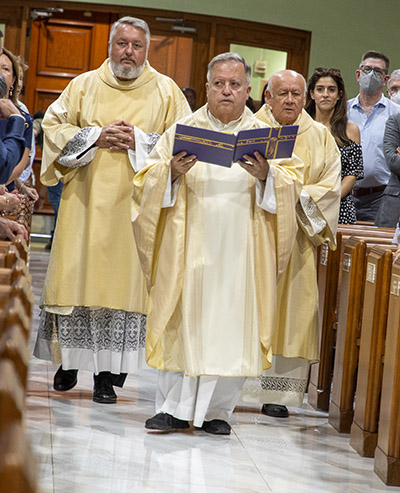 Father Juan Sosa, pastor, enters St. Joseph Church carrying the book where people inscribed the names of those they were praying for in the days after the collapse of Champlain Towers South.

Lopez, along with her husband, Alfredo, and son Michael, now 25, escaped wearing their pajamas, shoes and glasses and carrying their cell phones.

“We had nothing when we left,” Lopez said after marking the one-year anniversary of the collapse of Champlain Towers South at a memorial Mass at her parish, St. Joseph.

The church sits less than two blocks away from where Champlain Towers South stood. The building was visible from the church’s parking lot. Immediately after the collapse, and during the three weeks of search and recovery that followed, the church served as a place of prayer and respite for surviving families, grieving relatives of those who perished, first responders and even journalists covering the tragedy.

Lopez called the church “my safe place” and its parishioners “my church family.”

She acknowledged that her family was lucky. They got out alive. But “it doesn’t mean I’m not suffering,” she said. Sure, they only lost property, but “attached to property are emotions and memories.”

The Lopezes lost their home of 23 years. After moving in with her in-laws, they found another place near downtown Miami, but are still looking for a permanent home. All three have been going to therapy.

They also pray as a family every night before dinner, prayers led by their son, who “has a very strong faith,” Lopez said. Michael served at the altar during the memorial Mass. 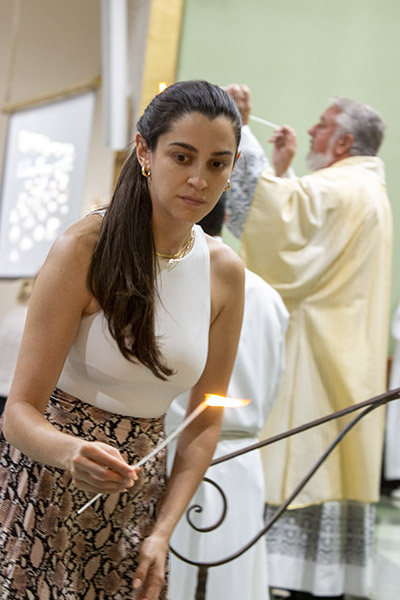 Jennifer Urgelles, an Our Lady of Lourdes Academy alum whose parents, Mercedes and Raymond Urgelles, perished in the Champlain Towers South collapse, lights a candle during the memorial Mass marking a year since the tragedy, celebrated June 24, 2022 at St. Joseph Church, Miami Beach. 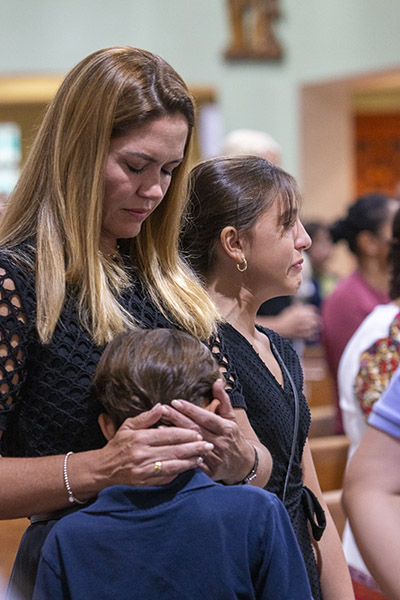 Tatiana Amara comforts her children, Isabella Cisternino, 11, and Luca Cisternino, 9, during the Mass. Isabella's best friend, Lucia Guara, perished along with her brother and parents in the Champlain Towers South collapse. Isabella and Lucia had made their first Communion together at St. Joseph, which hosted the memorial Mass on the anniversary of the tragedy, June 24, 2022. 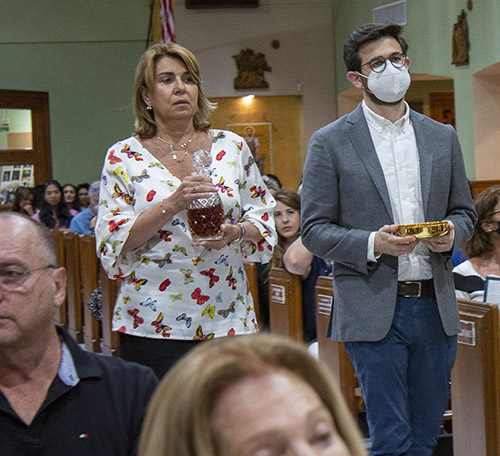 Carla Guerrero takes up the offertory with Daniel Urgelles whose mother, Guerrero's best friend, died in the collapse of Champlain Towers South, during the memorial Mass celebrated at St. Joseph, the church nearest the collapse site, to mark the one-year anniversary of the Surfside tragedy, June 24, 2022.

“The beginning was very difficult,” she recalled, citing spiritual and emotional exhaustion as well as survivor’s guilt.

“I was begging, begging God to strengthen my faith and keep my eyes on him. Without faith, I don’t know how anyone can get through something like this and move forward,” Lopez said.

She credited her husband’s family, her “dearest friends,” and the community agencies who descended on Surfside for helping her family get through the year.

“I was overwhelmed by the amount of generosity and empathy and compassion that people showed me,” she told the Florida Catholic. After a year of pandemic lockdowns, of people feeling isolated and impatient and angry, she added, “It was like, wow! All of a sudden, the love.”

The community’s compassion provided a kind of theme for the memorial Mass, which began with the recital of each victim’s name as relatives, friends or parishioners walked up to light a candle: 98 in all, 49 on each side of the sanctuary, all lit from the paschal candle — symbolizing resurrection — located in the middle. During pauses between names, the choir sang “You’ll never walk alone.”

As he entered the church, St. Joseph’s pastor, Father Juan Sosa, carried a book he had placed next to the paschal candle a year ago; a book where people had written the names of those who were missing, those for whom they were praying. Eventually, the remains of all 98 were recovered.

In his homily, he quoted the words of a family member who had lost a loved one in the collapse: “Our hearts are broken.”

“But for how long?” Father Sosa asked. “Even hearts that are broken can find healing and strength in their faith and in the companionship of those who care.”

Indeed, that’s what the clergy and people of St. Joseph provided to the grieving families of Surfside.

Carla Guerrero can attest to that. She and her husband had owned a condo in Champlain Towers South for 18 years. They went there every weekend. On the Thursday morning when the building fell, they were not present.

But her best friend of 29 years, “my second lung,” Guerrero said, was not as fortunate. Mercedes and Raymond Urgelles had moved into the building to be closer to Carla and her husband, Cesar. Their sons had been friends since third grade. Both had gone on to graduate from Belen Jesuit Prep.

“My [Jesuit] spiritual director has helped me from day one,” Carla Guerrero said. “My community here has helped me a lot. My beliefs have kept me from not being desperate. Thank God I have not touched that desperation.”

She is not sure whether she will buy another condo on the beach, she said. “What I know is I’m not going to leave St. Joseph Church. This community has been amazing to all of us.”

“From that fateful day when all of our hearts were broken, this congregation has stood strong with all of those suffering,” agreed Miami-Dade County Mayor Daniella Levine Cava, who was present throughout the Mass. “Everybody here was part of the community that took care of others.”

She echoed the words of Father Sosa in his homily, when he asked, “What lesson, if any, have we learned from Champlain Towers 2021? Are we a more caring person for the world in which we live, for our country, and especially for the people around us?” 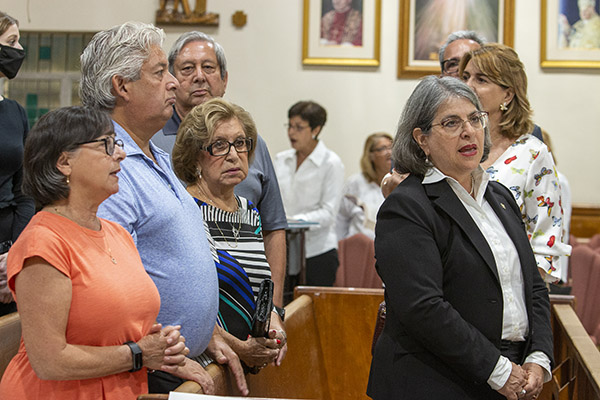 Marian and Alfredo Lopez, at left, who escaped with their son the collapsing Champlain Towers South where they had lived for 23 years, take part in the memorial Mass for the victims of the collapse; in front is Miami-Dade Mayor Daniella Levine Cava. St. Joseph, the church nearest the collapse site, marked the one-year anniversary of the Surfside tragedy with a Mass and the lighting of 98 candles for each of those who perished, June 24, 2022.

The mayor said the biggest lesson, for her, is that “indeed, we are all connected across faiths, across nationalities, across languages, traditions, and in our darkest moments that connection is what really shone so bright.”

Lopez and Guerrero both told the Florida Catholic they don’t ask why the tragedy befell them and their friends.

“We know we’re going to get to a better place, and I know I’m going to see her [Mercedes] one day,” Guerrero said. “God has his plans. We think we have everything under control and it’s not that way.”

“I never stopped believing that God loves me, will take care of me, will provide as he has in this last year,” Lopez said. “God has brought us through everything so far. I know he’s going to bring me through this.”

Both said the memorial Mass on the one-year anniversary was one more step in a long journey toward healing.

Another step for Guerrero: She and her family were traveling to Germany that same weekend for the wedding of her best friend’s son, Daniel Urgelles. He and his sister, Jennifer, a graduate of Our Lady of Lourdes Academy, also took part in the Mass.

“I know [Mercedes] would have loved to be there,” said Guerrero, “but her spirit will be there with us.” 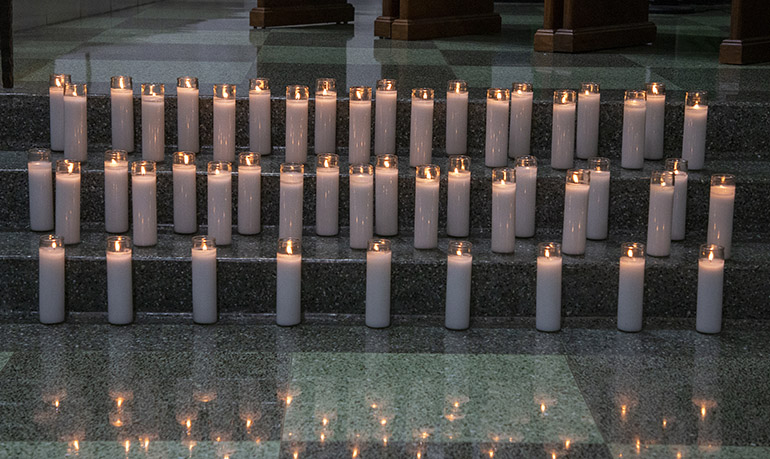 98 candles: 49 on each side of the altar, served as a reminder of those lost in the collapse of Champlain Towers South on June 24, 2021. St. Joseph, the church nearest the collapse site, marked the one-year anniversary of the Surfside tragedy with a Mass and the lighting of 98 candles for each of those who perished, June 24, 2022.