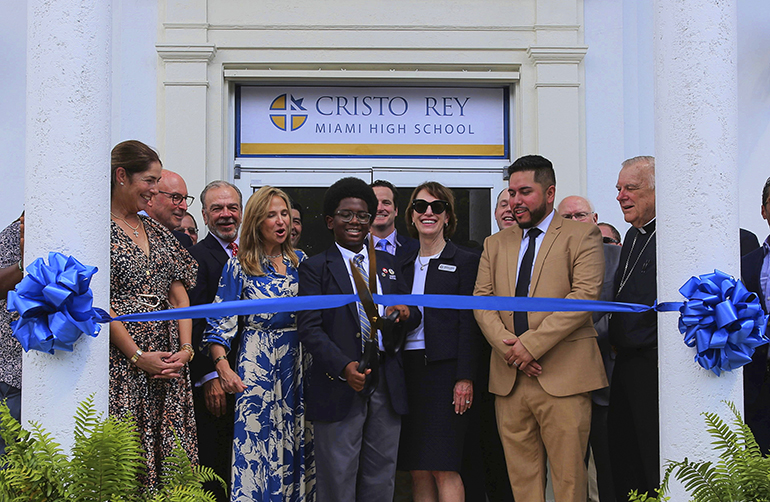 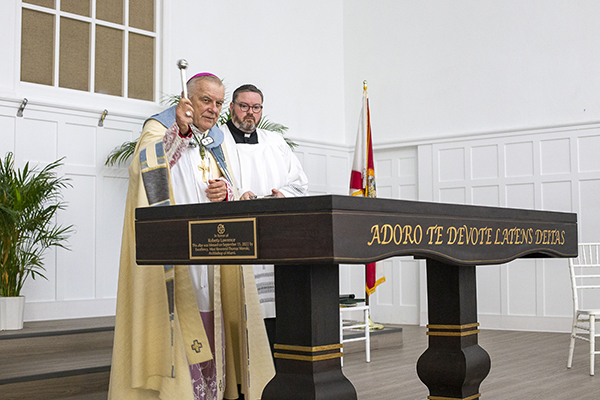 Archbishop Thomas Wenski blesses the new altar at Cristo Rey High School in North Miami, Sept. 15, 2022. Donated by an anonymous benefactor, it was dedicated in honor of Roberta Lawrence, wife of David Lawrence, a founding member of the school's board of trustees, and a longtime advocate of children and education. 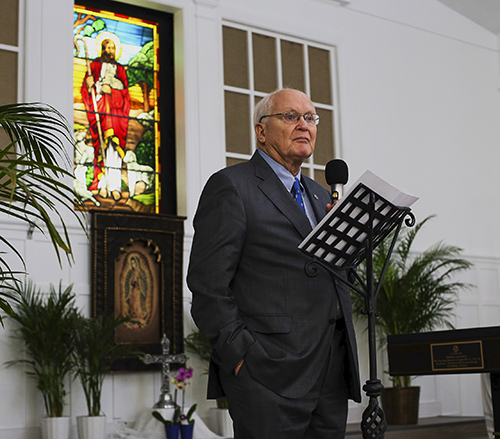 David Lawrence, founding member of Cristo Rey High School's board of directors, addresses the audience at the ribbon-cutting and school dedication, Sept. 15, 2022.

“We are the school that works,” said Amelie Ferro, the school’s director of corporate work-study partners.

She noted that the work-study program provides students with valuable work experience and marketable skills while earning money toward their tuition.

“At Cristo Rey we equip students with the academic training, character development and real-world experience to advance their professional journey while enhancing the industries our students interact with and positively impact,” said Anamarie Moreiras, the school’s president.

Cristo Rey Miami High School has about 80 freshman students enrolled for its first year of operation. It is the 39th school in the Cristo Rey Network of Catholic schools in the country, which exclusively serve low-income students. The work-study partnership is the cornerstone of the Cristo Rey movement and the backbone of its sustainability.

The schools have a goal of 100% college enrollment and help to maximize the best-fit college for students.

Moreiras said the school is grateful for the support of the Miami community and thanked the founding group of work study partners. “The school would not exist without their support,” she said.

Through the corporate work study program, student’s earnings offset 50% of their tuition. The rest is covered by the Florida Tax Credit Scholarship, and a maximum 10% family tuition.

Cristo Rey High School Miami opened in a former evangelical church and day care center set on two acres of land along N.E. 119th Street and First Avenue in North Miami. A phased construction plan will include a large multipurpose renovated building, and a new four-level structure with classrooms and open courtyards. A Cristo Rey board member loaned the money to purchase the property for the school, which admits both boys and girls. 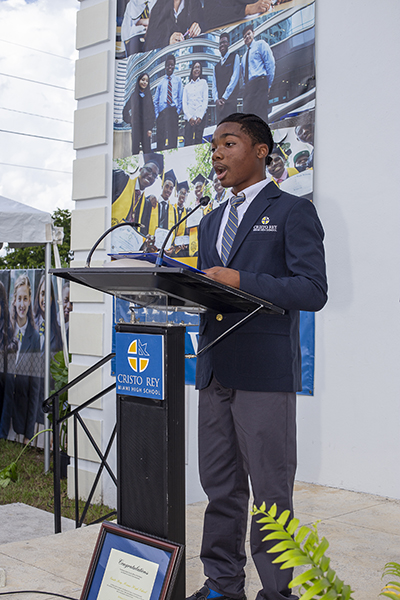 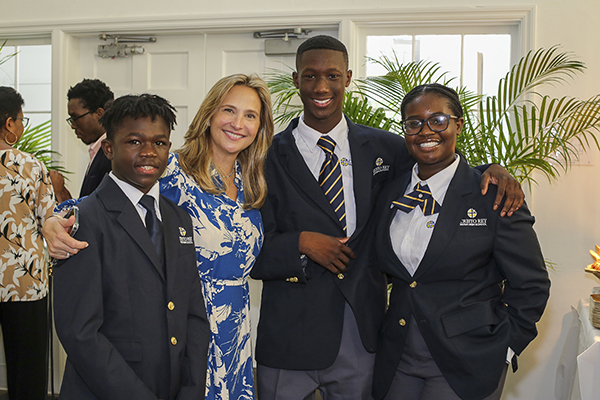 Posing for a photo at the Sept. 15, 2022 dedication of Cristo Rey High School in North Miami, from left: students Brandon Wells, 14, Major Doughty, 14, and Gabrielle Delucien, 14, with Amelie Ferro, vice president of Corporate Partnerships and Development.

Architect's drawing of future plans for Cristo Rey Miami High School, which was dedicated at a ribbon-cutting ceremony Sept. 15, 2022.

Several members of Cristo Rey Miami’s board of trustees were present at the ceremony, including founding board member David Lawrence. The former publisher of The Miami Herald has a passion for children’s education. He has served on the Governor’s Children and Youth Cabinet, chaired the Florida Partnership for School Readiness and led successful campaigns for The Children’s Trust.

“What a great day for Cristo Rey Miami,” Lawrence said in an address. “Seven years ago, my friend, Mike Fernandez, asked me if I would look into the possibility of Cristo Rey coming to Miami. I had never heard of Cristo Rey. I would do anything Mike and his wife asked of me. That led me to my friendship with [businessman] Rudy Cecchi.”

What followed for Lawrence was a trip to New York’s Cristo Rey High School in Harlem, where he was filled with enthusiasm. “I would love to help make this happen in Miami,” Lawrence said.

Cristo Rey High School Miami became a reality in the summer of 2022.

An anonymous benefactor donated an altar for celebrating Mass at the school, which the archbishop blessed during the Sept. 15, 2022 ceremony. The altar bears a plaque dedicating it to Lawrence’s wife of 59 years, Roberta. Their five children attended the event.

After blessing the altar, the archbishop said that the community rejoices with the opening of Cristo Rey Miami. “We can officially open this new school which God will look kindly on,” he said.

“It’s wonderful to have students who can come here and get a topnotch Catholic education,” he said.

Elizabeth Goettl, CEO of the Cristo Rey Network, said the high schools open the door of access to a quality Catholic prep school for any student. “Tuition is not a barrier to this college prep school,” she said.

“The opportunity to found a Cristo Rey School is priceless,” he said. “My personal experience at Cristo was phenomenal. I hold all my students to their highest potential and will help them reach it.”

Student Brandon Wells, 14, who took part in the mandatory Summer Success Institute, said he wants to be a lawyer. He is working at White and Case Law firm as part of the school’s work program.

“I like wearing a suit and being professional,” he said.

Student Alano Jean, 13, said he is looking toward a career in financial investment and works for a non-profit, Global Ties.

“The program at Cristo Rey is truly amazing,” he said.

This story has been corrected to reflect the fact that the altar at Cristo Rey Miami High School was donated by an anonymous donor, not David Lawrence, as originally stated in the story; another donor also loaned the school the money to purchase the property but did not donate the property; and the correct name of the school's president is Anamarie Moreiras, not just Ana. 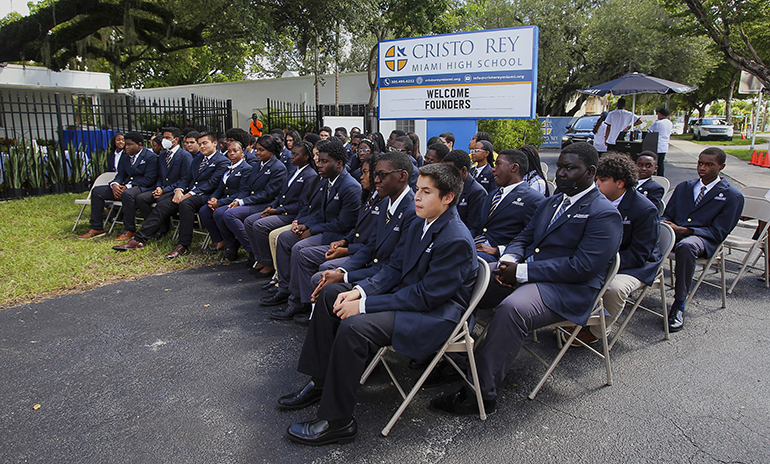