In Little Havana, bringing elderly together with joyful children 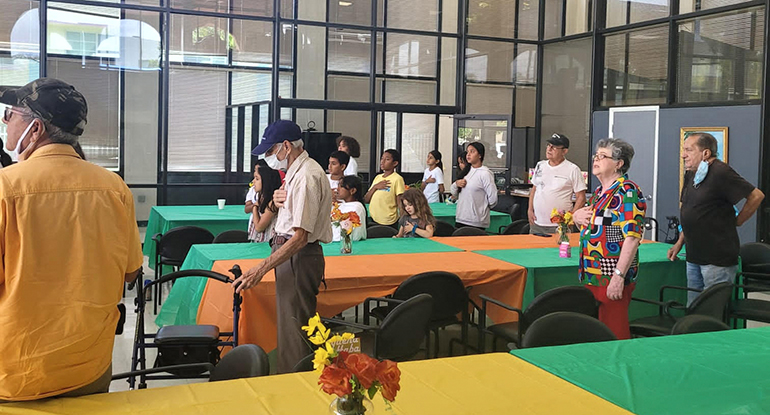 Seniors and youngsters sing the national anthem during a novel intergenerational space-sharing arrangement at a Catholic Charities congregate meal site brought youngsters together with senior citizens during a summer camp experience this year.

The result was such a win-win for the elderly and the toddlers that the agency plans to try it again, according to Peter Routsis-Arroyo, CEO of Catholic Charities Miami.

Routsis-Arroyo said that the Myers Senior Center in the Little Havana neighborhood of Miami-Dade County, which serves nutritious, hot meals to men and women 60 years of age and older, opened its adult day-care space to children from Centro Mater Head Start program nearby.

“The kids would spend a good part of the day with the seniors, and we are going to be restarting it,” Routsis-Arroyo said.

According to Catholic Charities, congregate meal programs serve eligible seniors, 60 and older, who live independently in their homes. The programs are a way to promote their independence, help them maintain good nutrition, reduce loneliness, make new friends, and increase self-esteem.

As the coronavirus pandemic waned in 2022, the senior centers were able to open again for in-person meal service and programming. The presence of young children sharing a meal and activities in the same facility brought a shared spark to both populations as they began to acclimate to each other’s presence.

The summer camp period began over 10 weeks beginning in June.

But not everyone was enamored initially with the mingling of generations, according to Estephany Deleg, a Catholic Charities’ team leader for elderly services in Miami-Dade. Some of the seniors were a little bit grumpy at the idea of children’s high level of energy, their singing and theatrical performances.

“Some at the beginning were kind of grouchy that they didn’t have their quiet space because for seniors it can be a little hard to change,” Deleg said.

“But later on we played music and the seniors were participating and one of them spoke for the group — a tough male — [who] was at first resistant but later thanked the children for bringing him joy,” said Deleg.

“That man had even stopped coming for two days at the beginning but then he came back so happy and so full of joy,” she added. “Our program is based on socialization to make their quality of life a little bit better, and the children were learning how to respect generational boundaries.”

“They shared lunch with the kids and ate together. But at the beginning it was the children on one side and the seniors on the other but eventually they mingled,” Deleg said.

The first thing Deleg said she will remember was seeing the kids singing the national anthem along with the seniors. Initially, the kids didn’t get it “but at the end of the summer camp they knew exactly what they were going to do and at the last day the children thanked us and the seniors for letting them share the space. They said they learned a lot and said they know they can be loud sometimes but that they can be welcoming.”

Routsis-Arroyo said the Little Havana congregate meal site became a hit with local community leaders who dropped in to see the intergenerational mingling. It also was a summer to celebrate the return to in-person gatherings following the long period of social isolation that many elderly endured over the last two and a half years.

“COVID showed the vulnerability of the elderly population — and even before that this program helps people deal with social isolation,” he said. “During COVID we had to go totally home-based meal delivery. When you get into respect for human dignity issues, our elderly population is often forgotten, and so this program is a bellwether program for Catholic Charities.”