SOUTHWEST RANCHES | Six years ago, St. Mark School in Southwest Ranches had little tech in its classrooms; not even in-house email accounts for their teachers.

But after undergoing a technological revolution, the school is being recognized this year by Apple for its innovation, leadership and educational excellence.

St. Mark is one of three archdiocesan schools to be named Apple Distinguished Schools in 2021. The others are St. Anthony and Cardinal Gibbons High, both in Fort Lauderdale. They join Immaculata-La Salle Highin Miami, and Archbishop Edward McCarthy High in Southwest Ranches, who earned the distinction a few years ago.

“Catholic education should be the leader in this,” said Teresita Wardlow, St. Mark's principal. 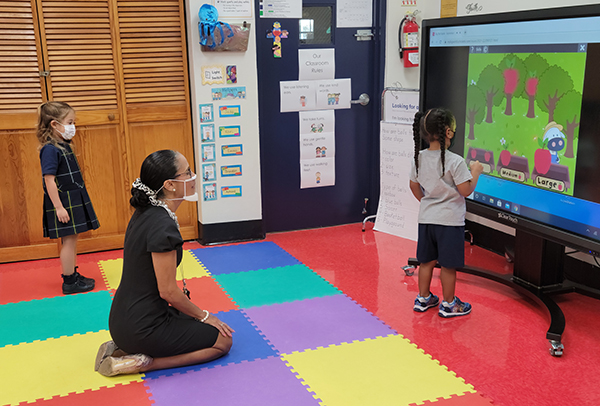 PreK3 students from St. Mark School show Principal Teresita Wardlow how they work and solve problems on a smart board in the classroom. St. Mark's has been named a 2021 Apple Distinguished School for their innovation, leadership and educational excellence.

“We get to develop skill sets, not only in technology, but in how students are talking, how they are collaborating, how they are making decisions,” she said. “We need to be led by what the child needs, and what our world needs. We can never deviate from that.”

Wardlow saw a need for change when she arrived at St. Mark seven years ago. A believer in looking ahead to prepare her students, she visited Archbishop McCarthy High next door to ask what resources her students needed to prepare for high school. As an Apple Distinguished School, Archbishop McCarthy had implemented extensive teacher training to integrate tech into their classrooms, as well as providing every student with an iPad that further enhanced the learning experience. 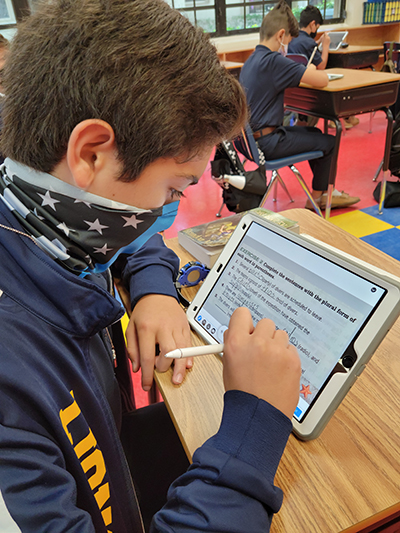 A middle school student from St. Mark School works on an English lesson from his iPad.

Wardlow decided that whether the technology be Apple, Google, laptops, or any other device, St. Mark was going to implement it.

With the aid and approval of the pastor, parish finance council and other supporters, the school invested in revamping the entire infrastructure, installing Wi-Fi access points, improving the network, and upgrading the technology in the classroom. Teachers and students were given iPads for use in the classrooms.

“We wanted to move things forward in a way that was true to 21st century learning,” said Eric Palacio, now assistant principal and formerly St. Mark’s IT director.

Palacio explained that “it was not only handing them a piece of technology, but also providing a level of support and professional development that was necessary for them to understand what it was that we were trying to achieve. We modeled for them what it meant to teach technology so that they could model it for their students.”

Teachers, however, were still nervous about using the devices.

“When we first started with the iPad, I was a little hesitant,” said Danielle McConnell, middle school language arts teacher, who has 19 years’ experience as an educator. “Even though I was a techy person, I was hesitant as to what it would do in the classroom. I am very into pen and paper, and I really love books.”

Over time, however, she saw how lessons and resources became more vibrant and accessible to students much faster than before, thanks to the iPads and various apps like Nearpod, Canvas, and others. 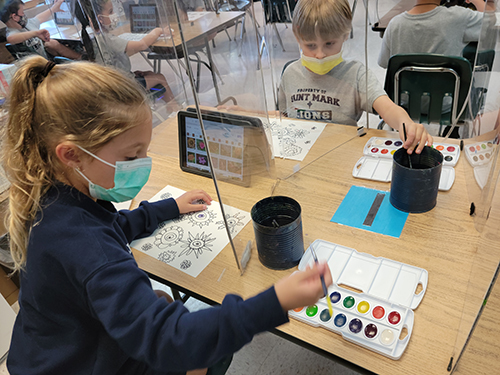 “They are actively learning and participating instead of just being bystanders and listening to a lecture,” said McConnell.

While the technology helped students remain engaged in the classroom, it also helped them at home during the school closures in 2020 caused by COVID-19. Via Canvas and Zoom, teachers taught lessons live and interacted with students.

“It was like I was in their homes with them, all learning together. It was amazing,” said McConnell.

Via Zoom and their iPads, middle school students also provided distance tutoring and socializing for students who had the need.

Wardlow pointed out that “the device is going to enhance learning. It’s not going to make you a better teacher or make them a better student. It’s a different format, and a different form of engagement,” she said. “The traditional teaching hasn’t gone away. The device did not replace the teacher. The teacher is still the key.”

Even students as young as PreK2 are using the technology, though it is balanced with the traditional manipulatives, dexterity and tangibility exercises required for their development. And pen and paper still exist, albeit in a hybrid form: using both the traditional tools and the styluses that enable writing on iPads and smartboards.

“Our students are native technology learners. For a student who has been here since PreK, by the time they accomplish everything they need to at the end of eighth grade year, they are going to be so well prepared for the digital arena that they are competing in that their success will be unlimited,” said Palacio.

Seventh grader Leia Cababan, who grew up with the tech revolution at St. Mark, is excited by the technology they now use in the classroom.

“I do like doing hands-on work, but on the iPad, it’s more efficient,” said Leia.

During a recent science class, her favorite subject, students used their iPads as virtual microscopes in the lab.

“You can do a lot of cool things. The iPad keeps me more engaged and prepares me more for what I have to do in the future,” said Leia, who dreams of one day becoming an aerospace engineer.

At St. Mark, the goal remains clear: to provide students with the best possible education as they follow their motto of “Education, Evangelization, and Innovation” — now reinforced with a little Apple.

PreK3 students from St. Mark School show Principal Teresita Wardlow how they work and solve problems on a smart board in the classroom.

St. Mark School Kindergarten teacher Fanny Huaman supervises students as they work on a theology lesson with the aid of iPads.

St. Mark School fourth grader Joscelyn Thomas works on a math problem with the aid of her iPad, textbook, pencil and stylus pen.

PreK3 students from St. Mark School work on various puzzles and exercise available to them on their iPads.

A middle school student from St. Mark School works on an English lesson from his iPad.