Ceremony for jubilarians, set for end of March, was canceled due to pandemic

MIAMI | The annual celebration for men and women religious who are marking 25, 50 or 60 years of profession was supposed to take place March 28, 2020. The COVID-19 pandemic upended those plans. But their milestone anniversaries deserve recognition, so here are brief biographies of this year's religious jubilarians. 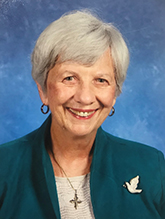 Sister Helene is a native of Detroit, Michigan. She attended Edwin Denby High School and began her studies in music education at Wayne State University before entering the Adrian Dominican Congregation in Michigan in 1960. She has taught school in Ohio, New York, Miami Shores (St. Rose of Lima), and Puerto Rico. The love of people, music and pastoral work has made liturgical music the ideal ministry for her. She has been director of music at Visitation Parish in North Miami, St. Patrick in Miami Beach, and presently at Our Lady of the Lakes in Miami Lakes. 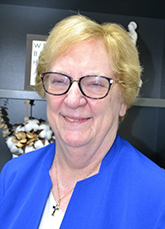 Born in Garrison, County Fermanagh, Northern Ireland, Sister Anastasia is the fifth of seven children. She entered the Sisters of Mercy in Enniskillen, Northern Ireland, in 1967 and made her first profession in 1970. In 1974, she obtained a bachelor's degree in education from St. Mary’s-Queen's University in Belfast. Beginning in 1976, she spent 20 years teaching, both at Immaculate Conception School in Hialeah and St. Jude School in Boca Raton. She also served as a novice directress, local and regional leader of the Sisters of Mercy. After obtaining a master's in social work from Barry University in 1996, she worked for 23 years at the Barry Counseling Center, serving as counselor, director and associate director until her retirement from fulltime ministry June 2019. Until the COVID-19 pandemic hit, she served as co-teacher in the Rite of Christian Initiation of Adults and part-time counselor at St. Bernadette School in Hollywood. 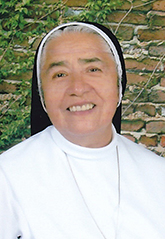 Sister Enith, the oldest of eight children, was born in Cariamanga, a town in the province of Loja, Ecuador. She studied in schools operated by the Salesians, the Dominicans of the Immaculate Conception and the Jesuits, and graduated from the Pontificia Universidad Católica in Quito, Ecuador. While embarking on studies there in biology and education, she met Dominican sisters who were "young and happy," teaching the word of God and helping the poor and needy in a home for the aged. "Their testimony impacted me," she recalled. On Sept. 8, 1966, "I dreamt that Our Lady of the Immaculate Conception invited me to leave everything behind and follow Jesus... I thought it over, prayed and allowed myself to be seduced by him."

She entered the Dominicans of the Immaculate Conception in Quito in January 1967 and made her first profession in 1970. Since then she has taught in schools in Ecuador and a university in Mexico. She founded a house of formation in Puebla, Mexico, and a vocational youth ministry. From August 1997 to June 2005 she served as director of religious education at St. Cecilia Parish in Hialeah, where she remains active in the Neocatechumenal community. "I currently continue to serve God in my needy brothers and sisters, both spiritually and materially in various groups and places." 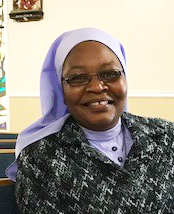 Sister Mary Angela considers herself "a missionary and a pioneer." Born in Mbaise, Biafra Nation, Nigeria, she entered the Daughters of Mary, Mother of Mercy in December 1992 and made her first profession in September 1995. She has worked as a schoolteacher, in parishes and in a hospital, and served as a missionary in Cameroon and Italy. She also served as superior, director of a social center, and assistant director of a retirement home for the elderly, as well as director of a vocations group. Since December 2018 she has been working part-time at St. Monica Parish in Miami Gardens while studying at St. Thomas University, where she is majoring in religious studies and minoring in psychology. 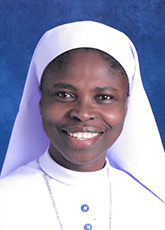 Sister Mary Chibunmam was born in Isiekenesi, Imo State, Nigeria and said her "childhood desire to join the convent" was granted when she was 21. She entered the Daughters of Mary, Mother of Mercy in March 1991 and made her first profession in September 1995. Her ministry includes caring for the poor and needy and serving as a catechist and extraordinary minister of holy Communion at St. Monica Parish in Miami Gardens. She also works as a wellness nurse and has a master's degree in counseling studies from St. Thomas University in Miami Gardens. "My hope is to work as a professional counselor for the youth," she said. 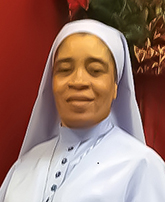 Sister Nina is the second of seven children, a native of the Owerri Archdiocese in Nigeria. She entered the Daughters of Mary, Mother of Mercy in December 1992 and made her first profession in September 1995. She has ministered in schools, parishes and hospitals. In the Archdiocese of Miami, she works as a certified nursing assistant at St. Anne's Nursing and Rehabilitation Center. "All these years I have been enjoying my religious vocation and apostolate," she said.

Articles(32)
Events(1)
Our Lady of the Lakes Church