Jesus writes on the ground, seemingly ignoring the accuser of an adulteress. According to the Bible, he then stood and challenged them to throw stones if they themselves were sinless. Instead of doing so, they slunk away.

In "Don't Look for the Living Among the Dead," Jesus watches three women who have just discovered his body is no longer in the tomb.

A menorah, a Star of David, and the flag of Israel take center stage in Robert Swedroe's Heritage.

Jesus huddles with followers in "More Will Be Revealed" by Cesar Garcia.

Robert Swedroe offers different views of the city in this art, Yerushalum. The oval-shaped scene near the center is taken from a mosaic in the floor of St. George's Church in Jordan.

Robert Swedroe gives homage to the K'Tuvim, the part of the Bible containing the poetic books of Job, the Psalms and the Proverbs.

Jesus seems to turn into spirit during this Ascension painting by Cesar Garcia.

MIAMI GARDENS | Two artists — one Catholic, one Jewish — unite in a new art exhibit on spirituality and heritage at St. Thomas University.

"Conversation With Christ," by Cesar Garcia, paints an intense, earthy Jesus who teaches, suffers and resurrects.

"Symbolism," by Robert Swedroe, presents dazzling, colorful collages on the faith and heritage of the Jewish people.

Isabel Medina, curator for the exhibit, said the show was something of a dream come true.

"These two are very dear to me," said Medina, who opened the show Sept. 29, 2020. "Cesar and Robert are opposite artists and very gifted. It's important to learn the faith of others, especially for Catholic-Jewish relations. The more we learn about each other, the better we'll get through 2020." 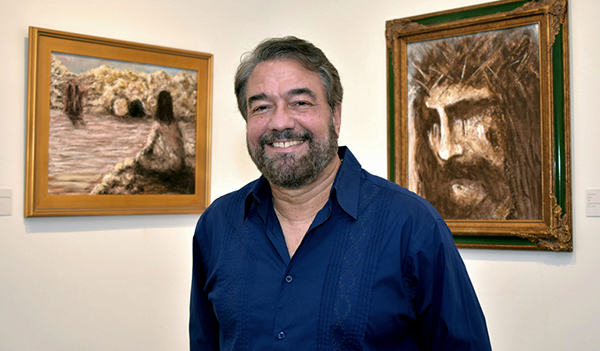 Cesar Garcia says that painting his Conversation with Christ series helped him through his own spiritual crisis. 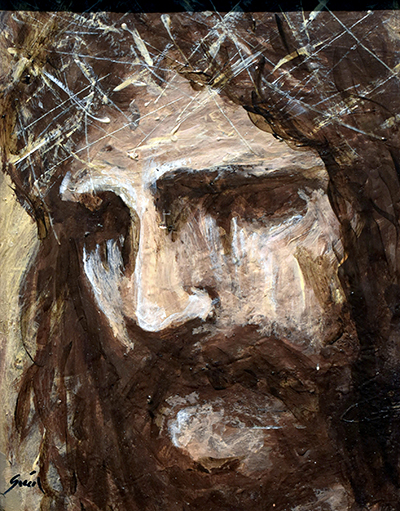 In Garcia's 19 canvases, the artist paints Jesus over and over. His Jesus sits and teaches followers, or kneels and washes their feet. They all look literally rough-hewn, formed by the artist's style of dabbing bits of acrylic paint with a spatula.

The pictures are a study in somber shadows and sepias, relieved only by a few other subdued colors. The Christ figure is dark-skinned, dark-haired, dark-bearded, with hooded eyes and a solemn manner.

Several pictures show close-ups, with Jesus' face downcast and thorn-crowned, streaked either with tears or blood. In some, the canvas bears thin cuts, almost as if scratched from the other side by the thorns.

Among the few exceptions to the mood is "Ascension," with Jesus clasping hands prayerfully as he rises. His robes merge with the clouds, seemingly turning to spirit.

CHRIST IN THE CLOUDS

The Miami-based artist painted the pictures in the early 1990s, during a crisis of substance abuse and questions on the meaning of life. As part of his search, he began painting picture after picture of Christ, drawn partly from photos of clouds.

The exercise not only yielded the paintings but helped him defeat his addiction. "I looked everywhere for a solution, only to find it Ã¢â¬Â¦ within myself. My creative exploration allowed me to rediscover my faith in God."

What did he learn? "Jesus is our brother, who showed us the way," Garcia replied. "He proved that we are not a body but a soul. The body will die, but you won't; you'll go someplace else.

"That was my spiritual awakening," he said. "It's difficult to put into words. But when you know that, you realize that you're saved."

His art is largely self-taught, he said. Born in Cuba in 1961, he first learned of his own talent in the studio of an artistic uncle there. He came to the United States as a child, in 1969.

Although born in the Church, he doesn't regard himself as a practicing Catholic, "but I follow their spiritual teachings." His two daughters attended St. Timothy Parish School in Miami, then Our Lady of Lourdes Academy, also in Miami.

Garcia showed some of his later artworks in 2018 at STU, to Medina's admiration. He told her of his Christ-centered art, which he had shown at the National Museum of Catholic Art and History in New York. She jumped at the chance to show them locally.

"He portrays Jesus differently — less in a suffering way, more spiritual, and in relationships," Medina said. "Like seeing different photographs."

Swedroe, the other artist in the exhibit, is poles apart from Garcia's approach. Swedroe majors not in paint but in collages: assembling pictures from items including beads, coins, sequins, fabric, buttons, feathers, magazine images and printed texts in Hebrew, secured with a coat of resin. He also uses colors, either mixed or predominant, to set a theme for each picture. 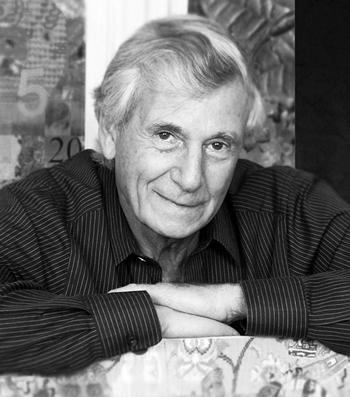 Robert Swedroe holds a degree in architecture, but he has also gained recognition for his Jewish-themed collages. 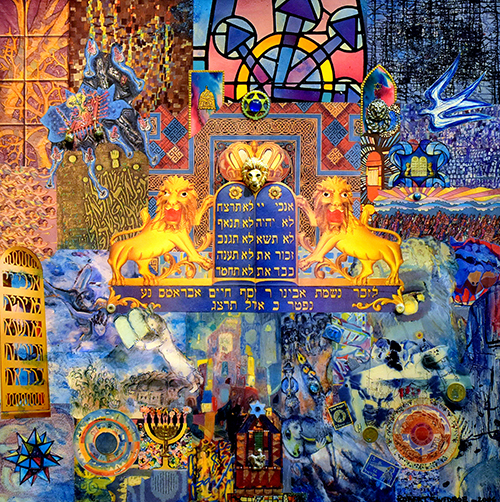 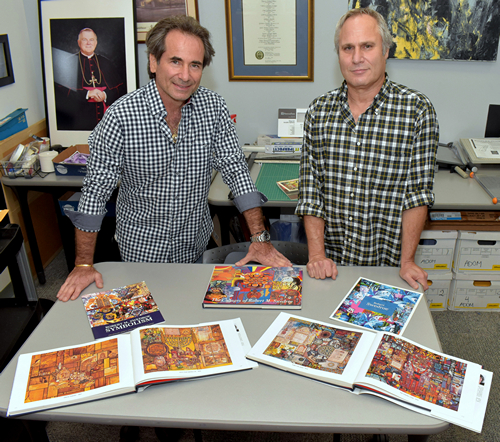 "He has an immense image bank," said Freddy Sall, a friend and art historian. "He's always drawing on it while putting his works together."

Swedrow's eight pieces at the STU exhibit are rich in symbolic words and concepts.  Among them:

"Heritage" shows the seven-branched candelabrum known as a menorah growing from a Star of David and the flag of Israel.

"Kohein's Conundrum" deals with the dilemma of reaching toward the spiritual while coping with mundane, everyday life.

"K'Tuvim" blends prayers from the Torah with menorahs and intricate Mideastern designs. The picture's title is the name of the poetic books of the Bible: Job, Psalms and Proverbs.

Swedroe even made two pictures of Jerusalem. One is clustered with Jewish images like the Great Menorah, the Western Wall and a kiddush cup for the Sabbath. The other picture of Jerusalem joins various images, reflecting the fact that Jews, Christians and Muslims have lived together there for centuries.

"This work is religious, not political," Sall stressed. "It's meant to transcend politics."

Many of Swedroe's pictures are so packed with symbols, their overall meaning can be hard to tease out. That's the way he likes it, according to son Marc, who attended the opening for his father, who was ill.

"It's all up to interpretation," Marc said. "Yes, he put labels on his work. But people could gravitate toward it in many ways."

Sall agreed. "Judaism is alive and thriving. And it's connected with a venerable lineage."

Swedroe, who lives on the Isle of Biscaya in Miami-Dade, didn't major in art in college — he holds a master's degree in architecture from Yale. But the profession spawned an interest in three-dimensional art that grew into his collages.

He took a 33-year sabbatical as his architecture business ramped up, then returned to his art in 2007 as his business slowed. This is his second show at STU; the first was in 2012.

Earlier this year, Medina saw some of Swedroe's pieces at an easel store. She admired how he "unites every piece, like a narration." She invited him back to STU.

The exhibit drew praise from STU president David Armstrong, who dropped in and snapped photos with his cellphone.

"I love the juxtaposition of art from Catholic and Jewish faiths," Armstrong said. "To have a powerful artistic rendering of religious symbols is very moving. This is an example of what we believe."

Armstrong said the theme of the exhibit blended well with STU's embryonic Institute for Interfaith Leadership, which he launched in November 2019.

Wednesday, 9 Jun 2021
Abuse of the elderly: another pandemic