The vocation of fatherhood 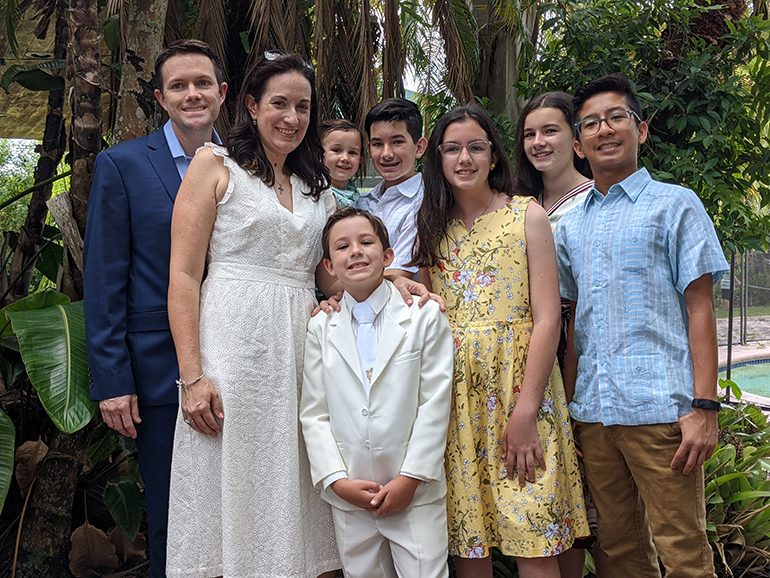 Richard Lopez gathers his family after Mass May 15, 2021 at the Church of the Little Flower in Coral Gables where his son, Nicholas, 8, received the sacrament of holy Communion. Shown standing by him is his wife Angelique and the rest of their children.

MIAMI | Richard Lopez knew at a young age that he was called to the vocation of fatherhood. But he never expected the twists and turns and extraordinary surprises that would be part of his journey.

“I always wanted to marry, and I felt called to be a father,” said Lopez of Kendall, a software engineer and parishioner at the Church of the Little Flower in Coral Gables. “I wasn’t expecting things to turn out the way they did.”

Lopez met “the one” at a young adult ministry event at St. Brendan Parish in Miami. Her name was Angelique Ruhi. Richard and Angelique talked, and enjoyed time together. Dating came next. Time passed. Richard proposed, and wedding bells rang out in 2003.

Life was good. The newlyweds began making a home. Both Angelique and Richard wanted to start a family. “I could tell my husband had a vocation to fatherhood very early in our relationship,” said Angelique.

Time passed. A year went by, then another. The couple did not conceive. “We faced a period of infertility,” said Angelique.

Naturally, Richard and Angelique were sad. They visited doctors, did research and beefed up their conversations with God, knowing that bringing life into the world was in his hands.

“The doctors saw nothing wrong,” said Richard. “After a few years, we felt called to adopt.”

The couple’s next challenge began August 2006: the adoption process. They found an agency. Then came the paperwork, background checks and interviews.

At the end of September, unexpected news arrived. “My wife became pregnant,” said Richard. God had answered their prayers in a big way.

“A year and a half later, we had our twins,” said Richard. Madeleine and Anabella arrived, and in 2013, Nicholas was born. Julia made her surprise debut five years laterrn.

“God surprised us in big ways,” said Angelique. “It's been a blessing to see my husband lead by example and be an incredible father to our children.”

The Lopez children make good grades in school. They are active in the parish with youth ministry and volunteer as altar servers and lectors.

“I have good kids,” said Richard, a proud father of his children, ranging in ages 14 to 3. “It has been fun watching them grow up. I have experienced a great deal of joy being able to help them in their formation. To see them go from depending on us to becoming more mature is amazing. It was like a snap of a finger.”

Richard confesses that fatherhood is not easy, and at times very challenging. “I have always tried to be an example. It is important. We attend Mass together as a family. We go to reconciliation together on a monthly basis. When a kid sees a mom and dad praying and asking for God’s forgiveness, it serves as a good example.”

Ricardo Franco of Plantation celebrated his oldest son’s graduation from St. Thomas Aquinas High School in Fort Lauderdale May 15, 2021. Giovani graduated with top honors and received a Bright Futures Scholarship. Following in his father’s footsteps, he will study engineering at the University of Florida this fall. 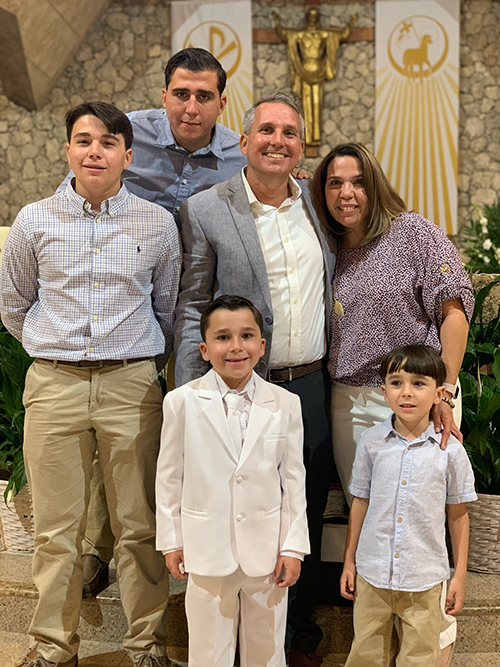 Ricardo Franco joins his family at the altar after Mass at St. David Church in Davie May 15, 2021. He is shown with his wife Olga at his side. His son Gianluca, 8, a student at St. David School, is shown in white. He received his first holy Communion during the Mass.

Franco, an electrical engineer and parishioner at St. Gregory in Plantation, married Olga 21 years ago. They have four children. Giovani, 18, is followed by Gianmarco, 15, a sophomore at St. Thomas Aquinas. Gianluca is 8 and a student at St. Davidin Davie. The baby, Gianmatteo, is 5.

“The joy of fatherhood is seeing your children grow up and succeed in life,” Franco said, confessing that fatherhood is not an easy vocation. “Being a father is harder than I ever expected. My father was a good example, but I saw the fun side of things.”

He explained that being a good father and family life is all about the birthdays, holidays, vacations and celebrations. But parenting demands sacrifice, hard work, dedication, patience and understanding.

“You have to have faith in God. You have to be a good example and provide your children with a good foundation to help them when they go out into the world. There will be times when they will be challenged.”

The Francos are active in the parish. The family attends Mass together every Sunday and the children serve as altar servers and ushers.

“Raising children is not easy,” said Ricardo. “You pray about it. You have faith that you are doing your best.”

Deacon Sergio Rodicio, an accountant who works as business operations manager at St. Mary Cathedral in Miami, was first called to the vocation of marriage and fatherhood. Then, more than a decade later, he heard God calling him to the diaconate. 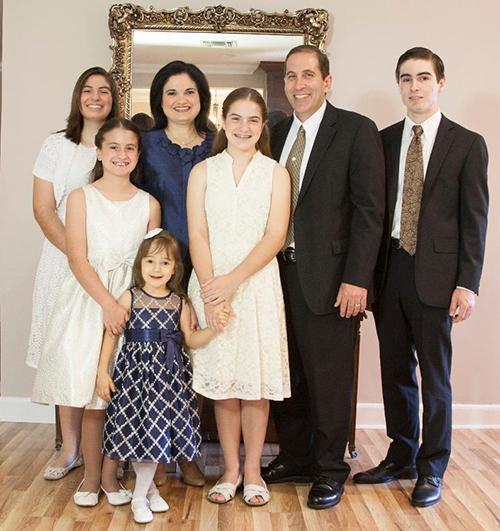 Deacon Sergio Rodicio gathers with his wife, Lenore, and children ages 21 to 7. He talked to the Florida Catholic about the joys and the challenges of the vocation of fatherhood.

He was ordained a permanent deacon in 2017 and is assigned to St. Mary. He and Lenore, his bride of 22 years, have five children ages 21 to 7.

The Rodicios met at a youth group event at St. Michael, where they eventually married. Their friendship blossomed over time. They began dating. After high school, he entered Florida International University in Miami to earn an accounting degree. Lenore went to Baton Rouge to study chemistry at Louisiana State University.

They continued to have a long-distance relationship. At some point a marriage proposal came, and after a long engagement and their college graduations, the couple tied the knot.

The newlyweds bought a little house across the street from Deacon Rodicio’s family. Married life began with a good start and with support and love from family members.

“Watching them grow up has been a joy,” said Deacon Rodicio. “I am proud of them.”

God, Church and Catholic education have been key components in the upbringing of the Rodicio children.

“They have always known that faith is the most important thing,” said Deacon Rodicio, who has been a witness of living and loving the faith by serving the Lord as a clergy while following the call of fatherhood and marriage and managing to keep it all in balance.

As part of their busy life, the Rodicio family share meals together. Everyone pitches in and helps with chores. The family prays together, shares fun times and enjoys being together.

An amazing thing about this family is that there is only one cellphone among the children. “The oldest in high school gets the cellphone,” said Deacon Rodicio about his technique of keeping everyone better connected and talking.

The other rule in the Rodicio household that might be key to his tight bond with his children is the family policy of honesty. “I have always expressed to them that they have to be honest. Honesty is primary,” said Deacon Rodicio. His truthfulness rule assures the children that they have support to always share their experiences and secrets that they don’t share with anyone else.

Deacon Rodicio said he is thankful for his own father, who was a wonderful role model with deep faith and love for God. “I had a wonderful father. Some of us are blessed. I am a father much like my father was a father,” said Deacon Rodicio, who is continuing on his fatherhood journey as his oldest son completes college and begins discerning his own vocation in life.

This article was written for the Florida Catholic Media’s monthly Dose of Faith newsletter. You can subscribe here.

Corrected June 17, 2021: Deacon Rodicio and his wife met and married at their home parish of St. Michael in Miami, although he is assigned and works at St. Mary Cathedral.

Fr. Marino - 06/16/2021 12:32 PM
God bless our fathers! Deacon Rodicio is actually a CPA and though I wish that The Cathedral could claim him as our own “vocation”, he and Lenore are from St. Michael’s parish where they met and married.