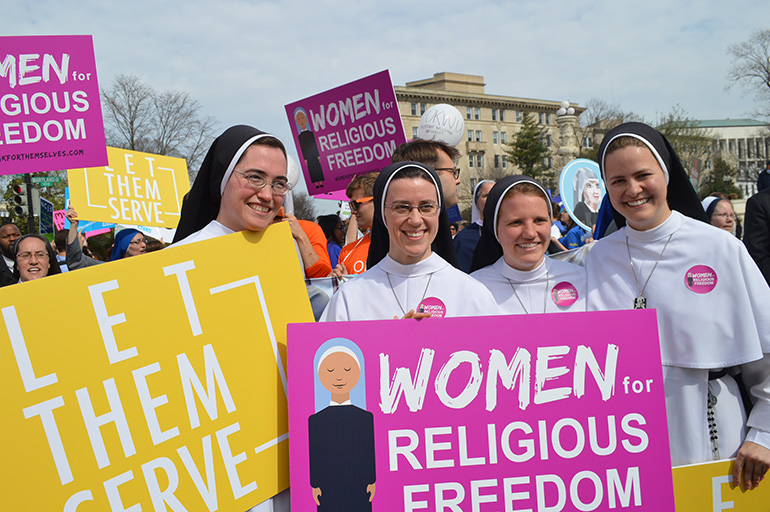 Religious sisters show their support for the Little Sisters of the Poor outside the Supreme Court where oral arguments were heard on March 23, 2016 in the Zubik v. Burwell case against the HHS Mandate. The case decided July 8, 2020, was the latest in a round of lawsuits over the mandate.

WASHINGTON D.C. | The Little Sisters of the Poor had a victory at the Supreme Court on Wednesday, nine years into the religious order’s bouts of litigation over the Obama-era “contraception mandate” which obliged employers to provide for contraceptive coverage for employees through their health care plans.

“For over 150 years, the Little Sisters have engaged in faithful service and sacrifice, motivated by a religious calling to surrender all for the sake of their brother,” wrote Justice Clarence Thomas for the majority. “But for the past seven years, they — like many other religious objectors who have participated in the litigation and rulemakings leading up to today’s decision — have had to fight for the ability to continue in their noble work without violating their sincerely held religious beliefs.”

In a 7-2 decision released July 8, 2020, the Court’s majority sided with the sisters in the latest round of lawsuits against them over the mandate, this time brought by the states of Pennsylvania and California. The states argued that the exemption crafted by the Trump administration for organizations with religious or moral objections to the mandate shifted the cost of providing contraceptive coverage to the states and was procedurally flawed. 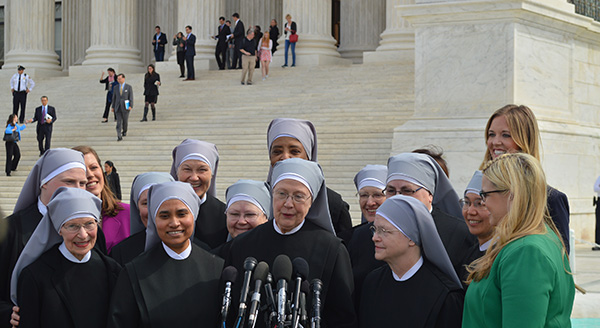 Little Sisters of teh Poor speak outside the Supreme Court after oral arguments were heard on March 23, 2016 in the Zubik v. Burwell case against the HHS Mandate. The case decided July 8, 2020, was the latest in a round of lawsuits over the mandate.

“We hold today that the Departments had the statutory authority to craft that exemption, as well as the contemporaneously issued moral exemption,” the majority found. “We further hold that the rules promulgating these exemptions are free from procedural defects.”

Archbishop Thomas G. Wenski of Miami, chairman of the U.S. Conference of Catholic Bishops’ Committee for Religious Liberty, and Archbishop Joseph F. Naumann of Kansas City in Kansas, chairman of the Committee on Pro-Life Activities, issued a statement addressing the case:

“This is a saga that did not need to occur. Contraception is not health care, and the government should never have mandated that employers provide it in the first place. Yet even after it had, there were multiple opportunities for government officials to do the right thing and exempt conscientious objectors. Time after time, administrators and attorneys refused to respect the rights of the Little Sisters of the Poor, and the Catholic faith they exemplify, to operate in accordance with the truth about sex and the human person. Even after the federal government expanded religious exemptions to the HHS contraceptive mandate, Pennsylvania and other states chose to continue this attack on conscience.

“The Little Sisters of the Poor is an international congregation that is committed to building a culture of life. They care for the elderly poor. They uphold human dignity. They follow the teachings of Jesus Christ and his Church. The government has no right to force a religious order to cooperate with evil. We welcome the Supreme Court’s decision. We hope it brings a close to this episode of government discrimination against people of faith. Yet, considering the efforts we have seen to force compliance with this mandate, we must continue to be vigilant for religious freedom.”

The near decade-long court battle of the Little Sisters of the Poor dates back to 2011, when the Obama administration required employers to provide cost-free coverage for contraceptives, sterilizations, and “emergency birth control” in employee health plans under the Affordable Care Act (ACA).

Although the Obama administration granted an “accommodation” to the Little Sisters and other objecting religious non-profits, the sisters sued the government in 2013 saying the process still required them to essentially give a “permission slip” for contraceptive coverage to be delivered through their health plans.

In 2016, a divided Supreme Court sent the case back to the lower courts and instructed both the administration and the non-profits to reach a compromise where cost-free contraceptive coverage could still be offered to employees while respecting the moral objections of religious groups.

In 2017, the Trump administration granted a religious and moral exemption to the mandate for the sisters and other objecting groups, but then the states of Pennsylvania and California filed lawsuits. The Supreme Court took up their case against the states in January, hearing arguments by phone in April following the coronavirus pandemic.