MIAMI | Archbishop Thomas Wenski has called for a "hate crime" investigation after a statue of Jesus was found decapitated on the grounds of Good Shepherd Church in Kendall.

Mary Ross Agosta, archdiocesan director of communications, issued this statement in response to media inquiries after the statue was discovered the morning of July 15, 2020. 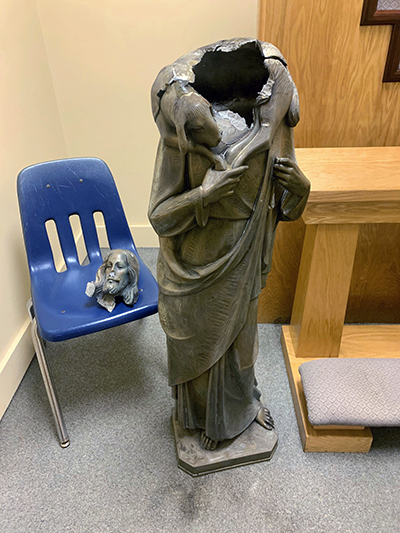 This statue of Christ as the Good Shepherd was decapitated sometime between the evening of July 14 and the morning of July 15, 2020, outside Good Shepherd Church in Kendall. Archbishop Thomas Wenski has asked that the incident be investigated as a hate crime.

“Late Tuesday night, July 14th/early Wednesday morning, July 15th, a statue of Jesus Christ was decapitated. The statue of the Good Shepherd was located in a garden outside of its namesake parish, Good Shepherd Catholic Church, located in southwest Miami-Dade County. This statue was located not only on private property but on sacred property. Archbishop Thomas Wenski is requesting that police investigate this incident as a hate crime.”

Surveillance cameras from the parish are being examined to see if they caught the vandalism on tape. The area around the statute’s former pedestal now features a sign put up by parishioners reading “GOD wins over evil.”

The incident is one of several similar ones at other Catholic churches in the U.S. during the past several weeks.

In recent weeks, Catholic religious statues in California, Missouri, and other places have been toppled or vandalized by protestors including several of St. Junipero Serra. In most cases, the vandals and perpetrators have not been identified.

A suspect has been apprehended and charged after a July 11, 2020 incident at a church in Ocala, in the Diocese of Orlando. A man crashed his van through the doors of Queen of Peace Parish and set the interior of the church ablaze before driving off. No injuries were reported.

"Luckily, Mass hadn’t begun yet and the pews weren’t packed. There was about five individuals in there, saying their rosaries before Mass,” said the church's pastor, Father Patrick O'Doherty, who witnessed the incident.

The suspect, Anthony Steven Shields, 24, was apprehended by police after a chase. Church video shows him pouring gasoline into the foyer area of the church and igniting the blaze by hurling a lit shoe onto the gasoline.

Shields has been charged with a slew of felony charges including attempted second-degree murder, arson to a structure, and felony fleeing or attempting to elude, and several more.

Catholic News Agency and the Florida Catholic's Orlando edition contributed to this report.