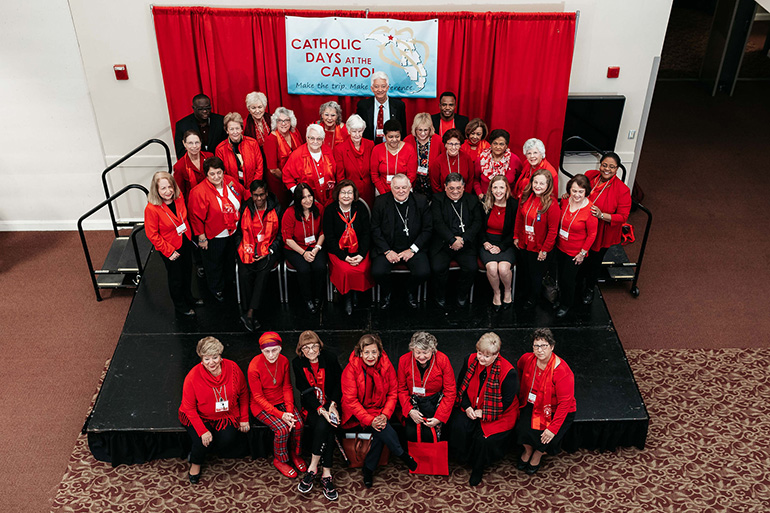 The Archdiocese of Miami delegation to Catholic Days at the Capitol, composed of members of the Miami Archdiocesan Council of Catholic Women as well as representatives of the Respect Life Office, pose for a photo with Archbishop Thomas Wenski and Auxiliary Bishop Enrique Delgado, Jan. 29, 2020.

Orchestrated by the Florida Conference of Catholic Bishops, Catholic Days at the Capitol, Jan. 28-29, brought hundreds of pro-life advocates representing every Florida diocese. Participants — who included members of the Councils of Catholic Women, clergy, religious, seminarians, Knights of Columbus, laity and teens — filled the massive auditorium, sitting at their designated tables, listening to lectures from priests, bishops, and members of Catholic Charities.

The gathering is part of an annual religious excursion, with the second day dedicated to having participants blitz the Capitol complex to peacefully talk with lawmakers responsible for defending or opposing several bills that could threaten the futures of millions in Florida. 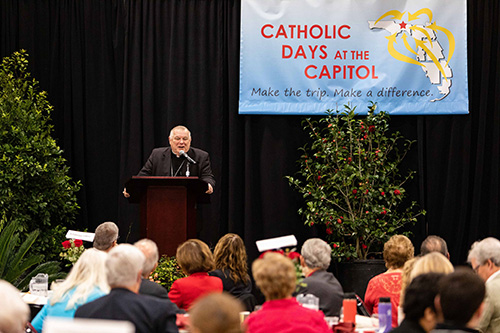 Archbishop Thomas Wenski speaks to participants at the 2020 Catholic Days at the Capitol legislative breakfast, where the bishops outlined the Church's priorities for laws that protect human life and enhance human dignity.

Making their voices heard on Florida legislation is a task these devout advocates relish. They have been performing this ritual for years with hopes that those in charge of introducing and executing legal orders in the Sunshine State embrace a more Christian value system that encourages sympathy and empathy over its citizens.

Michele Taylor, associate director for communications of the Florida Conference of Catholic Bishops, helped organize the event that brings Catholics together to cause positive political change.

“Catholic Days activities allow elected officials to hear directly from their Catholic constituents and for the members of our faith community to demonstrate their support for public policies that protect and promote the lives and dignity of some of Florida’s most vulnerable populations,” she said.

Before meeting with their representatives, the conference held with a legislative briefing with participants that outlined three specific topics of discussion with legislators.

The first topic involved abortion, specifically parental consent for an underage girl to obtain an abortion. As of now, the U.S. Supreme Court has upheld laws requiring parental consent before a minor is allowed an abortion. But there are also judicial bypasses, such as if there is parental abuse or incest, which allow the minor to petition the court for a waiver allowing an abortion.

The issue many have with the current status in Florida is that only a parental notification on the part of the clinic is required — not actual consent by the parent.

“Once a minor is pregnant, her life is forever changed,” said Ingrid Delgado, the conference’s associate director for social concerns/respect life. “Florida law currently requires parental notification prior to a minor’s abortion, but that one might not be sufficiently strong to ensure that a parent is actually notified. The abortion facility only has to mail the notice but not confirm its receipt.”

Delgado and other anti-abortion advocates hope to see the passage of SB 404 and HB 265, a bill that would require official consent by a parent before a minor has an abortion. The bills also include a judicial bypass for certain circumstances.

The good news is that the Florida Senate passed the bill Feb. 9, leaving the measure up for a vote in the Florida House, which is almost certain to pass it. Gov. Ron DeSantis used part of his State of the State address last month to urge lawmakers to send it to his desk.

“I am glad that my students got to see and hear this so they can see how they can make a difference and effect change on some of the issues the Catholics are involved in,” he said. “I just came from the March for Life, so obviously I am very pro-life Ã¢â¬Â¦ It’s all about life,” he said. “Whether it is in the womb or at the end of life. We are trying to protect it always.” 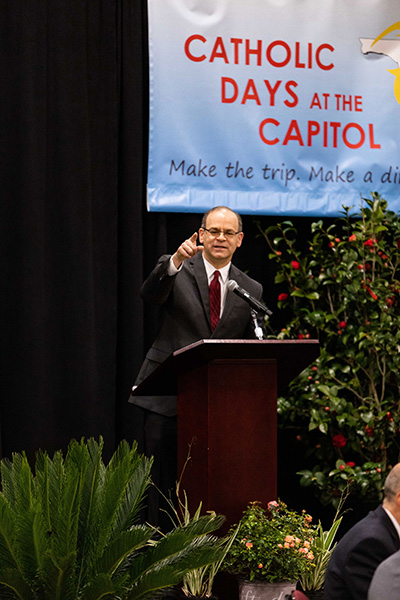 Michael B. Sheedy, executive director of the Florida Conference of Catholic Bishops, speaks to participants at the 2020 Catholic Days at the Capitol legislative breakfast, where he outlined Church's priorities for laws that protect human life and enhance human dignity.

“I cannot believe that you can perform an abortion without parental consent, but you can’t give them an aspirin,” she said Bonnie Jones, who attended the event and the Red Mass later that evening. “It is just illogical.”

Overall, Florida has seen a dramatic drop in abortions during the last decade. According to the Agency for Healthcare Administration, in 2010, Florida abortions hit 79,843. In 2018, that amount decreased to 70,239. As of December 2019, abortions plummeted further to 62,731.

Whereas the aforementioned bill has support from both the Senate and House, the assisted suicide bill only exists in the Senate, for now. Were it passed, SB 1800 would support any Floridian’s ability to legally purchase drugs for the purpose of ending one’s own life.

Several states, including California and Oregon, have been practicing assisted suicide for years. Ken Kniepmann, the Florida bishops’ conference associate for health, said those advocates are setting their sights on Florida. Supporters of assisted suicide claim it will allow those suffering from a terminal illness a “death with dignity,” and without burdening their families with thousands of dollars in medical bills. Catholics oppose those arguments.

“It’s a felony to help someone commit suicide in the state of Florida,” Kniepmann said during a question and answer session with Catholic Days participants. “The so-called ‘Death with Dignity’ laws have really been promoted by well-funded advocacy groups. They influence medical professional associations. They reframe the public perception, and they lobby legislators.”

While meeting with members of his district, which includes a portion of the Diocese of Venice, Sen. Bill Galvano, president of the Florida Senate, assured his constituents that “I do not support assisted suicide,” and “that bill isn’t going anywhere. It will not pass the Senate.”

But Kniepmann said the assisted suicide movement won’t be dismissed that easily. “These are tough battles,” he said. “We need to recognize the proponents of this bill have invested an enormous amount of time and energy just to get this bill proposed in this chamber.”

Keeping with the preservation of all human life, participants at Capitol Days also advocated for repealing capital punishment, urging support of SB 938 and HB 6045.

Pope Francis, like Pope John Paul II before him, has stated that capital punishment is unnecessary and inadmissible to ensure the safety of society. Also, more and more death row inmates are now being exonerated through newly available DNA evidence.

However, the bills have a difficult road ahead.

In 2019, Florida was one of four states that both sentenced a convict to death row and executed an inmate. Also, Florida ranks second for having the most death row inmates yet has exonerated more inmates from death row than any other state.

“Florida is a national outlier when it comes to the death penalty,” Delgado said.

A majority of Americans are beginning to see capital punishment as an outdated policy to deter crime. A Gallup poll from 2019 found that 60% of Americans believe life imprisonment is a better option than a death sentence. Supporters of capital punishment typically claim the death of the inmate provides closure to the victims’ family. However, many times, families of murder victims state that the culprit’s death brings no added peace or satisfaction.

Chevere referenced his home of Puerto Rico to make a point. “Seventy percent of people in Puerto Rico are Catholic, so there is a very firm faith-based belief that you have to respect life until the moment of death, even for people who have committed great crimes.”

Jones brought up the possibility that a criminal on death row might be innocent. “In light of all the people they have let out of jails that were wrongly convicted, it is a scary proposition to have a death penalty.”

Sen. Galvano wasn’t as free with his opinion about the upcoming bills that would support a repeal of capital punishment in his state. “I think you just keep the discussion going more and more as we get better DNA evidence.”

A view of the breakfast where representatives of the Florida Conference of Catholic Bishops outlined the Church's priorities for the legislative session. Afterward, participants in Catholic Days at the Capitol visited their legislators to advocate for those priorities.