Taking Catholicism to the streets - or the beach 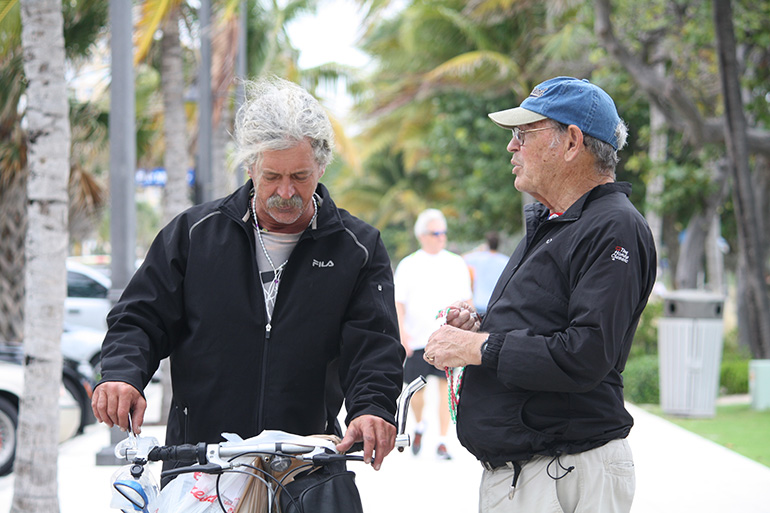 St. Paul Street Evangelization member, Fred Ford, ministers to a tearful cyclist, who shared that he is out of work and is now homeless. He graciously accepted a rosary and asked for prayer.

POMPANO BEACH | Every other Sunday morning, people strolling along the beach-front sidewalk at the public pier in Pompano Beach are casually greeted by men garbed in black T-shirts who offer to pray for them, or hand them a rosary.

The men, who look more like football coaches than evangelists, are members of St. Paul Street Evangelization, an international Catholic lay ministry that provides Catholics with the tools to evangelize the culture in a simple, peaceful and non-confrontational way. The evangelizers make themselves available to answer questions about the faith and pray with those who request it.

“This method of evangelization breaks down the barriers that people have against the Church â and that’s why it’s beautiful,” said Joseph Little, a parishioner at St. Elizabeth Ann Seton Church in Coral Springs.

He and Peter Dyga of Little Flower Church in Hollywood were inspired to start a local chapter of the ministry after reading about it on social media five months ago. 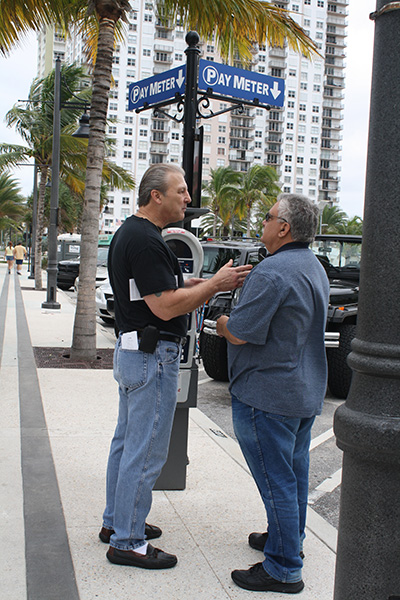 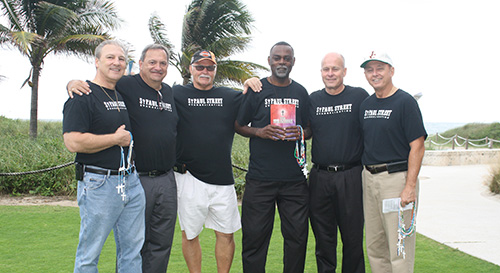 Members of the St. Paul Street Evangelization ministry gather for a photo in front of the ocean where they minister to pedestrian traffic every other Sunday from 10 a.m. to 1 p.m. From left: David Babbin, Joseph Little, Bill Amos, Josue Dumercy, Julius Hurst, and Jeff Chorba. 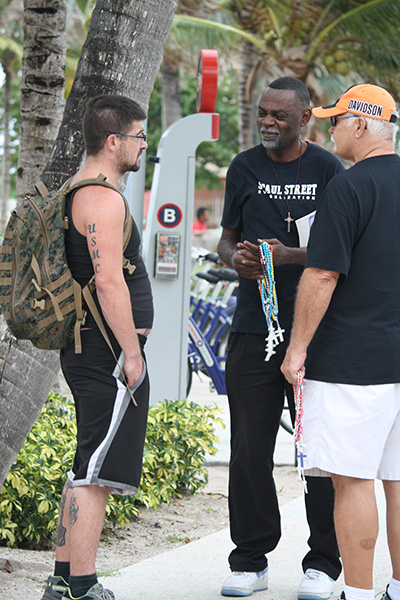 Currently, the local group, which is also open to women and youths, is composed of 18 members from two churches: St. Elizabeth Ann Seton and Little Flower.

“Catholics are surprised because they never see Catholics evangelizing in the street,” Little said. “What happens out here is that we meet so many people who, for whatever reason, stopped going to church. Perhaps something turned them off.”

SPSE has found this non-confrontational approach to be very effective at strengthening the faith of practicing Catholics, bringing back the fallen away, and dispelling misconceptions held by non-Catholics. While their mission is to work for the conversion of the whole world to the Catholic faith, SPSE evangelists recognize that the only thing they can do is plant seeds â it is up to God to make them grow.

SPSE member Fred Ford shared an example of how the ministry is bringing people home to the Catholic Church.

“The day is going well for me,” Ford said on a recent Sunday morning after talking to a young family vising from Parkland, Fla. “They were ‘so-so’ about the Church but I spoke about how uplifting our Mass is. I asked them to give us a shot and they said they would.”

Later that day, Little reported an encounter with a Catholic priest who was visiting from Chicago. He thought they were evangelicals because “Catholics don’t go out and do this,” the priest said. He left inspired to start an SPSE chapter in his own diocese.

Then there were two women â a Methodist and a Presbyterian â who after being asked to accept a rosary wanted to learn how to pray it. They both promised to pray it every morning and wanted to attend a Catholic Mass that Sunday, said Little. The women provided their names and phone numbers so the evangelizers could keep in touch and answer any questions they had.

Little gave another account of how one Sunday he felt led to walk out to the seashore, where he saw a woman who looked like she was contemplating. He walked up to her and asked if she would like a rosary. She said yes. Then he learned that she was three months pregnant and considering an abortion.

He told her, “Do you know your baby could be a doctor that cures cancer, a priest, or the next president?”

She responded that she had never looked at it that way, and started to cry. Then she held up her rosary to the sky and said, “Thank you, God.”

That morning she had been asking God for an answer about whether or not she should get an abortion. After talking to Little, she said she knew that her baby was special.

Then she asked the Blessed Mother to help and guide her in raising her unborn child, because she had lost her own mother. She asked where she could find a church and was supplied with a list of churches and Mass times.

She told Little, “I can’t wait to receive the Eucharist now that I am pregnant.” He added that “she calls every week to report the baby’s progress.”

Evangelizing is an opportunity to dispel common objections about Catholicism, Little said. For example, some may not want to pray the rosary because they think it is cultish. “We show them that the rosary is a reflection of the Gospel.”

An array of brochures on a nearby table comes in handy when questions are asked or objections are raised. Among the topics: Why be Catholic? What about Mary? How to Pray the Rosary, Reasons to return to the Catholic Church, Common Objections, The Existence of God, Homosexuality, The Truth of the Bible and the Gospel Message, Abortion: A Right or a Wrong? and The Divinity of Christ.

SPSE evangelists take to the streets and go wherever people are gathered â on a street corner, at a festival, or even at a football game.

“First we wanted to choose a park or a store or a public library. We put it to prayer and I suggested the beach at Atlantic Avenue. All agreed and we have been there since,” Little said. “One of the great things that has happened from this decision is that many people who frequent the beach remember us and are glad we return. They bring people up to us for prayers. It’s been a good location. They will flock to you once they know you haven’t abandoned them. The police are fine with it too.”