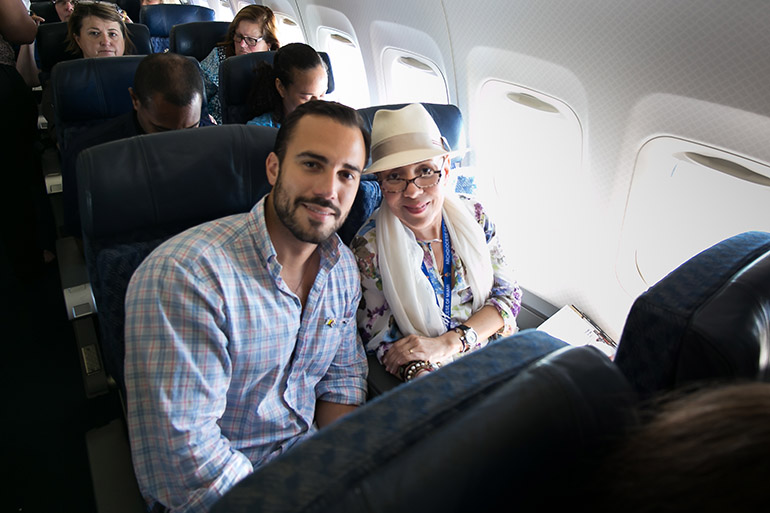 Marta Mohr and her son, Leonardo "Felice" Gorordo, pose for a photo on the plane that would take her to Cuba for the first time since her exile in 1969. 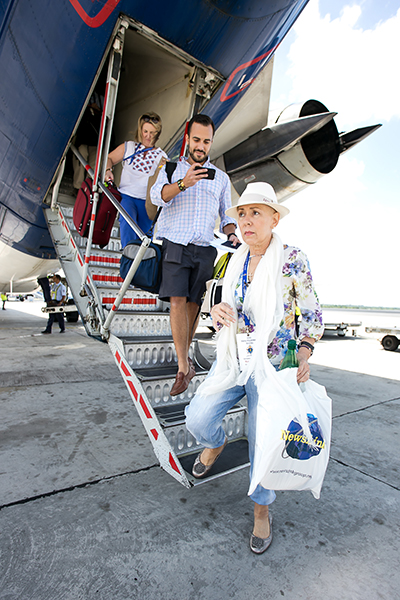 Marta Mohr and her son, Leonardo "Felice" Gorordo, arrive in Cuba Sept. 18 for the first time since her exile in 1969.

HAVANA | Marta Mohr probably got a bit more than she bargained for this month when she said ‘yes’ to a first-ever return trip to her native Cuba.

"We left in 1969," said Mohr, a Miami Cuban-American whose battle with a life-threatening illness propelled her to choose this as the right time to come to Cuba with nearly 200 other Florida Catholics. They traveled here for four days in a pilgrimage sponsored by the Archdiocese of Miami.

Mohr's son, Leonardo “Felice” Gorordo, has traveled to Cuba many times and helped establish Roots of Hope, a Miami-based nonprofit to improve the lives of young Cubans and to foster better relations between young people in the U.S. and Cuba.

"Felice talked me into it and every time he would come back from a trip, there was always a yearning from me and now because of my situation i just couldn't wait anymore," Mohr said before departing. "I think this is going to be a very spiritual experience. I think being in the presence of the Holy Father will give me strength."

As it happened, the mother and son from St. Hugh Parish found their prayers answered when, immediately following Pope Francis’ Sept. 20 public Mass in Havana, papal security allowed Gorordo to bring his mother to the pope for a blessing and short encounter before the pontiff left the area.

The meeting was captured on video by one of the pilgrims who traveled with the Miami group.

Felice, a graduate of Georgetown University whose father was a so-called Operation Pedro Pan child, told The Florida Catholic he had grown up in a household where Cuba was a nightly subject of conversation around the dinner table. 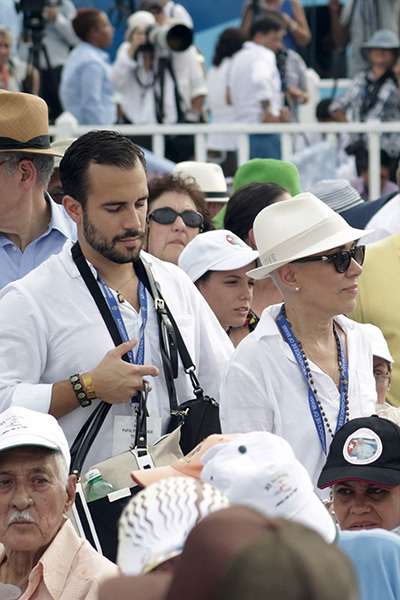 Leonardo "Felice" Gordo and his mother, Marta Mohr, take part in the papal Mass in Havana's Plaza de la Revolucion Sept. 20. She received a personal blessing from Pope Francis after the Mass ended, before he left the area.

"I was a freshman at Georgetown and had an identity crisis, so I took a class on Cuba and the teacher told me that you can't learn Cuba through a book and that you can only know about Cuba by going. I took a pilgrimage of sorts about 15 years ago. It was a great experience but I said to myself that I can't let this be anything less than a transformative experience."

Now Gorordo, a businessman who produces a software for immigration processing, said he travels to Cuba regularly with his Roots of Hope charity. He has also consulted recent presidential administrations â both Republican and Democratic â on matters of Latino community outreach and immigration.

He took the opportunity of the archdiocesan-sponsored Cuba pilgrimage to usher his ill mother around Havana for the papal visit, and after, to visit their hometown of Sancti Spiritus, Cuba.

"She was adamantly opposed to going back; because of that personal promise to her family she felt we shouldn’t ever go back. But when I came back from Cuba the first time, she was the first person to greet me at the gate, she asked me about family there and she was incredibly supportive of what I do,” he said.

“She has pancreatic late stage cancer now, and wanted to go back before the inevitable, so this is fulfilling her promise for herself and for me it is a chance to fulfill a dream for her."

As for the future of Cuba and his Roots of Hope charity, Gorordo said the most pressing issue is the lack of confidence Cuban youth have in their future there. Many would prefer to stay on the island but have too few career and job opportunities.

Regrettably, going abroad is often the preferred option for Cuba youth, he said. “This lack of hope and despair has no boundaries.”

“I saw young people my age who in their heart of hearts told me if they could, they would stay but they didn’t see hope or future on the island so they would rather (leave). I thought that is not right,” Gorordo said.

Vivian mannerud - 10/12/2015 05:18 PM
Oh how i admire this Family . The love i saw between this mother and son has no boundaries. I see she has my rosary around her neck that was blessed my pope john Paul. I pray for a complete healing for her. Honored to have been with them During mass . And especially happy for her papal Blessing . Miss you guys , love always

Other News from St. Hugh Church