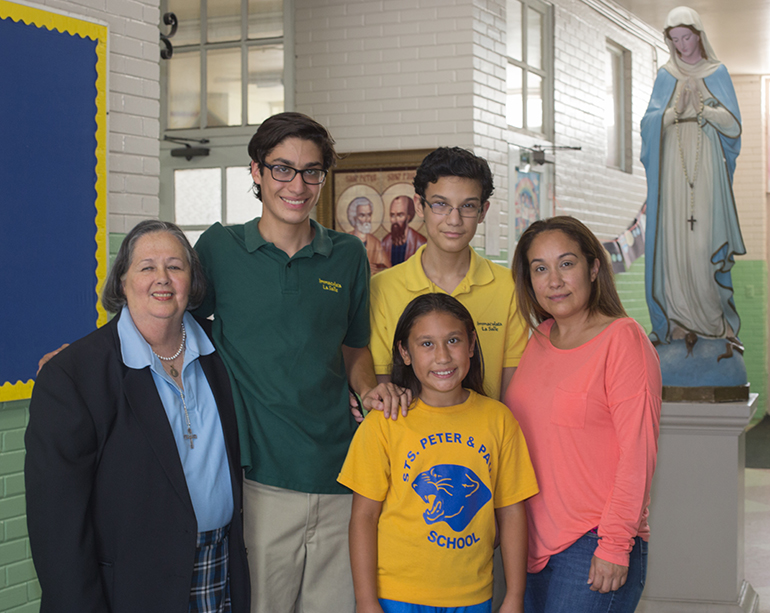 Carlota Morales, left, principal of Sts. Peter and Paul School in Miami, poses with Jason, Jasmine, Justin, and Yvonne Gago before a statue of the Virgin Mary at the school. All three siblings benefit from the Step Up scholarship program.

MIAMI | Even though Catholic homeschooling and public education are two viable alternatives to Catholic schools, they are options that Yvonne Gago would rather not consider for her children.

Gago, a single mother of three living in Little Havana, moved with her father to Florida when she was in the seventh grade, transitioning from the Chicago public schools to Sts. Peter and Paul elementary in Miami.

“It was a whole new world, a total shock and a great thing to come here,” said Gago, who now teaches pre-kindergarten at her alma mater. “It was like a home at school, like a family unit, and everyone there made sure you got a great education and that your faith was built up also.”

Though it required extreme financial sacrifices and sometimes living paycheck to paycheck, Gago managed to put her two sons through Sts. Peter and Paul. Both of them now attend Immaculata-LaSalle High School, also in Miami. Her youngest child, Jasmine, is in the fourth grade at Sts. Peter and Paul.

Gago’s children are getting a Catholic education thanks to the financial aid they receive from Florida’s Tax Credit Scholarships program, better known as Step Up for Students. 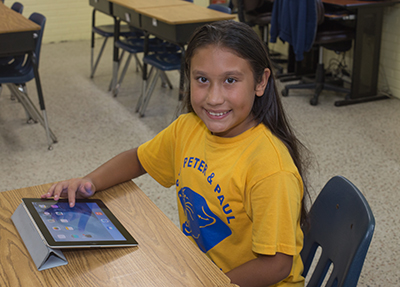 Jasmine Gago sits at her desk with her iPad in her fourth grade classroom at Sts. Peter and Paul. Jasmine is a recipient of the Step Up scholarship.

Step Up for scholarships currently enable 68,000 students from low-income families throughout the state to attend kindergarten through 12th grade in a participating private school â be it Catholic, religious or not.

Most of them, like the Gagos, are children from single parent homes whose incomes are far below the poverty level. (See box below)

The plaintiffs claim the program violates the Blaine Amendment in Florida’s constitution, which prohibits any state funds from going to religious institutions. They also claim it violates the mandate that the state establish a “uniform â¦ system of free public schools.”

But Michael Sheedy, executive director of the Florida Catholic Conference, which represents the bishops in Tallahassee, points out that “there’s no revenue from the state that funds this program. This program is entirely funded by corporate donations.”

Neither are the scholarships taking money from public schools. The corporate donations go to private non-profit organizations such as Step Up, who screen the applications, select those who are qualified, and then give the money directly to the schools chosen by the parents.

“The money never becomes the state’s money,” Sheedy said â not to mention that there is no guarantee that if it did, the legislature would use it to fund public schools.

The bishops’ concern is that children will be harmed if the program is ruled unconstitutional. So the Florida Catholic Conference issued an advisory last month urging Floridians to voice their opposition to the challenge by signing an online petition.

Archbishop Thomas Wenski also has spoken out against the lawsuit. (Click here for story).

“There’s a very real effort underway to get people to see the value of the program,” said Sheedy, pointing out that the Catholic bishops and Catholic schools are not the only ones worried about the lawsuit. The Washington D.C.-based Black Alliance for Educational Options has produced an ad featuring a Jacksonville resident who was able to attend a private school thanks to the scholarship program.

In all, 3,278 students in the Archdiocese of Miami are receiving Step Up money, out of a total enrollment of 33,445. More than 1,200 other archdiocesan students are being helped by McKay scholarships for children with disabilities or are benefitting from the VPK (Voluntary Pre-Kindergarten) program â neither of which is facing a legal challenge.

Of the 62 Catholic elementary and high schools in the archdiocese, 39 are participating in the Step Up program; 30 in the McKay scholarships; and 11 in the VPK program.

Observers say it may take a year or two for the Step Up case to work through the court system but expect it to ultimately end up in the Florida Supreme Court.

Gago’s daughter is one of 64 students out of a total of 423 at Sts. Peter and Paul who are enrolled in the scholarship program.

“I have a high percentage of Step Up students so the parents really don’t want to lose that â mainly because the students will be hurt and they won’t have the access to Catholic education,” said Carlota Morales, principal at Sts. Peter and Paul. “I have (some) parents who are very low income and this would taking away their rights as citizens to send their children where they want.”

In North Miami, St. James School has become almost entirely reliant on Step Up scholarships over the past four or five years: Some 345 of its students, out of a total of 381, are receiving financial aid through the Step Up program.

A sudden interruption of that program would be highly disruptive, according to Sister Kathleen Carr, assistant principal and religion coordinator at St. James.

“When a new student comes in from public school the academic progress and behavior improvement we see with some of them is remarkable and a lot of them heard about us from word of mouth,” Sister Carr said, noting that the school’s good reputation among area parents has been driven with no advertising.

‘It would be sad to lose something that has done so much good for so many people.’ â Sister Vivian Gomez, principal, St. Jerome School

New students and existing families were alerted to the Step Up program through direct contacts with parents and announcements in the parish religious education programs.

“Anyone who came in to register a student we would ask: ‘Have you heard of Step Up?’ It has helped some of our children go on to high school,’” Sister Carr said.

Like St. James, St. Mary’s Cathedral School in Miami now has a majority of students benefiting from state scholarship funds: 306 out of a total of 407 students receive Step Up financial assistance, according to school principal Sister Michelle Fernandez, of the Servants of the Pierced Hearts of Jesus and Mary.

Many of the students come from single-parent families where mothers often work more than one job, and loss of the corporate tax-based scholarships would mean the families would have to look elsewhere for tuition assistance.

“Our parents are not able to pay out of pocket and we would have to go to another benefactor,” Sister Fernandez said. “It would affect (single mothers) the most, so that is my biggest worry â for their children.”

In Broward County, St. Jerome School near Port Everglades in Fort Lauderdale has 53 Step Up-supported students out of a total enrollment of 300, according to Sister Vivian Gomez, principal.

The school could probably carry on without the program but it would deprive some families of a Catholic education, said Sister Gomez, of the Sisters of St. Philip Neri.

“Those students will have to go to public schools and so the state will have to invest more money,” she said, adding that the program is actually a cost benefit to Florida.

“At St. Jerome there is another nun and myself which brings the cost down because of the salary we make. Our teacher salaries bring down the cost of education, and some parents help out with things like technology donations,” Sister Gomez said. “It would be sad to lose something that has done so much good for so many people.”