Praised for selflessness, Christian charity' and being conscience' of communit 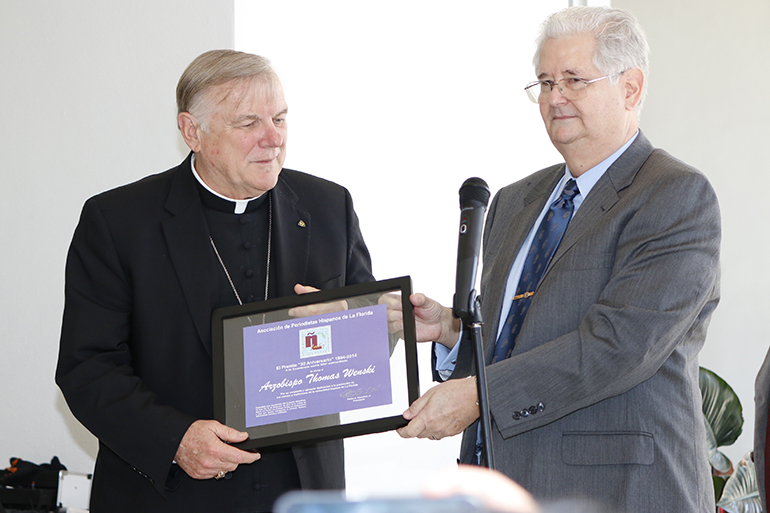 MIAMI | During what might be described as a mutual admiration luncheon, two associations of Hispanic journalists honored Archbishop Thomas Wenski for raising his voice “loudly, clearly and cleanly as the conscience of this community” â and he in turn thanked them for “bringing a voice of hope â¦ (and) truth to our people.”

Humberto Estenoz, president of the International Press Club of Miami, enumerates the reasons why Archbishop Thomas Wenski is being honored by his group as well as the Florida Association of Hispanic Journalists.

The luncheon took place Dec. 10 at Las Delicias de España in Kendall, the first recipient of the Florida Association of Hispanic Journalists' 2014 awards, given in honor of the group's 30th anniversary. The association came together this year with the International Press Club of Miami to honor Archbishop Wenski.

“For your work with Caritas in Cuba, for putting selflessness and Christian charity above politics â¦ for me you are an example not only for the Church but for the community,” said Pedro A. Gonzalez, Jr., president of the Florida Association of Hispanic Journalists.

Humberto O. Estenoz, president of the International Press Club of Miami, praised Archbishop Wenski for “being on the side of those who love and build up” as well as for “raising his voice loudly, clearly and cleanly as the conscience of this community.”

In receiving the award, Archbishop Wenski returned the compliment.“You are men and women of great worth,” he told the mostly Hispanic journalists gathered at the luncheon. 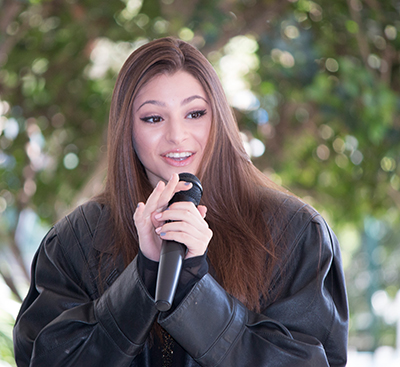 Crystal Shannon, 17, of Our Lady of the Lakes Parish in Miami Lakes sings at the start of a luncheon during which two associations of South Florida Hispanic journalists honored Archbishop Thomas Wenski. Crystal acts, sings, dances and plays the piano in Disney's web series "HitStreak!" which is filmed in South Florida.

Noting the recent beheadings and other deaths of journalists covering the various crises in the Middle East, the archbishop thanked the journalists “for what you do in our community â bringing a voice of hope, a voice of truth to our people.”

He added, “I hope to try and continue along that same line of being the conscience of the community and sharing (a word of) hope” with the people of South Florida, especially immigrants, “who bring hope to Miami.”

Corrected Jan. 10, 2015: The earlier version stated, incorrectly, that Ernesto Llerandi, owner of Las Delicias de España, had received the Florida Association of Hispanic Journalists' first award 30 years ago. In fact, the association only began giving awards this year, to mark its 30th anniversary; and the award was given to the restaurant itself, not to its owner.