Signs law that fixes catch-22' for people with disabilities who have jobs, savings

The ABLE Act is ready for signing by Gov. Rick Scott, with multiple souvenir pens for those involved in its passage.

Archbishop Thomas Wenski chats with Sister Carla Valentini of the Sisters of St. Joseph Benedict Cottolengo in the Marian Center's Adult Day Training classroom. Behind them are some of the center's 75 clients, seven of whom have found jobs in the community. Some of them have been employed for as long as 20 years.

Clients of the Marian Center's Adult Day Training program await the arrival of Fla. Gov. Rick Scott. Seven of the center's 75 clients have found been employed in the community for as long as 20 years.

Sisters of St. Joseph Benedict Cottolengo, who have staffed the Marian Center since it opened in 1963, greet Gov. Rick Scott upon his arrival July 13 to sign the ABLE Act. At left is Barbara Psinakis, director of adult programs at the Marian Center; shaking hands with the governor is Sister Filomena Mastrangelo, director of the women's residence; looking on are Sister Fausta Rondena, center, and Sister Carla Valentini, director of operations.

Gov. Rick Scott walks toward the building that houses the Marian Center's Adult Day Training program during his July 13 visit. He is accompanied by Archbishop Thomas Wenski and Sean Clancy (in back), president of the Marian Center's board of directors.

Led by the Marian Center's Barbara Psinakis, director of adult programs, Gov. Rick Scott tours the studio where adults with developmental disabilities hand-paint ceramic figures that are later sold to the public. Looking on, at left, are three of the Sisters of St. Joseph Benedict Cottolengo who serve at the Marian Center: Sister Fausta Rondena, Sister Carla Valentini and Sister Filomena Mastrangelo.

Gov. Rick Scott walks past Natasha Walker, a Marian Center Adult Day Training student who presented him with a praying hands ceramic as a souvenir of his visit July 13. Also pictured are two of the Sisters of St. Joseph Benedict Cottolengo who staff the center, Sister Fausta Rondena, left, and Sister Filomena Mastrangelo.

Gov. Rick Scott speaks at the Marian Center after signing the ABLE Act to help the disabled get off waiting lists for therapies and job training. At left are Sisters of St. Joseph Benedict Cottolengo, who founded the Marian Center in 1963 and continue to staff it.

The governor stopped by for about an hour July 13 to ceremonially sign into law the ABLE Act, which stands for Achieving a Better Life Experience for people with disabilities. Joining the governor at the event were representatives of Florida’s Agency for Persons with Disabilities and of community organizations that serve them throughout the state.

Taking its cue from a similarly named federal law passed in 2014, the ABLE Act allows Floridians with disabilities such as autism, Down syndrome and cerebral palsy to create tax-free savings accounts to cover housing, education, medical, job training and transportation expenses. The money in these accounts will not disqualify them from receiving other government benefits.

“The Church supported this bill,” said Archbishop Thomas Wenski, who attended the ceremony at the Marian Center. He said without the ABLE Act people with disabilities were in a “kind of catch-22” if they obtained a job.

“You don’t want to punish them” for being employed or saving money, the archbishop said.

Seven of the 75 developmentally disabled adults who attend the Marian Center’s adult day training program hold part-time jobs in the community, said Barbara Psinakis, director of adult programs at the center. Some of them have been working at those jobs for as long as 20 years.

The center also used to get contract work that its clients could perform, such as cleaning and re-wrapping the headphones used by airlines.

“It’s very hard to get jobs in-house anymore,” said Psinakis, since so much of that type of work has been automated or outsourced to other countries.

Right now, the Marian Center’s adult clients have one such in-house job: packaging hairbrushes. “When the work comes in, the money goes to them,” said Psinakis.

Before the bill-signing, she led Gov. Scott on a brief tour of the Marian Center’s adult day training facility. It includes a ceramics section where clients hand paint ornaments and religious articles. These are sold to the public to help support both the clients and the Marian Center.

Psinakis noted that government initiatives such as the ABLE Act, and increased funding for job-training and employment programs for the disabled, “will help us serve more people.”

Scott said that his administration has appropriated $96 million over the past three years to reduce the backlog of people with disabilities who were on a waiting list for services when he took office.

The goal is to ensure that “everybody critical will get off the waiting list,” he said.

This year’s budget also gives the Agency for Persons with Disabilities a record $1.2 billion to distribute among the more than 6,000 accredited providers, such as the Marian Center, that serve more than 50,000 Floridians with disabilities.

The goal, Scott said, is to “create more opportunities for all Floridians to get a great education and a great job.”

“There were 50,000 people on the waiting list when he became governor,” said Barbara Palmer, director of the Agency for Persons with Disabilities.

Over the past two years, the governor and legislature also have appropriated $2 million for increased job training and job placement programs for the disabled, Palmer said.

“It’s all about the children, the clients that we serve here,” Archbishop Wenski said. “We try to give of ourselves to them but they give so much to us.”

He added that Sister Lucia Ceccotti, the founder and longtime executive director of the Marian Center who died in 2013, must be “happily looking down from heaven” at the event.

Aside from the adult day training facility, the Marian center includes a fully accredited school for students ages 6 to 21 with developmental disabilities such as Down syndrome; a fulltime residential facility for women with developmental disabilities; and offers occupational, speech, physical and behavioral therapies for both students and clients.

Psinakis said the Agency for Persons with Disabilities suggested the Marian Center as the place for Gov. Scott to sign the bill.

“They know us. They know what we do here,” she said. “I am very grateful. It’s quite an opportunity for us to be able to host this.” 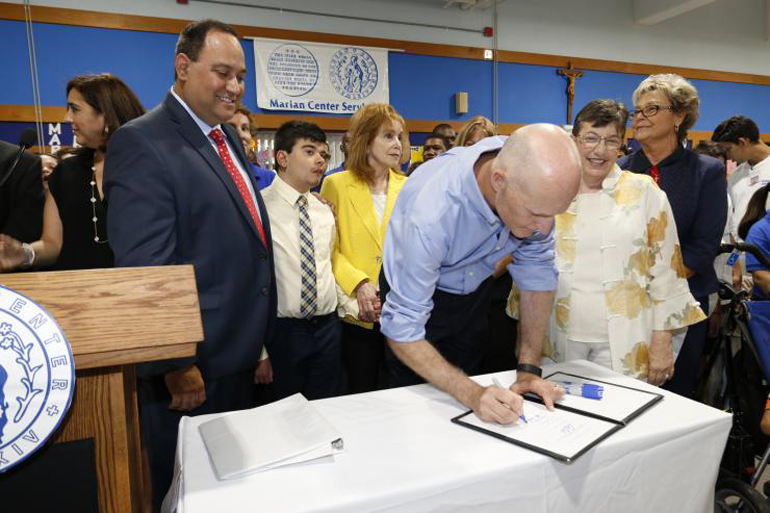 Other News from Marian Center