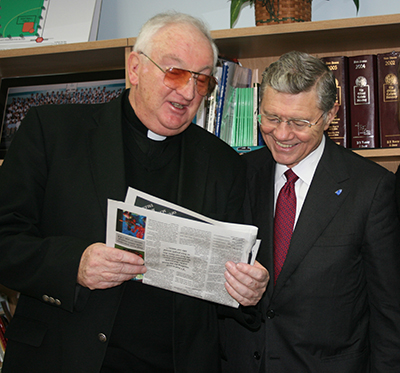 SOUTHWEST RANCHES | Throughout his 45 years in South Florida, Father Brendan Dalton has worn many hats. But his favorite two he has worn simultaneously for the past 10 years: supervising principal of Archbishop Edward A. McCarthy High School (since 2004) and pastor of St. Bernadette Parish in Hollywood (since 1991).

“In the 50 years since I was a boy in Ireland, the basic classes that students are taught haven’t changed; it’s still math, English, PE, geography, sciences, music and history. However, how the students are taught, the way they learn, and the amount of information, research and homework delivery is beyond anything we could have imagined,” said Father Dalton as he gestured to his iPad.

Faith runs deep in the Dalton family. Two of Father Dalton’s uncles were priests: Father Jim and Father John (Archdiocese of Louisville, Ky.), and his own brother, Father Bryan, is pastor of St. Ambrose Parish in Deerfield Beach. 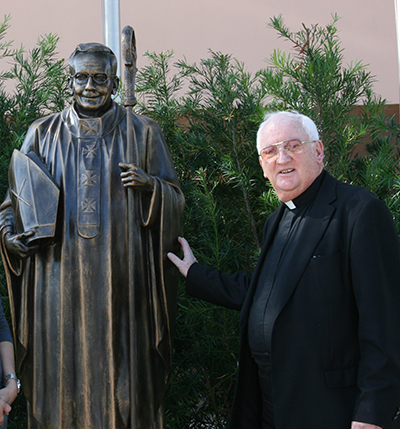 Father Brendan Dalton poses next to the statue of Archbishop Edward A. McCarthy, the school's namesake.

He has led pilgrimages to the Holy Land and other religious sites around the world, and as of May 2014 graduated over 4000 high school students.

In 2011, Father Dalton, the students, teachers and staff at McCarthy High dived into 21st century education by obtaining iPads and tutorials on how to leverage the new technology.

“Our innovative way of teaching our high schoolers attracted national interest, and we were able to help other schools understand what is needed to set up and offer technology in their schools,” said Father Dalton.

A year after launching the iPad, Archbishop McCarthy continued to integrate technology by revamping the library into the iLounge and donating the library books and outdated overhead projectors to schools in need.

“The iLounge is great; so different from my school days,” Father Dalton said. “The students sit on couches, rugs, or chairs, similar to a university setting and work on projects using their iPad. With a swipe of a finger they have access to the latest information available.”

“When we began building the 21st century classroom we promised parents and students that the classroom of the future would be complete and ready for use in four months’ time, and it was done with days to spare,” said Father Dalton.

On his strolls through the hallways of McCarthy High, Father Dalton is warmly greeted by students, some of whom he has baptized. He proudly lists the high school’s numerous awards, including the Apple Distinguished School and the 2013 Innovations in Catholic Education Award.

“We are consistently recognized by the Catholic High School Honor Roll, recognized as one of the top Catholic high schools in the nation. We do all this to help our students live up to their fullest potential,” Father Dalton said.

Father Dalton just turned 70, but he hasn’t slowed down. His schedule has him at two schools, attending meetings, officiating Masses at his parish and McCarthy High, visiting the sick in hospitals, and taking educators on tours of his 21st century high school. 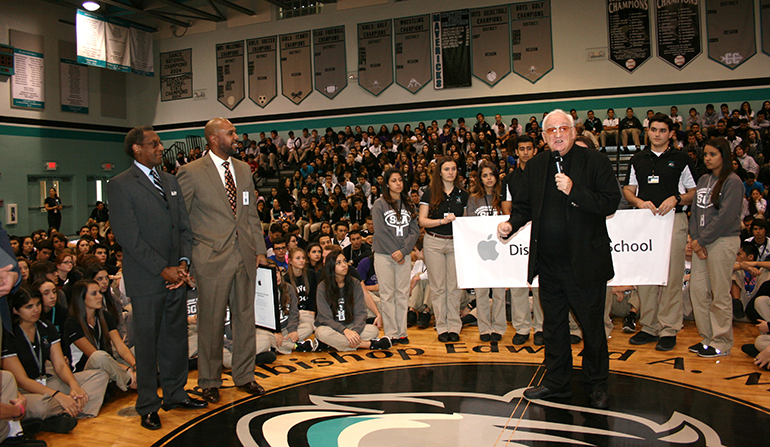