Archbishop Thomas Wenski and local Catholics donate to the cause 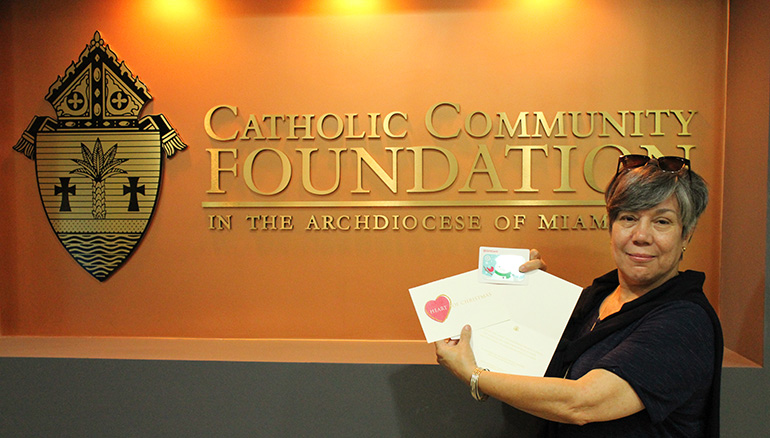 Monica Farias, the clinical coordinator at Catholic Charities' Unaccompanied Refugee Minors program, displays the Target gift cards that will be given to children and young adults in the program for Christmas.

MIAMI | As part of his Christmas gift to the needy, Archbishop Thomas Wenski donated 20 Target gift cards, worth $25 each, to children in Catholic Charities’ Unaccompanied Refugee Minor Program.

The money came from his personal charity fund, which receives donations from Catholics throughout the year. The refugee minor program tends to immigrant children up to the age of 23 who are in the U.S. without a parent or a guardian.

“They are orphaned because of war, earthquakes in Haiti and other tragedy related to refugees,” said Monica Farias, clinical coordinator at Catholic Charities and the Unaccompanied Refugee Minor Program.

Growing up in a foster home helps these children and teens acquire the skills that will lead to productive lives in this country.

Farias noted how some of those who grew up in the program have gone on to successfully complete college. One is even one graduating with a bachelor’s and moving on to his master’s degree.

She added that, on the minors’ behalf, she was grateful for the archbishop’s contribution during the holidays.

Another donation â from Madroño Restaurant in Sweetwater â allowed the kids to enjoy a night of bowling at Strike Miami along with some Nicaraguan dining.

Though the group of 20 minors was split in two for bowling, Farias said, “I have the feeling that everybody’s going to win.”