Catechesis Day 3: Lord make me an instrument of your Mercy

Shrine to Mary outside Mary Help of Christians Church on the outskirts of Krakow.

Interior of Mary Help of Christians Church on the outskirts of Krakow.

Image of St. Maximilian Kolbe inside Mary Help of Christians Church on the outskirts of Krakow.

Archbishop Thomas Wenski preaches a third and final catechesis for English-speakers at Mary Help of Christians Church on the outskirts of Krakow. In attendance were groups from Jamaica and Great Britain, as well as the group of 120 young adults from Miami and Illinois traveling with the Servants of the Pierced Hearts.

Archbishop Thomas Wenski preaches a third and final catechesis for English-speakers at Mary Help of Christians Church on the outskirts of Krakow. In attendance were groups from Jamaica and Great Britain, as well as the group of 120 young adults from Miami and Illinois traveling with the Servants of the Pierced Hearts.

Third catechesis given by Archbishop Thomas Wenski to the English-speaking pilgrims at Mary Help of Christians Church in the outskirts of Krakow, Poland, as part of the World Youth Day events. July 29, 2016.

The third theme of our catechesis is also a prayer, "Lord, make me an instrument of your mercy." Just to set the scene as to what this prayer might mean, let me share with you a parable. This parable is not from one of the gospels; it was written by a Protestant pastor in the 1950s.

"The parable of the life saving station"

Pope Francis has warned us not to be a self-referential Church - closed in on ourselves. We live in a consumerist society. And sometimes a consumer mentality can inject itself into our ideas about the Church. We see this sometimes in people who easily hop from one parish to another, or even from one denomination to another. They might say, "I'm looking for a church that meets my needs." We shouldn't be surprised at such an attitude when so many think that everything is about "me"...me....me...me. I think this is what Pope has in mind when he warns us about a self-referential church. Then we risk becoming just a club - and not a life-saving station. Then, spirituality is just an exercise in "navel gazing." But Christian spirituality is trying to conform ourselves to the image of Jesus Christ who the gospels tell us "went about doing good."

Jesus says, "The Son of Man came into the world not to be served but to serve."As a Jew, he recited the Shema Israel every day, "Hear O Israel, the Lord your God is Lord alone." At the core of both Old and New Testaments is the command to love God with all our strength and to love our neighbor as ourselves. Jesus didn't suffer and die on a cross to give us some type of feel-good religion - he suffered and died to give us a do-good religion.

Christianity is not about meeting "my needs" - the focus is not on the self but on others. Thus, we pray, "Lord, make me an instrument of your mercy." That means, feeding the hungry, clothing the naked, visiting the prisoner, welcoming the stranger. The spiritual and corporal works of mercy offer us a real good tool box for being merciful. We can be instruments of mercy to the extent that we have hearts for others.

St. John Paul II once wrote, "How can we exclude anyone from our care? Rather we must recognize Christ in the poorest and the most marginalized, those whom the Eucharist - which is communion in the Body and Blood of Christ given up for us - commits us to serve. As the parable of the rich man, who will remain forever nameless and the poor man called Lazarus clearly shows, in the stark contrast between the insensitive rich man and the poor in need of everything, God is on the latter's side. We too must be on this same side."

The parable about the life saving station is important - for it is easy for us to forget about the mission and content ourselves with just being a club. People are drowning - and we have to rescue them. That's what being an instrument of mercy is about.

Now some might object: Shouldn't we be more concerned about getting to heaven than fixing the earth? Both for us, Catholics, fixing the earth is not opposed to our transcendent destiny. It assumes it. For this earth is our highway to heaven - and our journey along this highway is our one-time chance to get to heaven. And if we're going to get to heaven - and to help others to get there - then we have to be concerned about the condition of the highway. If we were to believe like an atheist that this life is all there is, is life is not a highway but merely a dead end alley, then we don't have to care about the condition of the road. But if this is a highway to heaven then we have to make sure we take care of the potholes, those obstacles that could have us crash or break down along the way.

The adjective "parochial," even when used in reference to a parish, means "narrow-minded," concerned only with the narrow or local without regard for more general or wider issues.

We live in a world of increasing inequality. Young people know this - because young people in many countries have a hard time finding jobs in order to build a future, to form a family. Pope Francis reminds us that we have to struggle against what he calls a "globalization of indifference." We also have to be on guard against that tendency - something we see today in the debate about migration - to blame the victim.

Their example will help us navigate between two extremes - for their merciful love was always love in truth. Our love of neighbor must reflect the truth of the human person. Otherwise, our charity risks becoming distorted into mere sentimentality or, on the other extreme, a false compassion. We work for justice, for equality but at the same time we must oppose those policies born of a defective anthropology such as abortion, euthanasia and so-called same sex marriages.

Solidarity with the world of pain is not expressed in lofty propositions but to concrete persons in whom we are to see the face of Christ. The spiritual and corporal works of mercy are the means by which we man those life boats and go out and save the drowning. 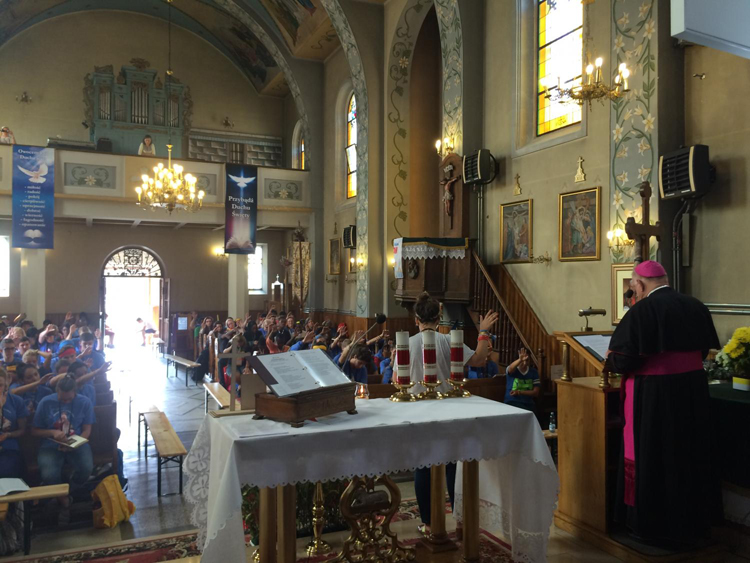 Archbishop Thomas Wenski preaches a third and final catechesis for the English-speaking pilgrims at Mary Help of Christians Church on the outskirts of Krakow, Poland for World Youth Day 2016.