Described as shy, modest, he 'flourished' as pastor at Our Lady of Mercy in Deerfield Beach

MIAMI | He was one of 14 brothers and sisters, all of whom grew up in St. Rose of Lima Parish, Miami Shores. He served as pastor of two archdiocesan churches, but literally left his imprint on one: a large stained-glass window he designed still hovers over the sanctuary at Our Lady of Mercy in Deerfield Beach, where he served as pastor for eight years.

He had been in declining health for the last year, said his younger brother, Patrick, who along with an Our Lady of Mercy parishioner, crafted and installed the stained-glass window his brother designed. 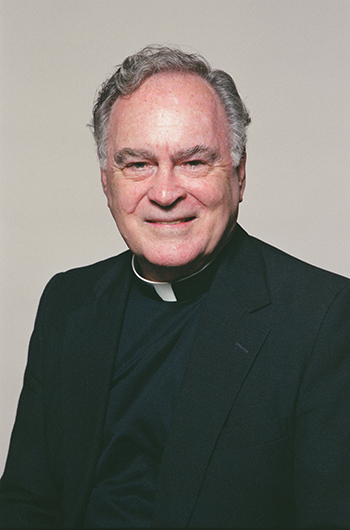 “At heart, he was an artist,” said Sullivan, noting that his brother even obtained a degree in fine arts from Florida International University. Patrick Sullivan worked as the plant manager at Our Lady of Mercy for 25 years, even after his brother left to serve as pastor of Blessed Sacrament in Fort Lauderdale in 2003.

Father Sullivan retired from fulltime ministry in January 2005. At Our Lady of Mercy, he served from October 1995 to July 2003.

“He flourished here,” said Father Kenneth Whittaker, Our Lady of Mercy’s current pastor, who ultimately completed the construction of the parish hall and dedicated it in Father Sullivan’s name in December 2016.

“He raised the money to build the parish hall and parish office. For a parish our size, that was an incredible accomplishment,” Father Whittaker said. “We probably will never build again. We don’t have the resources or really the need.”

The priest noted that when Father Sullivan arrived, the parish plant consisted of only a church and chapel. That meant all the parish functions, such as religious education, meetings and social gatherings, had to happen in those spaces – giving them an air that was more functional than spiritual.

Along with designing the stained-glass window, Father Sullivan refurbished the chapel and created some of the liturgical decorations for the church, including an icon and a “rounded, maternal figure” of Mary, said his brother, Patrick.

By all accounts, though, Father Sullivan was as low-key as the small parish he shepherded for eight years. It currently serves about 500 families, Father Whittaker said.

“He didn’t like a lot of attention but he liked this idea because he has a firm attachment to the parish,” said another brother, Daniel Sullivan, when the parish hall was dedicated.

Father Sullivan did not attend the event because he had suffered a fall. But Father Whittaker said the reason might have been because “he was very introverted, very shy, very modest. He never stepped out in front of anything.”

He attended Georgetown University in Washington, D.C. and studied history, but while there he discerned his vocation. He continued his studies at St. Mary’s Seminary in Baltimore and was ordained May 14, 1966, in the same place where he had been confirmed, St. Mary Cathedral.

His first assignment was as parochial vicar at St. Patrick (1966-69) while also serving as spiritual director of the Catholic Policemen and Firemen Guild in Miami-Dade County and board member of the Metropolitan Young Adult Ministry, Inc. During the last year of his St. Patrick assignment, he also served as spiritual director at his alma mater, Curley.

He then served as parochial vicar at St. Francis of Assisi in Riviera Beach (1969-70) and St. Ann in Naples (1970-73). For a few months in 1973 he served as parochial vicar at St. Joseph in Stuart, before being named administrator of St. Martin in Jensen Beach (1973-76) — all churches that were part of the Archdiocese of Miami at the time but now belong to the dioceses of Venice and Palm Beach.

After a year-long break, Father Sullivan took up residence at Blessed Trinity in Miami Springs (1977-81), then moved to St. Jerome in Fort Lauderdale (1981-85). While in residence at St. Jerome, he served as campus minister at Broward Community College.

From 1985 to 1995 he served as parochial vicar at St. Gabriel in Pompano Beach, then as pastor of Our Lady of Mercy and Blessed Sacrament, and finally retirement.

Father Sullivan is survived by all but four of his siblings, the majority of whom live in South Florida, as well as many nieces and nephews. Donations in his name may be made to Our Lady of Mercy Church, Deerfield Beach.