The life of St. Anthony Mary Claret, founder of the Claretians, comes to the big screen 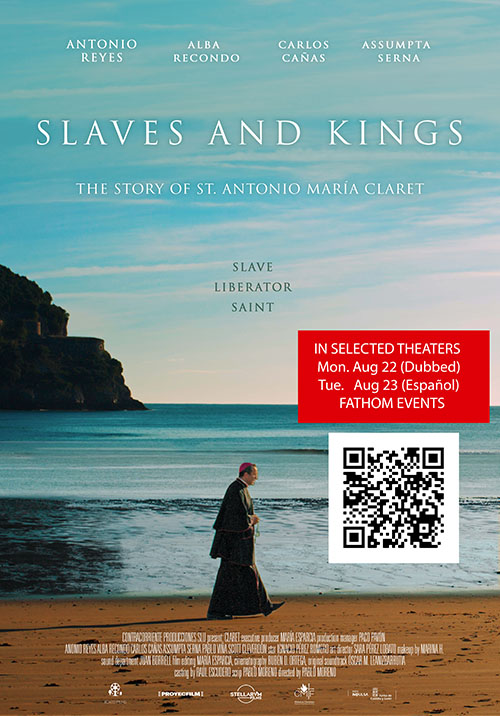 MIAMI | A new film entitled Slaves and Kings (in Spanish, Esclavos y Reyes), that tells the story of the founder of the Claretian Missionaries, will be showing in South Florida for two days: Aug. 22 in English and Aug. 23 in Spanish.

Produced by the Claretians and Stellarum Films, part of Contracorriente Producciones, Slaves and Kings deals simply with Claret’s work and the controversy that marked his life and legacy.

“Claret was the victim of a disinformation campaign. He was discredited at the end of the 19th century. When he died [in 1870 at age 63], his detractors took charge of writing his first biography,” said Pablo Moreno, the film’s writer and director, during a taping of the archdiocesan podcast, Cuéntame Catolico, and its counterpart, What the Faith, Miami?

In addition, Moreno said, “they rewrote his works with completely different content. In the end, the created for perpetuity a deformed image of who Claret really was,” an image that still can be found today on the internet.

The film narrates this very real story, which Moreno discovered while researching the life of Claret. “I was finding things that made me exclaim, ‘My goodness, this man!’ But there were things that didn’t add up. The Claretians gave me a lot of documentation, more by the pound than by the book,” he said.

He also consulted non-Claretian sources to film a movie that was as well documented as possible.

During his investigation, he found one writing that launched the “black legend” about Claret. When he asked the Claretians about it, they told them the author had written them a letter asking for forgiveness because he had based it on the wrong sources, Moreno said.

The author was the Spanish intellectual, essayist and writer José Martínez Ruíz, also known as Azorín, who was not Catholic. He discovered, after writing about Claret at the start of the 20th century, in his novel “La Voluntad” (Volition), that he had not researched it well and as a result painted a very bad picture of Claret.

Three decades later, he investigates again, realizes his mistake, and decides to tell the real story. By doing so, he contributed to popularizing the story of Claret, who was beatified in 1934 and canonized in 1950.

The film narrates the story of a religious man, a saint, but does not focus on his miracles.

“We didn’t want to make a biography, which generally is based on a series of feelings. They are sometimes more emotional than real,” Moreno said. 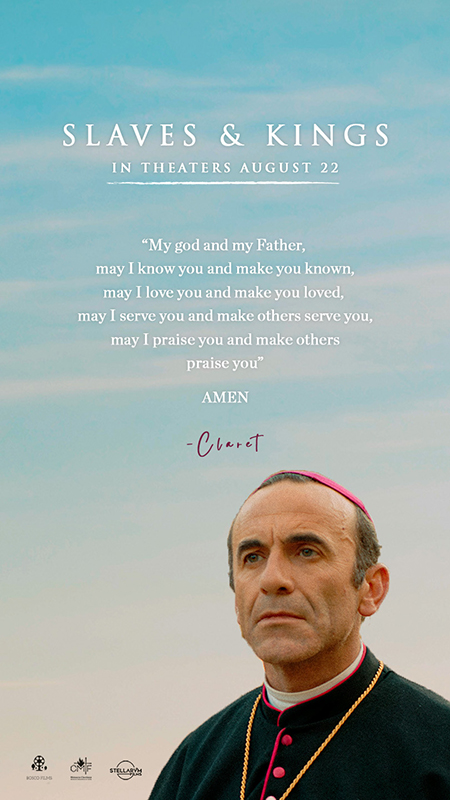 He has been producing movies with Catholic content for 20 years, and said what he wants to show in this film is, as Pope Francis says, that “there is no saint without a past and no sinner without a future.”

“The religious angle is present in a large percentage of the film. We have told the story in a way that interests us, especially to reach the non-Catholic public,” Moreno said. “We have made a film for everyone.”

Its original title in Spain was Claret, because he is well known there. Schools and streets bear his name. And though Claretians are present throughout the world, his name is not as renown.

“Reviewing the script and looking into the main themes of the movie, we said it’s a film about slaves and kings in a couple of ways. When you see it, you will understand who are the slaves and who are the kings, but in reality the story turns; the slaves are free at the end and the queen is the most enslaved of all,” said Lucía González, founder of Bosco Films, which is handling the film’s distribution.

Slaves and Kings delves into the reality of Cuba in the mid-19th century, when Claret arrives on the island as archbishop of Santiago. At the time, it was a Spanish colony with all the attendant economic interests, and around 400,000 enslaved people. Any European could have relations with a woman of African descent and not worry about the children that might ensue, due to laws that applied only to some. Interracial marriages were prohibited.

Claret criticizes everything related to this abuse and raises his voice against slavery. He publishes the Spanish Legislation for the Indies so that people in Cuba will know their rights. And he declares all days as holidays, so that interracial marriages can take place.

“Because the problem that so many children and teens are stealing, living as delinquents, is that they have to survive, because no one is taking care of them,” Moreno said.

Although Claret is a man of his times and a citizen of the Spanish crown, he advocates for members of nationalist movements who were condemned to death, asking authorities to spare their lives. Claret unites and reconciles all the different positions present on the island at the time.

He also organizes the Church itself, practically visiting the entire country by foot, something no prelate of Santiago had done in decades. Some anecdotes couldn’t be included in the movie, such as when he fell down a cliff or when he sought shelter from a storm with some companions with only a hard cracker, which they shared for food.

“That tells you he was a guy who wore a threadbare cape, a guy who lived humbly, gave himself to the people and had a real interest in knowing their circumstances,” Moreno said.

Claret always had a great devotion to the Virgin Mary. When he discerned the call to priesthood, he sought to be a missionary, taking the Gospel everywhere.

“What the Church talks about today, a Church that ‘goes out’, that’s what we’re talking about in the 1800s,” said Claretian Father Byron Macías, who serves as chaplain of the St. Paul Catholic Newman Center in Fresno, California, and as a spokesperson for the film.

Claret began a movement centered on the scriptures, Marian devotion and the Blessed Sacrament. He said he wanted to preach God through every means possible, in every place, and when he starts to do so, he begins to touch the hearts of people in Spain, particularly in the Canary Islands, where he started.

“He starts to captivate people and priests who begin to follow him. Little by little, organically, this congregation of Claretian Missionaries grows,” Father Macías said.

He is named Archbishop of Santiago, Cuba, when the congregation is in its infancy, and he doesn’t want to go. Then, from Cuba, he is sent back to Spain to be the confessor to the Spanish queen. At that point, he didn’t want to leave Cuba, but he “takes his heart in his hands,” as they say, and does so.

“St. Anthony Claret didn’t do the things he wanted to do, but he did the Will of God,” Father Macías said.

The film lets us know that no saint lives a perfect life. In fact, Claret was persecuted, people wanted to kill him, and he died in exile. Event today, he would not be on anyone’s most admired list. 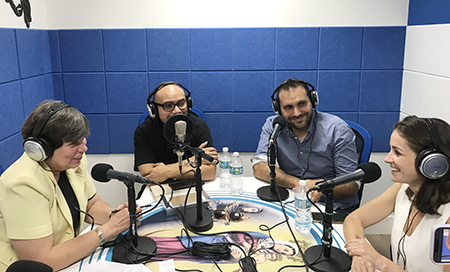 During the recording of an episode of the archdiocesan podcasts Cuéntame Católico and What the Faith, Miami? Ana Rodríguez-Soto, editor of the Miami edition of the Florida Catholic and executive editor of La Voz Católica (left) talks about the making of the film Slaves and Kings, the story of St. Anthony Mary Claret, with Father Byron Macías, chaplain of St. Paul Catholic Newman Center, in Fresno, California and spokesperson for the film in the United States; Pablo Moreno, director, screenwriter and producer of the film; and Lucía González, founder of Bosco Films, in charge of distributing the film.

“If we tell these stories where the saints are absolutely perfect, I get depressed,” said Moreno, “because I am a sinner, I can’t be like them, and above all because it’s not true.”

In the films he makes, he added, “we try to show them as they were and we are not going to lie. We are not going to invent defects. We are going to relate what we know took place and how, despite the difficulties, they became saints.”

During his 20 years in the business, Moreno has worked with religious congregations to complete films such as “Un Dios Prohibido” (A Banned God), “Poveda” and “Luz de Soledad” (Light of Loneliness.)

The idea for Slaves and Kings began in 2011, when Moreno visited the Museum of Claretian Martyrs in Spain, which tells the story of 51 young people, members of a Claretian community in Barbastro, who were executed for defending the faith during the Spanish Civil War.

Moreno liked the story and approached the Claretians about making a movie. Filming began in 2019 with a planned premiere in 2020, which marked the 150th anniversary of Claret’s death. The pandemic delayed the completion of the film until the end of 2020.

WHERE CAN WE SEE THE FILM?