St. Anthony is the mother church of all Catholic parishes in the Fort Lauderdale area.

Above the main doors, a bas-relief shows the patron saint giving food and comfort to the poor. St. Anthony Church gives out blessed bread in his honor each June 13.

Cornerstone at St. Anthony Church was dedicated by Bishop Thomas J. McDonough of St. Augustine, who was the chief shepherd of South Florida at the time. He dedicated the church the following year.

Rounded arches curve over the nave of St. Anthony Church.

Blue and white designs alternate in the chancel area.

Rather than the customary crucifix, St. Anthony Church displays an image of the ascending Christ.

The image of Christ has a distinctly Mediterranean look.

The Tabernacle, holding the consecrated bread, stands out from the wall of veined marble.

Another non-traditional touch: Rather than a bas-relief of a dove, the Holy Spirit image over the altar takes the form of a tent-like canopy.

Looking back from the altar, the organ and the rose window are visible.

The rose petal window shows several biblical scenes. At center is the Sacred Heart of Jesus.

St. Anthony has his own chapel and votive candles close to the main entrance.

Lining the nave walls are large walls of faceted glass. This one is rich in Marian symbols: a rose and lilies, for her purity; a crown, for her coronation as Queen of Heaven; and a pierced heart, for the many sorrows she bore.

Mixed symbols blend in this window. At the center is the chariot of fire that Elijah rode to heaven. Flanking it are two crowns; one for Christ's suffering, one for his reign.

The Easter window brings together some unusual symbols. At center, sunrise greets a flag of victory; at right, a butterfly stands for the resurrected Christ; and at left is a thistle, whose milky sap reminded medieval Christians of the Mother of God.

Good Friday window displays symbols of Jesus' crucifixion. They include the cross and the three nails that held him there; the sponge on a reed, which a soldier used to offer sour wine to Jesus; and the ladder by which Jesus' body was taken down from the cross.

This window recalls Jesus' humility during the Last Supper, including the pitcher, basin and cloth to recall his washing of the disciples' feet. The center monogram is a Chi-Rho, the first two letters of Christos.

Holy Thursday window tells of Jesus establishing the Eucharist. At left, a chalice is surrounded by 12 crosses, for his disciples; at right are the 30 pieces of silver, the price for his betrayal by Judas.

Scripture, both in book and scroll form, is honored in this window. The lamp in the center is for Psalm 119:105: "Thy Word is a lamp unto my feet and a light unto my path."

Another window of mixed symbols: JMJ at left, for Jesus, Mary and Joseph; two doves at center, for the sacrifice of the Holy Family at the Temple; and a priest's stole, a yoke of service to God.

Christmas window has a Chi-Rho, a Christic monogram, in a manger. At left are the royal gifts of gold, frankincense and myrrh, from the Magi. At right, the pyramids are a reminder of the Holy Family's flight into Egypt to escape Herod's wrath.

Two seraphim are flanked by a Marian monogram and three lilies, symbols of Mary's purity.

Three Marian flowers take up this window. The fleur-de-lis, at right, has become a symbol of French culture.

Most clerestory windows are small and horizontal, but at St. Anthony Church they're tall and intense. Here's St. Ann, the mother of Mary.

The Holy Spirit as a dove overshadows Mary in the Immaculate Conception.

Wildlife surrounds St. Francis, reminders of his love for nature. But he gazes toward nail-wounded hands, for the stigmata he bore.

The Holy Spirit whispers in the ear of St. Thomas Aquinas, one of the Church's greatest-ever scholars.

St. Christopher carries a child on his back, reflecting a legend that Jesus appeared to him as a youth.

St. Paul carries one of his many epistles - and holds the sword that beheaded him.

Four clerestory windows honor the Evangelists, who penned the books of the Gospel. Here's Matthew, symbolized as an angel . . .

And John, symbolized as an eagle.

St. Peter holds the Keys to the Kingdom of Heaven, given him by Jesus. Over one shoulder is the papal tiara, worn by his successors at the Vatican.

St. Therese, the youthful Little Flower, takes a traditional pose with a cross and roses.

St. Dominic helped to counter heresies in 13th century Europe. He also founded the Order of Preachers, the Dominicans.

St. Patrick brandishes a three-leaf clover, which legend says he used to illustrate the triune God.

St. Anthony cradles the Christ Child, one of the few saints so depicted besides Joseph himself.

St. Joseph is shows with several symbols: a carpenter's square, for his trade; a spray of lilies, for his purity; and a harp, for his Davidic heritage.

Christ the King wears royal robes, red for the sacrificial blood he shed. But he holds a banner of victory over death.

Marian window shows a sword through her heart, as the righteous Simeon predicted as Jesus was dedicated in the Temple.

Faceted-glass window has a large Alpha, for God as the beginning of history . . .

Window dedicated to St. Anthony has lilies, standing for his purity, intertwined with the Chi-Rho monogram for Jesus. The lilies embrace a Bible as well.

Priestly vestments in this window seem almost to emit a glow.

Elements of the Eucharist - grapes, which are pressed to make wine; and wheat, ground to make bread - frame the chalice of Holy Communion.

Our Lady of Fatima is the subject of this chapel.

Mural in a breezeway honors Polish spirituality, including St. Maximilian Kolbe and Our Lady of Czestochowa. Kolbe was canonized in 1982, after the mural was painted.

Mural in a breezeway shows Mary as a peasant girl, holding the Christ Child. The breezeway murals were painted by Fort Lauderdale artist Peter Olsen.

Anthony, who died at 36, gained prominence in two religious orders, the Augustinians and the Franciscans. And because of a vivid nighttime event, he is one of the few people – aside from Mary and Joseph themselves – depicted in artworks holding the Christ Child.

Born in 1195 in Lisbon, Portugal, Fernando Martins showed an early spirituality and, at 15, asked to study at an Augustinian abbey. He learned Latin and theology, then was ordained and served there as guestmaster. 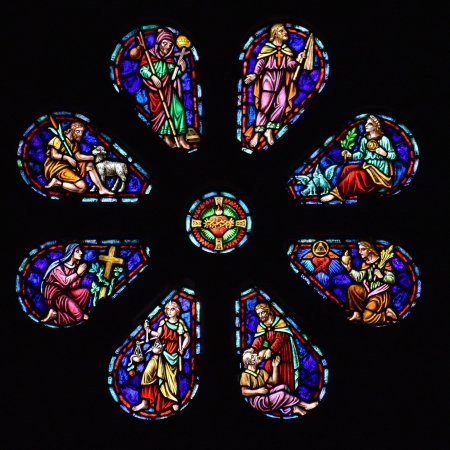 The rose petal window shows several biblical scenes. At center is the Sacred Heart of Jesus.

Fernando shifted focus when he learned of five Franciscans killed while ministering in northern Africa. He obtained permission to join that order, renaming himself Anthony in honor of St. Anthony of Egypt.

He traveled to Morocco to preach, but fell ill and had to return. He eventually went to a Franciscan hermitage in Tuscany, praying, studying and recovering.

Around 1225, some Dominicans visited, and the groups differed on who would give a homily. Finally, the head of the hermitage asked Anthony, who revealed a talent for eloquent preaching.

News of the event reached Francis himself, who assigned Anthony to teach his novices in Spain, France and Italy. Anthony’s knowledge and speaking skills also armed him to combat heretical movements of the day. He was popularly dubbed the “Hammer of Heretics,” and an admiring Pope Gregory IX called him the “Ark of the Testament.”

Anthony became renowned not only as a preacher and teacher but as a miracle worker. Among the many miracles attributed to him: 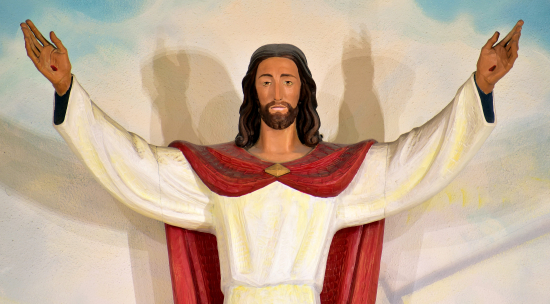 The image of Christ has a distinctly Mediterranean look.

Perhaps the most-depicted miracle was one unknown to most during his lifetime. As the story goes, a man in Limoges hosted Anthony at his country manor. One night, the host saw a light in the window and, looking closer, saw Anthony cradling a beautiful infant who likewise wrapped his arms around Anthony’s neck. The next morning, Anthony told him not to tell anyone about the event until after his death.

His health was never hearty, and as it faltered, he retired to Padua. His last year was marked by sermons on repentance and reconciliation, drawing crowds of 30,000 or more.

He died in 1231, with children weeping in the streets of Padua and, according to one legend, church bells ringing by themselves. He was so revered that Gregory IX canonized him about a year later.

In 1946, St. Anthony was declared a Doctor of the Church, a major authority in Catholic teachings. He’s the patron of lost articles and even lost people. His feast day is June 13.

The saint’s legacy is well preserved at his eponymous church in Fort Lauderdale. With Catholic families gathering for worship as early as 1913, St. Anthony is the oldest Catholic congregation in Broward County and one of the oldest in South Florida. 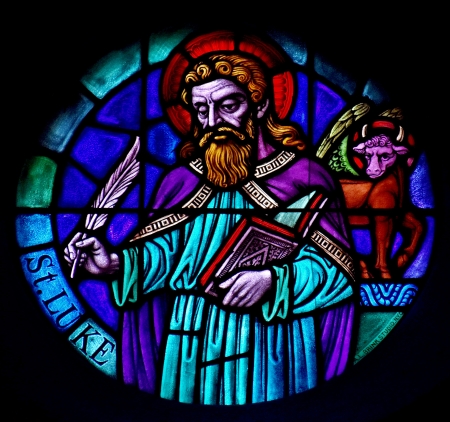 Luke the Evangelist is symbolized as a bull.

Priests from Miami visited to say Mass at various venues including a hotel, an Elks Club and a remodeled home. The congregation in 1922 built its first church, a Gothic-style, 250-seat graystone, on E. Las Olas Boulevard.

The school opened in September 1926, the same month a hurricane devastated much of South Florida. Fortunately, the thick school walls held, and the building even sheltered storm victims afterward.

By the 1930s, the graystone structure was too small for the many Catholics moving to Fort Lauderdale. Msgr. O'Looney launched another fund drive for a new, 1,000-seat church. That building was dedicated with a Solemn High Mass in 1949.

St. Anthony even benefited a Protestant church, First Lutheran of Fort Lauderdale. When the Lutherans heard the Catholic congregation was moving, they bought the stones and reassembled them a few blocks north.

Among community outreaches are ministries to the homeless, the bereaved, cancer patients, nursing home residents and substance abuse victims. Parishioners also help with Respect Life and Habitat for Humanity.