Belen Jesuit's cross-country team pose with their first-place trophy after the state cross-country championships, held Nov. 12, 2021 in Tallahassee. Belen came away with its fifth straight title, and 13th overall.

Then, just as the season starts climbing toward its apex, you lose your leader for six weeks. Most teams would crumble under such weight. Thanks to Adam Magoulas, the Wolverines plugged a new leader onto the course and won another title. 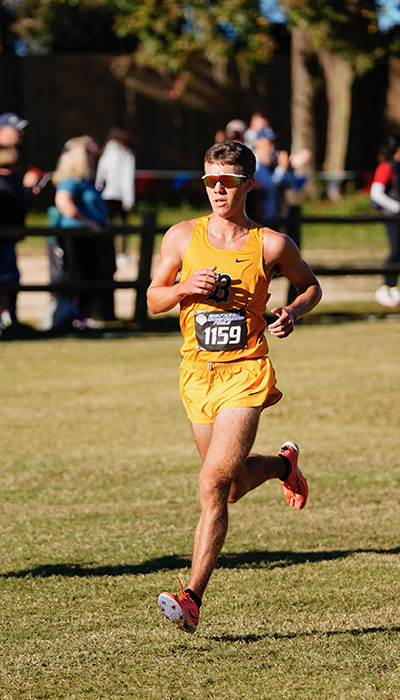 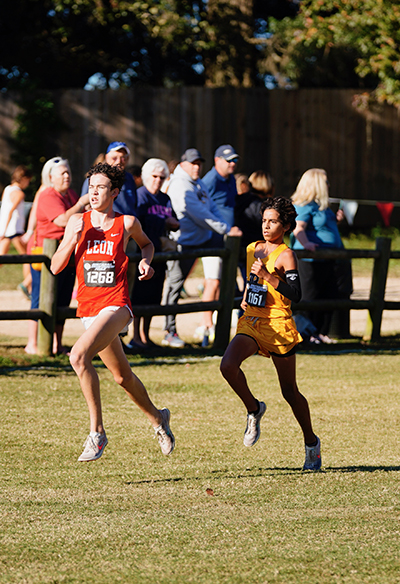 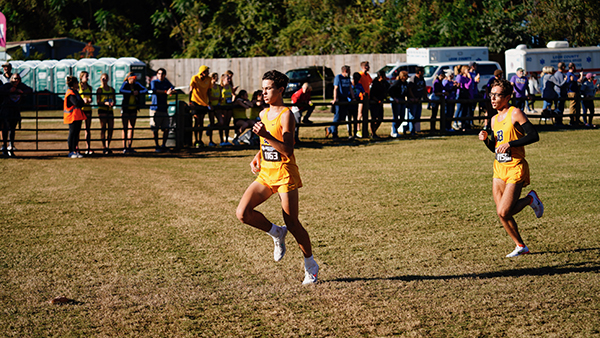 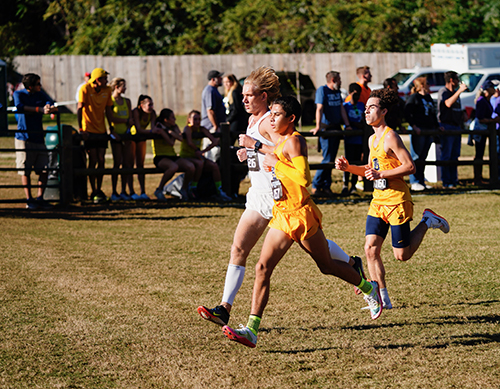 Magoulas guided the Wolverines to a 42-point finish, easily beating Fort Myers’ 132 total at the state championships Nov. 12, 2021. Magoulas has played a part in the last five Wolverines titles.

“It’s very humbling and a great experience that I’ll cherish the rest of my life,” Magoulas said. “It feels good to get my end goal, which is to win all five years.”

St. Thomas Aquinas, which didn’t qualify for state last year, finished fourth with 204 points. It was the Raiders’ best finish since a fifth-place finish in the Class 4A meet.

“I went out hard with a solid competitor like Patrick Koon,” Ruiz said. “I got 4:52 the first mile, then broke out. In the second mile, things separated.”

But the Wolverines won by finishing all five scoring runners in the top seven, while no other school had more than two in that range. Magoulas, who didn’t know until five days before the state meet that he would be able to run there, finished ninth in 16:16.1. Belen also scored sophomore Evan Torres’ 10th-best 16:16.9, junior Alec Torrecilla’s 14th-best 16:19.5 and junior Roberto Leon’s 17th-best 16:24.2. Wolverines senior Julian Rodriguez improved from last year’s 41st-place finish to take 19th in 16:25.2. The Wolverines also received freshman Joey Diaz-Quintero’s 27th-best 16:37.7.

“Our heritage is to ‘Run as One.’ It’s a mantra we’ve had for almost 20 years,” said Belen Jesuit coach Frankie Ruiz (no relation to Joshua Ruiz). “It’s ingrained in them to look out for each other. When it gets tough, go to each other. We had a 47-second compression from (runners) 1 to 5. And 6-7 are to be part of that compression as much as possible. If it comes down to the sixth man (in a tiebreaker), you’re not thinking, ‘I’m the sixth man, so I don’t count.’ They’re trained in workouts to never run by themselves. That’s what they did.”

Every pack has a leader. For the last few years, Magoulas has been that leader. Frankie Ruiz said that Magoulas has an almost military-like mindset with preparation and racing. The Belen coach said that he never appreciated how military-like Magoulas raced until he told Ruiz his plan for the first couple of races, then he ran precisely according to that plan.

Magoulas had been teaching sophomore Joshua Ruiz the ways of Belen cross country. But on Oct. 2, six weeks prior to the state meet, Magoulas ran the FLrunners.com Invitational in Lakeland. He said he was experiencing pain in his left foot, something not uncommon among distance runners. He had even set a personal record two weeks before, running a 14:57.6 on Sept. 18 at the Spanish River XC Invitational.

But when he finished the race, his foot was so sore he could not walk. He was diagnosed with a stress reaction on his fourth metatarsal that was just short of a stress fracture. Joshua Ruiz admitted, “My heart dropped. I’m not going to lie. I got emotional. Adam’s worked so hard this season on and off the track.”

Magoulas admitted as much, but still wanted to be part of a 5-peat. He reverted to a leadership position, texting his teammates to get them ready for meets while he cross-trained.

He also sought out the advice of Belen alumni who mentored him as he came up – in particular Javier Vento and Aiden Villasuso, who now run for the University of Florida. He had already been talking with both of them before the injury. “Javy just told me lead by example. Don’t tell anything that you’re not doing first,” Magoulas said. “Aiden gave me advice to not give up on kids. Kids may be on the verge of being great, and they need that last push. If you don’t push, they may fall off.”

Joshua Ruiz said Belen’s coach reminded the team to tap Magoulas’ expertise while he is still around. Ruiz, who was out three weeks with a right-heel injury during summer workouts, took that advice to heart.

“Starting with (the Florida State University pre-state meet on Oct. 16) when he was out, he called me before the race, and we were on the phone 45 minutes about the race,” Ruiz said. “When he was injured, it was like he never left.” 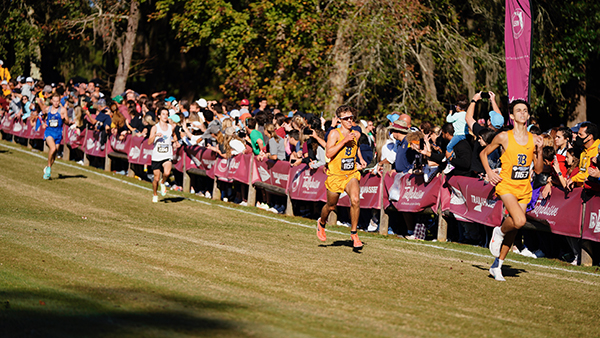 Belen Jesuit senior Adam Magoulas, rear, and sophomore Evan Torres run toward a ninth and tenth place finish, respectively, at the state cross-country championships, held Nov. 12, 2021 in Tallahassee. The Wolverines won their fifth straight title, and 13th overall, by finishing all five scoring runners in the top seven. No other school had more than two in that range. 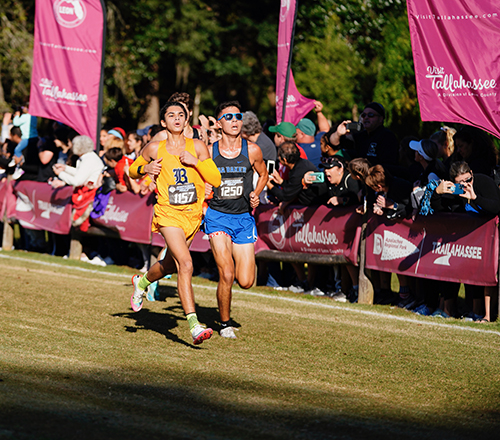 Belen Jesuit freshman Joey Diaz-Quintero runs toward the finish line at the state cross-country championships, held Nov. 12, 2021 in Tallahassee. Belen came away with its fifth straight title, and 13th overall.

Joshua Ruiz started making progress at the King of the Hill meet Sept. 10 at Tropical Park, running 16:01.94 to finish second behind Magoulas. A week later, he set a personal-best 15:29.1 at the Spanish River XC Invitational and ran sub-16 times the rest of the year. He progressed to the point he surprised Belen coaches.

“We knew he was good, but we did not know he was elite,” coach Ruiz said. “When you rub elbows with big names at invitationals, you’re certainly at another level. Not saying his bar was low, but as far as he was concerned, he was as good as Adam. He showed it.”

Coach Ruiz said that Torricella also unexpectedly became very dependable as someone who could pace the heart of the team. He was one of two Wolverines who set personal records at the state meet (Leon was the other). The Belen coach said Torres is on the brink of becoming an elite runner like Joshua Ruiz.

The Belen coach also said while Magoulas provided leadership, Rodriguez provided a competitive spirit as a senior. He found his stride at the FSU Pre-State, running 16:18.3. But he made his statement by breaking the 16-minute mark on a difficult regionals course at South Fork High School in Stuart.

“Julian shook up the top seven about midseason,” coach Ruiz said. “He had a great race at pre-state. The level of energy required for a team to develop into a state champ, you need that competitive guy, the guy who knows the ins and outs of other teams. He’s great, knowing a lot of what’s going on. He knows his team very well.”

Rodriguez admitted the stress of college applications hindered his early-season progress. But then he realized he needed to have fun his senior year and that’s when his times picked up.

He also had to learn leadership quickly, because he was in the background last year behind five seniors. But when the seniors graduated, he was thrust into leadership, especially with Magoulas’ injury. “That’s when it hit me: I have to help these guys become the best version of themselves,” Rodriguez said.

Rodriguez would lead the team in stretches and would take it upon himself in races to pull any stragglers back into the pack.

The team also continued to grow in the Catholic faith during the school year. Joshua Ruiz said he relished the return to full-school Masses. He said the team would pray before every race. “Having people like Father Willie (Garcia-Tunon), our president, driving up to Tallahassee to see us run, that’s something not a lot of schools have,” he said.

Ruiz said that Tommy Duque, the president of the Key Club, would also encourage Belen runners to join in service projects. That included beach cleanups and visits to nearby Blue Lakes Elementary School. 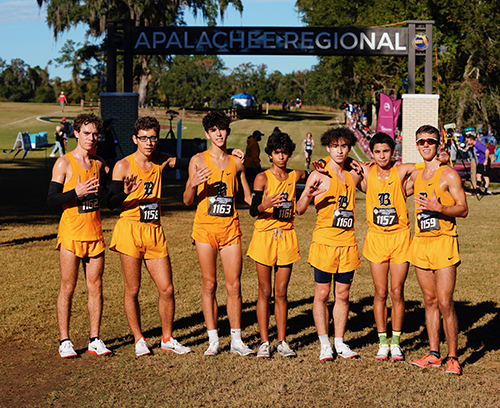 Magoulas said that the faith and running go hand-in-hand. He mentioned Bible references to finishing the race strong. He said that during last year’s pandemic, the team couldn’t huddle together and had to resort to individual prayer. “It’s the little things that institute faith into our sport,” Magoulas said. “Our team prayers before every race have been comforting. God has been with us, because he has allowed us to train as hard as we did. A lot of the homilies talk about hardships and how to push through them.”

Magoulas will continue to run at the University of Florida. He signed his national letter-of-intent Nov. 15. There he will join Vento and Villasuso while majoring in computer science. Rodriguez is still trying to decide his path.

Coach Ruiz said Rodriguez’s best running is ahead of him, and that may show up in the track season. He also expects big things out of the rest of the team as it transitions from winter workouts to track season and into summer.

The Belen coach, while graduating 12 seniors from the overall team, said he’s already thinking about a summer trip with a team that should return 12 juniors, 11 sophomores and eight freshmen. He said his athletes next year might be ready to compete at national meets such as the Nike Cross Country Invitational in Cary, North Carolina, or a Running Lane national meet out of Huntsville, Alabama.

Magoulas, however, wants to see the Wolverines become the first to win six consecutive state titles. They are currently tied with Tallahassee Maclay, which won five consecutive titles between 1998-2002. He plans to do as previous Belen alumni have done – push the current group of Wolverines.

“The program has done so much for me that I have to give back,” Magoulas said. “When it gets hard, you still have to pull through. I’ll be at their side. I’m excited to see how the team do. This team has a lot of young leaders who will step up.”