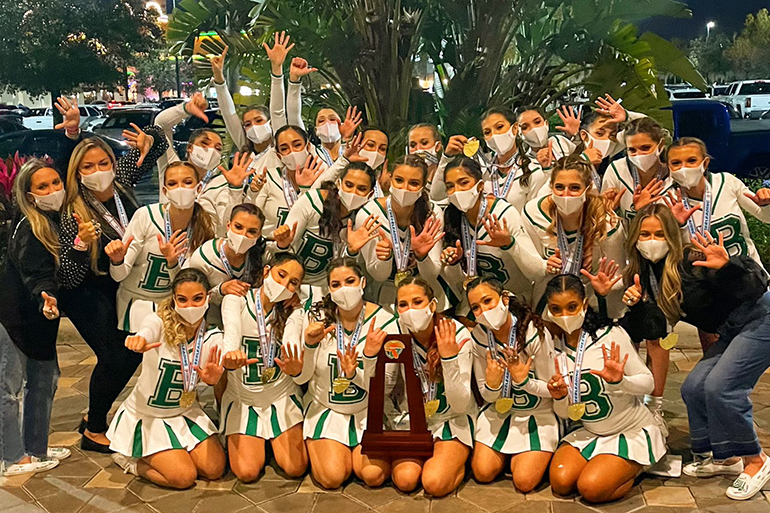 St. Brendan cheerleaders pose with their coaches and trophy for their sixth consecutive state championship, won Jan. 23, 2021. They now have their sight set on the Universal Cheerleading Association's High School Nationals, set for April 23-25 at World Disney World.

MIAMI | When St. Brendan’s cheerleading team overcame a worldwide pandemic to extend a state-title win streak, they stacked up confidence as high as some of the pyramids in their routine.

Captain Amelie Cabrera confidently said that this year a state title isn’t the Sabres’ top goal. She said as much to the St. Brendan cheerleading team on Jan. 23, 2021, after the Sabres won their sixth consecutive state cheerleading title. The Sabres won the Class 1A Extra-Large Varsity division with 71.30 points, beating Fort Myers Riverdale by 6.1 points.

Cabrera said the Sabres were elated to extend the state-title streak, but that the Sabres’ goals have graduated from state trophies to white satin jackets. Those jackets go to the division winners at the Universal Cheerleading Association’s High School Nationals.

“I got on the bus and told the team, ‘As happy as I am, don’t go thinking our season is over,’” Cabrera said. “We’re hungry for that white jacket. All 11 seniors want it bad. We’re going to bring that competitiveness and fierceness to that team. We’re not playing anymore. It’s time to work.”

WINNING WITH NOT THEIR BEST

The Sabres’ 71.30 score was the lowest of their state-title run. St. Brendan coach Arlenee Suarez said the difficulty was present in the routine, but the judges used the Sabres’ score to set the baseline. Alas, no other team in their division could meet that standard.

St. Brendan led nearly every category in the scoring tabulations. In the areas they didn’t lead, the Sabres were usually a very close second. They trailed in only pyramid executing and technique and variety of transitions.

Suarez said the Sabres benefited from strong squad-tumbling and elite stunting. She said St. Brendan had mistakes in the routine, including a fall on the first part of a pyramid. She credited the team for shaking off that mistake. “When you recover that way, you see they’re great at that skill, great at that craft,” Suarez said. “That’s what set us apart from other teams.”

Cabrera said the stunting challenges came because the group didn’t have many rehearsals together due to COVID-19. Fellow captain Sophie Nasco said those issues condensed the season, which created its own challenges.

In normal years, nationals would follow a couple weeks after the state meet. Due to COVID-19, the UCA moved its nationals to April 23-25 at Walt Disney World. The Sabres had to get archdiocesan approval to travel outside of South Florida for the state meet, and they’ll need that same approval to qualify for nationals.

Cheerleaders will benefit by getting extra time to improve the routine. Cabrera said it’s almost like getting back the practice lost due to COVID-19 restrictions. “We’re going to get our season back,” she said. Nasco said to expect more difficulty in the nationals routine and better synchronization.

That the team even had a season at all was a miracle. Due to the coronavirus pandemic, rehearsals shut down in March. Suarez said the team had very few holes because it returned 18 from last year. She said the team was strong in tumbling and stunting. She especially lauded the team’s camaraderie and their grit.

“What makes them great is how well they worked together,” Suarez said.

The Sabres returned 11 seniors. Suarez conceded that their loss will be huge, but she wants the seniors to enjoy their senior year. She said that many had been in cheer since they were little girls.

Cabrera said this year’s trials made the senior class even closer. “We couldn’t have made it through this troublesome season without the seniors,” Cabrera said. “As a grade, we’ve overcome everything. Any other class would’ve looked at the downsides. We said, ‘We can get through this. Let’s work.’”

Those seniors played a huge role in pulling together a routine in record time.

“Though they are very talented – yes, we won six championships – they are really good girls,” Suarez said. “They’re humble, sweet girls. They gave us no problems.”

The Sabres followed the leadership of captains Cabrera and Nasco. Cabrera was the more vocal captain, while Nasco led by example. Cabrera served as an understudy last year to Jacqueline de Paz and considered her a best friend. Cabrera knew Nasco and had been close to her sister.

Nasco was a first-time captain. She said it was quite a transition from follower to leader. “This year, I was more of a person who’d say, ‘You might be doing it wrong. Try it this way.’ I’d motivate people to hype them up so they can perform to their best.”

Suarez said that Nasco was a strong but soft-spoken cheerleader, one who would challenge teammates to repeat a stunt until they got it right. “When she does say something, it’s meaningful,” Suarez said. “Her leading by example helps. Amelie is the vocal one. Sophie is the quiet, lead-by-example one.”

“IT WAS HARD; WE WERE OUT OF SHAPE”

St. Brendan didn’t escape the COVID-19 pandemic unscathed. With South Florida being one of the hotspots, the school had to figure out how to keep everyone safe. Suarez said that many students went virtual, including some of the cheerleaders.

The pandemic also forced the cheer team to adapt. Normally, the team hosts tryouts for the next year in March, as soon as the previous nationals are over. This year’s team had to face the loss of practice March through October. Normally, that’s when the Sabres set the base for their success – teaching new cheerleaders the basics, learning the elite skills and building the trust to execute those skills.

The pandemic shut down practices in March 2020. That forced the coaches to meet virtually, then communicate workout plans to the team virtually. The team didn’t return to full practices until October. Nasco said even then, the team had to split in groups of 10-15, and it wasn’t until November that the team practiced together.

“It was hard. We were out of shape. We were working out during the quarantine, but it’s not the same as getting in the gym and working on stunting,” Cabrera said.

A few team members even missed two weeks of practice in early January – the weeks just before the regionals. Hence, the shaky routine at states.

Even the typical faith-building activities and charity work St. Brendan Cheer does needed retooling. Suarez said the team continued their work in feeding the homeless. Instead of gathering to make the sandwiches, each team member contributed pieces of the sandwiches. Then sisters Carolina and Sophia Garcia and their mother would go to each house, gather the pieces of sandwiches, make them and deliver them.

They also made donations for the school’s annual toy drive and attended Mass together, in addition to praying before practice and events.

“We have to be grateful for the opportunities given,” Suarez said, “not only to compete together, but – especially under these circumstances – that we’re blessed for health.”

DON’T LOOK AHEAD JUST YET

Normally, by the time March hits, the team would have congratulated the seniors for a job well done. The Sabres would also begin preparations for onboarding newcomers and planning a summer full of workouts and camps.

Unlike previous years, when the team would take a break before beginning that onboarding, those athletes who return will still be fresh from competing at nationals and in top shape. Yes, the Sabres will have to replace those 11 seniors. But a junior varsity that is every bit as competitive as the varsity at nationals will feed the next generation of Sabres.

“We will be ready,” Suarez said. “We normally have tryouts toward the end of May, but I’ll push that back to the beginning of June. “We’ll be in better shape for the upcoming season. We will be working together.”