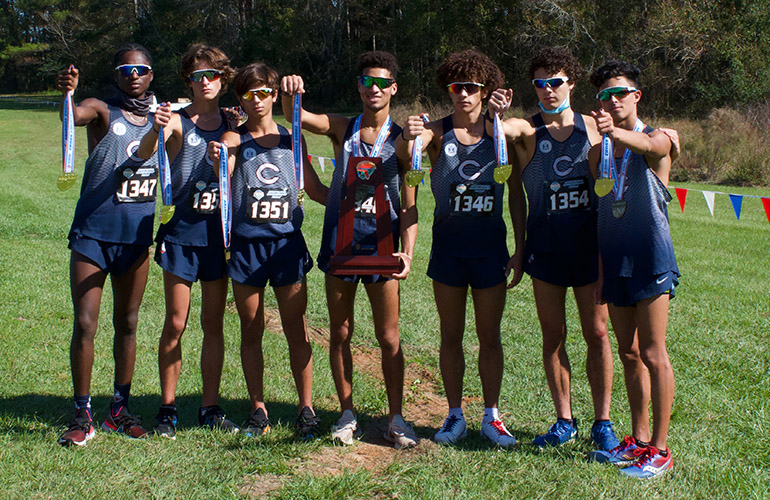 Christopher Columbus High School's cross country team show off their gold medals after winning their fifth state championship, Nov. 14, 2020 in Tallahassee. The team played with DQ emblems on their uniforms in memory of Danny Quesada, a Columbus cross country runner who died in 2019 at the age of 18 after a long battle with cystic fibrosis.

MIAMI | Other teams may have faster runners, but Eric Pino's Christopher Columbus Explorers overwhelm you with their team unity.

The Explorers won their first title since the 2010 Class 4A crown. Columbus rebounded after finishing seventh last year and eighth in 2018.

“Malcolm is smiling, because all seven runners beat Viera’s No. 5,” Pino said. “That’s the way to victory: Malcolm catches 15 people.”

Brown, who finished 34th overall with a 16-minute, 48.0-second time, said he started his kick with 800 meters left. Pino said Brown is an 800-meter specialist, so his closing speed is strong. 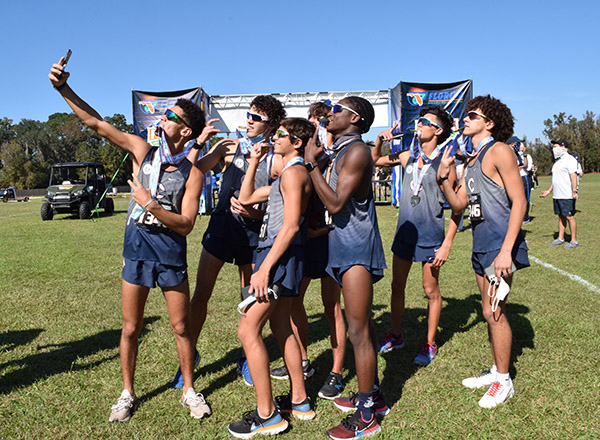 Christopher Columbus High School's cross country team take a selfie after winning their fifth state championship, Nov. 14, 2020 in Tallahassee. The team played with DQ emblems on their uniforms in memory of Danny Quesada, a Columbus cross country runner who died in 2019 at the age of 18 after a long battle with cystic fibrosis.

Pino said the Explorers take pride in the spread between the Explorers’ first and fifth runners. His goal is for everyone to finish within 30 to 40 seconds of each other; Saturday’s spread was 43 seconds.

STAY CLOSE TO EACH OTHER

Canarte led the Explorers at the first mile, then Christian Ivonnet took Columbus' top-10 spot after the second mile. “We were in the first mile, and I saw that the two Nease guys had gone ahead,” Christian Ivonnet said. “I knew it would be a race between third and 10th. Me and Alvaro stuck together, leaving the rest of the team to come with us. We had to catch as many people as we could the last half-time. We were able to do it.”

While Christian Ivonnet led the first pack of Columbus runners, his brother Nicholas led the rest of the runners. Pino said that Nicholas Ivonnet will sit back for a bit. As the race progresses, he passes his teammates, who then latch onto him. The group then passes other runners to finish strong.

“I knew that to win the state meet, we had to come in together to capitalize on every moment,” Nicholas Ivonnet said. “We were up the whole way. The last stretch, we knew we had the speed and guts to finish.”

PUT IN THE WORK

Christian Ivonnet said that the championship team formed its foundation at the end of last year. He said the Explorers wanted to train far more than last season. Te stated goal was to run more as a group rather than separating. “I feel positive we won the race the way we attacked each mile mark,” Ivonnet said.

As with most teams, the Explorers had to contend with COVID-19. Pino countered by setting his team up in a “bubble” for the cross-country season. He especially lauded the seniors for giving up social activities that a senior typically would partake in to practice in accordance with school and government guidelines. He said the medal justified the sacrifice.

The Explorers broke the team into four practices each day, working out in groups of 10 spread out by 30 minutes. They were able to spread out at Tropical Park.

Pino also relied on his assistant coaches Danny Areces and Chris Ventura to help his team get through the practices. Ventura, who ran for Pino on the 2008 champion team, focused on calisthenics, flexibility and mobility. He also added daily meditation for the team. “What we try to do is attack the program from every single angle, not only physical, but also core training, flexibility and mind, so we’ll have a holistic athlete,” Ventura said. “That way, someone is prepared for anything. It’s been a great season with these boys.”

That work began to show off early in the season, when Columbus was finishing second to cross-country power Belen Jesuit in the FLRunners.com and FSU meets. Pino credited Areces with scheduling tough meets early on, gauging the Explorers’ process.

The teams supported each other as well. Columbus’ runners supported Belen in the early race, while Belen’s runners supported Columbus in the late race. “Day in and day out, it’s a good competition between us and Belen,” Pino said. “They were there for us, and we for them.”

Three seniors have been on Columbus' team since their freshman year – Canarte, Scarcello and Brown. Canarte said the program helped build toughness inside him. He said that being the fourth runner his sophomore year propelled him to work harder. It started paying off his junior year, and the dividends came to fruition this year.

Scarcello battled injuries and other medical issues in his first three years in the program, leaving him to go big his senior year. “To the team, the coaches, family, I have to give my all at the state meet,” Scarcello said. “I’m glad to be on this team.”

Nicholas Ivonnet and the returning Explorers now look to try to build a team that competes for championships every year. He said Columbus brought three guys who were freshmen and sophomores. “Those guys have seen how we did it today, what it takes to win a championship.”

Pino said that it’s important that athletes realize not only their contribution, but also the responsibility they have to the program. He always wants to build a contender.