Preaching the Gospel in a new way

CORAL GABLES | Slogging through the muddy jungle hauling pipes. Constructing a concrete water tank. Installing the pipes. Celebrating, with their Caribbean neighbors, the completion of a clean water project that helped transform their lives.

St. Augustine Church’s administrator, Father Richard Vigoa, shared those experiences — of a December mission trip to the Dominican Republic — as he chatted with leaders of BLUE Missions on a recent livestream of Bless This Kitchen.

As jazz played, the priest and his lunch guests, BLUE Missions co-founder/CEO Danny Rodriguez and his father, Jorge Rodriguez, ate shrimp creole atop the white quartz countertop, and an intern filmed their conversation.

The 1 p.m. Thursday program is the most nourishing of St. Augustine’s multiple online initiatives in response to the COVID-19 pandemic. It features Father Vigoa interviewing parishioners over lunch in the rectory kitchen.

Other virtual offerings include a weekly town hall, the most recent of which was called "A Night to Listen: Black voices share." (See video above.) The church also livestreams Masses and spiritual events, such as a June 9, 2020 prayer night for an end to racism. 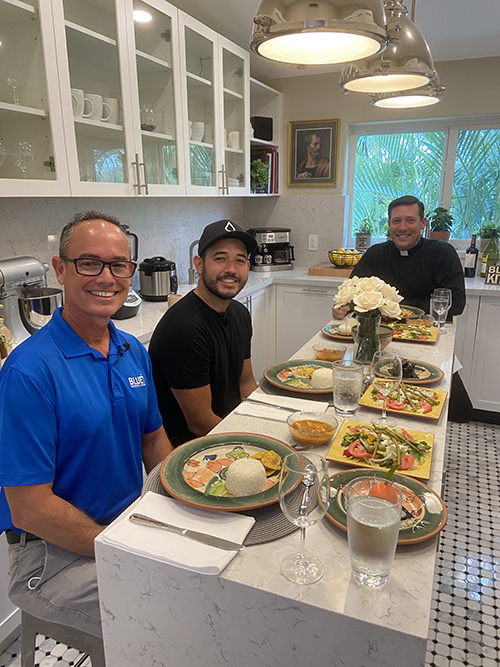 Father Richard Vigoa, rear, shares lunch with Jorge Rodriguez, left, and his son, Danny Rodriguez, during the filming of a June 4, 2020 episode of Bless This Kitchen at St. Augustine Church in Coral Gables. Danny Rodriguez co-founded BLUE Missions with his sister; their father now serves as chief growth officer.

Before the coronavirus hit, Father Vigoa wasn’t exactly Rev. Techy. He didn’t even have a Facebook page or interest in social media. But the trial-by-fire pandemic unleashed his virtual creativity. He rapidly brainstormed with staff and parishioners, learned about various technology platforms and broke through his firewall of resistance to upgrade St. Augustine’s online spiritual offerings.

“Many people after Sunday Mass would say, ‘Please publish your homilies’ or ‘Can you do a podcast or a video?’ and I’d always resist. I’d never wanted to do that. And then coronavirus pushed me into the social media world full force,” said Father Vigoa, 50, who now has both Instagram and Twitter accounts (@FrVigoa). “It’s a lot of parishioners who come together, who help put this together. And the whole objective was to keep everybody connected to the parish, connected to Christ.”

The inaugural Wednesday evening town hall back on March 25, 2020, featured Archbishop Thomas Wenski and Miami Mayor Francis Suarez. “It was my favorite because it was new and exciting and I didn’t know where this was going to go,” Father Vigoa said.

The church has invited big names to its town halls, in the process discovering that most speakers are now grounded and available. Guests interviewed remotely have ranged from theologian Ralph Martin and Vatican Swiss Guard Mario Enzler to speaker Chris Stefanick and their biggest draw, Mexican film star Eduardo Verastegui.

St. Augustine's YouTube page, where all the town halls, Bless This Kitchen and Masses can be seen, has over 1,000 subscribers.

“I thought my mother and my sisters and a couple parishioners would watch and it’s turned into a beautiful thing where the parish is watching. And I’ve had people from all over the United States and some friends in Europe who are watching,” said Father Vigoa, who is working on a licentiate in sacred theology focused on the new evangelization.

“My attitude has changed because I see the importance of social media to be able to reach people where they’re at," he said. "We’ve had to learn how to be Church in a different way. We’re still the body of Christ but how do you preach the Gospel, that is the same Gospel, in a different way, with ardor, with fervor and excitement?”

“It’s a great learning experience to see all the different ways we’re able to express our faith in these trying times. At the same time, it provides an opportunity to see what’s going on out there in the world in terms of what other people are doing in the faith,” he said.

Because people from outside South Florida and beyond can tune in, he added, "there’s a lot of opportunities in evangelizing through social media.”

And his enthusiastic pastor has “come full circle” in digital engagement. “There’s a lot of meaning behind this, a lot of power,” Beyra said.

The church purchased equipment from Sling Studio for about $1,500 that livestreams Masses and other parish events to multiple platforms while recording them, using multiple cameras to allow different angles for the choir, lector and priest.

For Father Vigoa, it’s all part of being present to his congregation.

“It’s a lot of work and it’s very, very stressful. Sometimes the upload speed is not enough and it doesn’t look as nice as we’d want it to be and you get into all these technicalities," he said. "But we have parishioners who have really stepped up and said, ‘Don’t worry, Father, we’re going to take care of this,’ and have shown me so much.

"We went from a webpage that was outdated and old and kind of not even useful to being updated several times a day and hopefully being a tool where people can find resources and get their information,” he continued. “And I’m constantly thinking of new ideas.”

Once pandemic conditions improve, he plans to scale back but continue livestreaming.

“I really love it because parishioners are getting to know parishioners and in the long run this is going to make our parish stronger, more viable and on fire for the Lord,” he said. “I just think the silver lining in this coronavirus is we truly as a parish have grown leaps and bounds."

BLUE Missions, celebrating its 10th anniversary year, has brought clean water and sanitation to over 30,000 people in the Dominican Republic and other parts of Latin America.

Pre-COVID-19 cancellations, the organization had 675 volunteers signed up to construct 40 projects this summer.

At the end of each mission trip, the volunteers celebrate by frolicking in the water of life with the local community. They call it "water day." 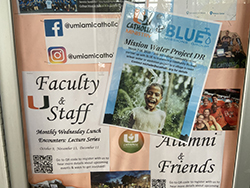 It's “a culmination of the hard work, sweat, and desperation of community members going without water for so long. It’s a moment to gather around the pipes for the first time and test the system. It’s a celebration,” said BLUE Missions CEO Danny Rodriguez, an alumnus of Christopher Columbus High School in Miami, who co-founded the non-profit with his sister, Nicole Garcia.

“Water changes lives and what we don’t even realize that day is that all these people are thinking about: that I don’t have to walk miles to fetch water anymore,” added Danny's father, Jorge Rodriguez, Blue Missions' chief growth officer.

As they savored the mousse dessert while taping Bless This Kitchen with Father Richard Vigoa, administrator of St. Augustine Church in Coral Gables, the priest vowed to spread their good news in more parishes and schools.

“When you’re on the BLUE mission," he said, referring to his own trip in December, "the Lord taps you on the shoulder and says I’m the most important and you’re now to go out and serve your neighbor and love your brothers and sisters."

Parish person - 07/25/2020 12:38 PM
Correction: Fr Richard had an Instagram account long before the pandemic. The parish had a FB account but it wasn't very active before volunteers came to help