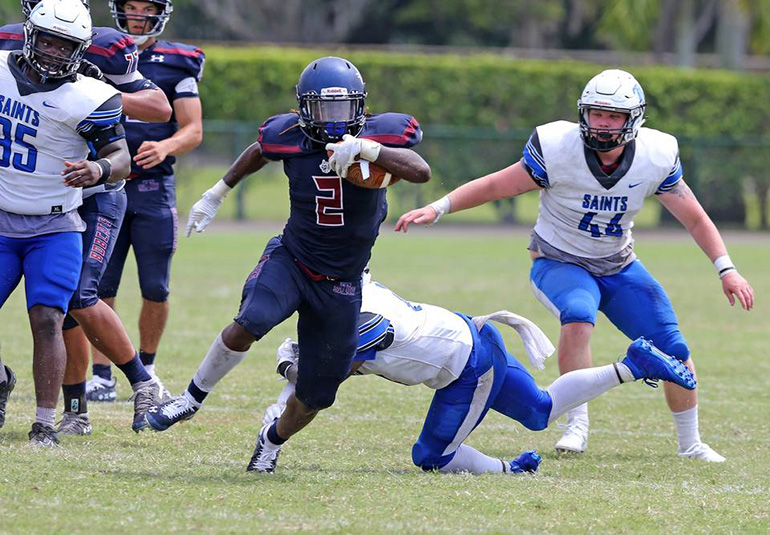 MIAMI GARDENS | It’s only fitting that St. Thomas University’s football team contended with a hurricane before its inaugural football game. From the moment head coach Bill Rychel set foot on campus last fall to the Sept. 7 season opener against Thomas More College, his Bobcats have undergone a hurricane of activity to build what Rychell calls “the community’s team.” 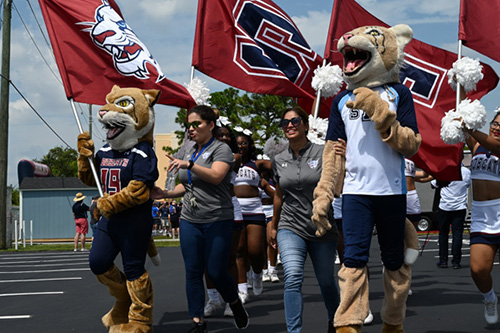 The Bobcats, who’ve won 1 and lost 2 so far, are fielding a roster filled with athletes from Miami-Dade, Broward and Palm Beach counties. St. Thomas hopes to harvest one of the nation’s most fertile recruiting grounds to build a winning program.

To do so, President David Armstrong tapped a familiar name to lead the Bobcats. Rychel served as an assistant at Notre Dame College in Ohio from 2009-16, while Armstrong was president of the university. Rychel was offensive coordinator at Division I Football Championship Series-level Savannah State from 2016-18.

“When (Armstrong) took the position as president at St. Thomas, I called to congratulate him,” Rychel said. “He asked if I’d be interested in starting a football team, and I said, absolutely.” 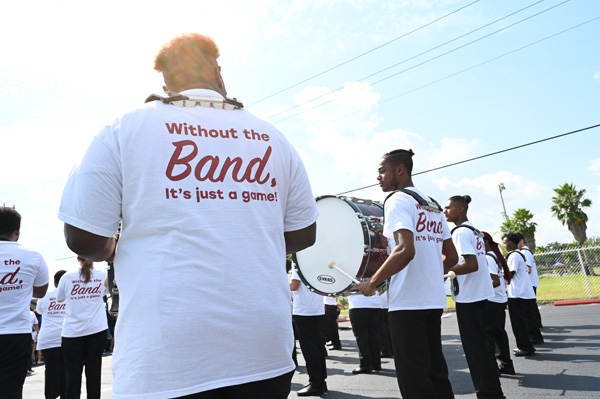 St. Thomas University's marching band makes its way to the field for the school's first game.

He also turned to others who excelled. Defensive coordinator Alex Gray played at Division I Appalachian State. Running-backs coach Terry Swanson was a first-team all-Mid-American Conference selection at the University of Toledo. Cornerbacks coach Steven Everson picked off six passes as a senior at Thomas More in 2018. Strong-safeties coach Regis Scafe has more than 30 years coaching experience at high-school and college levels. Receivers coach Roy Smith was a track athlete at the University of North Carolina.

“Anytime when you’re hiring people, you want to hire people you trust,” Rychel said. “From a startup scenario, it’s even more magnified. Here, it’s so much more than coaching football. With guys who have been with me before, it makes it easier to not have to teach every single thing about how we do things here.” 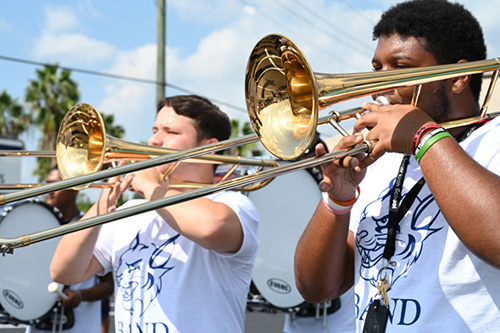 Rychel had a blank canvas when it came to building a roster. However, St. Thomas’ reputation for academic and athletic success already dictated that Rychel choose quality when building his team. He said that quality is a drawing card.

“We have a ton of great majors,” he said. “We’re the first to start a sports management program, and we have a law school.”

While he brought in a fair number of transfers, he wanted freshmen to form the Bobcats’ foundation. He banked on many of them wanting to make history. Ultimately, he wanted to set recruiting roots in south Florida.

Of the 121 who came out for football, more than 100 are from Palm Beach, Broward and Miami-Dade counties.

“If you want to be successful in whatever football program you have, you have to do a good job recruiting your home area,” Rychel said. “For us, that’s the tri-county area of Palm Beach, Broward and Dade. That was our focus.

“The best way was to focus on freshmen who can invest in our program. We didn’t think transfers were the right type of base. We have some of those guys, and we will add those guys who are a good fit for the program, but it’s better for us to have guys out of high school.” 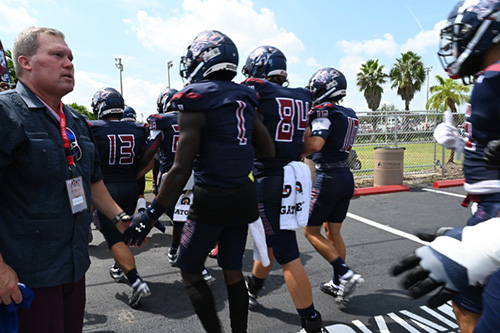 St. Thomas University President David Armstrong cheers the Bobcats as they prepare to take the field for their first game.

A PLACE TO PLAY

St. Thomas had to settle into a couple different homes to play football. First, the Bobcats searched for a league and conference. The National Association of Intercollegiate Athletics made sense for the Bobcats, largely because the NAIA has several teams in the area — many with similar missions. Rychel said that NCAA Division II would have forced St. Thomas into a lot of travel.

He said that trying to get to the lower-level NCAA Division I of Florida Atlantic or Florida International universities was unrealistic at this point. He said that level does not value a small faith-based school that values athletics.

The Bobcats then settled into the Mid-South Conference, which gives them a conference slate with several Florida teams. Rychel said that having several conference foes close to home gives players’ families and friends more opportunity to see their games. 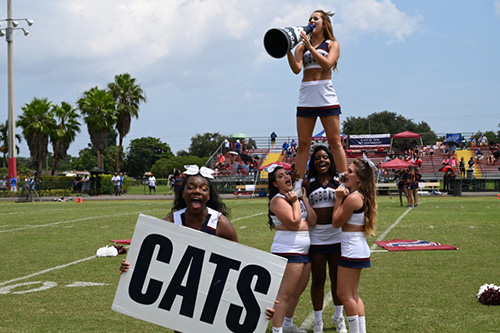 St. Thomas University cheerleaders root for the Bobcats at their first game Sept. 7.

Then they needed a field. Without an on-campus stadium in which to play, the Bobcats turned to two local high schools to host their home games. Next-door neighbor Msgr. Edward Pace will host all but one of their five home games, while St. Thomas Aquinas in Fort Lauderdale hosted their second one, a 31-38 loss to Point University Sept. 21.

Rychel said that having games at Pace makes it easier for St. Thomas students to experience a college game-day atmosphere without having to travel across town.

“We’ve been good partners with the archdiocese, so when we decided to play, (Pace) was most conducive,” he said. “(St. Thomas Aquinas athletics director) George Smith said, ‘I would like for you guys to play a game here.’ We have a lot of alumni from the Fort Lauderdale-Broward area.”

Rychel said for fans to expect a fun brand of football. His offense will be no-huddle, up-tempo. To play fast in general, his team will simplify the offense. 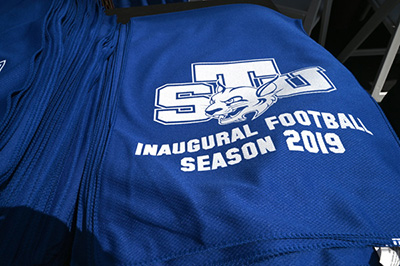 He brought in seven quarterbacks, with Coral Springs’ Jordan Sepulveda getting the start in that first game. Although the Bobcats lost 14-38, Sepulveda made history by throwing the school’s first touchdown pass. During the second game, a 45-20 victory against Kentucky’s Union College, he shared quarterback duties with Olympic Heights alum James Micioni.

“It’s a different scenario, with them being freshmen,” Rychel said. “There’s not a pecking order like when you have a bunch of seniors who have been in the offense. There’s a lot more competition.”

Robert Armes has excelled at running back, while Demonte Oliver and John Israel Cooper are shining at receiver. Rychel said center Joey Suarez is emerging as a leader on the offensive line.

Rychel looks for a defense that will attack teams, not be a bend-but-don’t-break version. He said Donnell Bennett III, a Cardinal Gibbons High School grad who was one of 25 early enrollees in January, has emerged at outside linebacker. Defensive end Cyrus Turnquest is also excelling. The secondary is led by David Crawford, while linebacker Keshun Horton, a transfer from Notre Dame College, is also contributing. 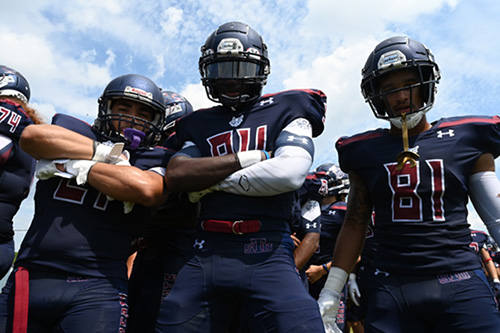 While the Bobcats will play at local high schools, they want to eventually move games on campus. According to Rychel, the next goal is to build a turf field on campus that will serve all sports. Then the university will build a competition field with a track that will serve as the football facility. 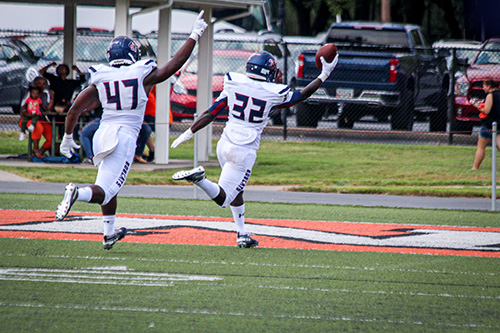 St. Thomas University Keiondre Gaulden returns a punt for a touchdown during the Bobcats' first win, on the second game of the season versus Union College in Kentucky.

When recruiting, he said he was being realistic. He didn’t promise that all the work would be completed by the time these freshmen are seniors. But he did promise them an opportunity at setting history.

He said that all the building is to improve the student experience. After all, football is just part of the building excitement at St. Thomas University. It has showed in increased enrollment. After having 900 undergraduates total in the school, the university enrolled 600 freshmen this year alone.