Vatican City | Pope Francis announced Sunday he will create 13 new cardinals, from every part of the world, in a consistory Oct. 5. Among them are 10 who are eligible to vote in a future conclave.

Coming from North America, Central America, Africa, Europe, and Asia, Pope Francis said Sept. 1 that "their origin expresses the missionary vocation of the Church, which continues to proclaim the merciful love of God to all people on earth." 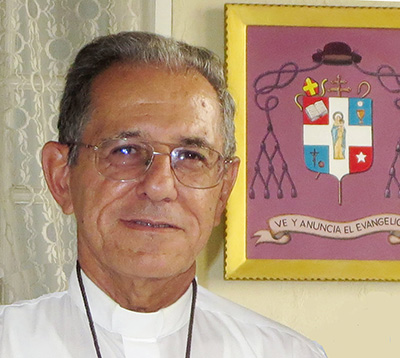 Among those to be elevated to cardinal is Canadian Jesuit Father Michael Czerny, the head of the Migrants and Refugees section of the Dicastery for Promoting Integral Human Development.

From Africa are Archbishop Fridolin Ambongo Besungu of Kinshasa in the Democratic Republic of Congo and Archbishop Cristobal Lopez Romero of Rabat in Morocco.

There is Archbishop Ignatius Suharyo Hardjoatmodjo of Jakarta in Indonesia and Bishop Alvaro Ramazzini of Huehuetenango, Guatemala.

Pope Francis will also elevate three bishops over the age of 80, and therefore ineligible to vote in a conclave, but who, he said, "have distinguished themselves for their service to the Church."

They are: Archbishop Michael Louis Fitzgerald, emeritus of Nepte in Tunisia and a former president of the Pontifical Council for Interreligious Dialogue; Archbishop Sigitas Tamkevicius, emeritus of Kaunas in Lithuania, who was arrested and persecuted under the Soviet regime; and Bishop Eugenio Dal Corso, emeritus of Benguela in Angola, where he was a missionary.

As it stands now, the College of Cardinals has 215 members, 118 of whom are electors.

Pope Francis announced his intention to add to the College of Cardinals from a window overlooking St. Peter's Square, after leading the Angelus Sept. 1.