Speakers at St. Thomas U. conference call it a reality that directly affects the most vulnerable 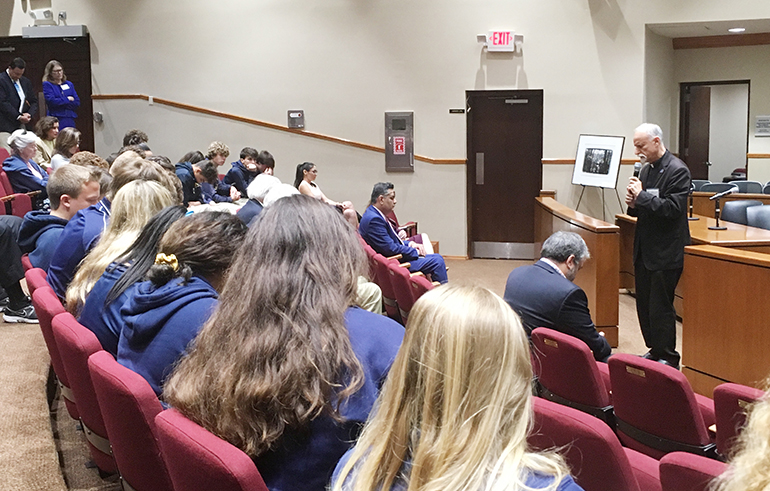 Father Alfred Cioffi leads participants in prayer at the conclusion of St. Thomas University's Second International Conference on Climate. His prayer: "We can, we should" do something about climate change, global warming and other environmental issues. 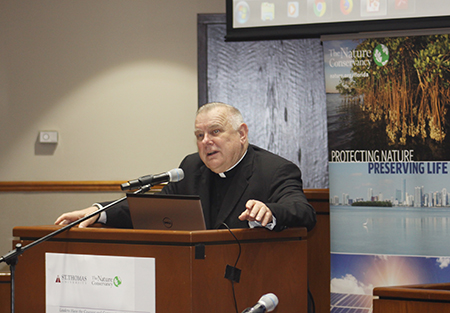 MIAMI GARDENS | Climate change is real, there’s plenty of scientific evidence to prove it, and the various faith communities should come together to do something about it.

That was the message repeated by speakers at the Second International Conference on Climate, which took place April 4 and 5 at St. Thomas University in Miami Gardens. The focus of this year’s conference was caring for creation in different faith traditions. The event brought representatives from Protestant churches, the Muslim community, Archbishop Thomas Wenski, and several scientists and experts to speak on the subject.

Rabbi Jeffrey K. Salkin, of Temple Solel in Hollywood, called climate change “the 11th plague.” But the good news is that “we can make changes to our habits and we can urge our churches, synagogues and institutions to get involved on the subject. This is something that will unite different communities of faith.”

The representative of the Muslim community, Nadia Ahmad, a law professor at Barry University, agreed, noting that “caring for creation is a theme that all faiths recognize.”

In his opening remarks, Luis Fernandez, dean of undergraduate programs at St. Thomas, stressed that “climate change is real. There is sufficient scientific evidence to prove it.”

He noted that extreme climatic events, from droughts to flooding, are becoming much more common. Glaciers are melting, sea levels are rising, and the phenomenon is affecting every part of the world. Many species are moving toward extinction at a faster rate, and more people are at risk of disease and famine than at any time since World War II. 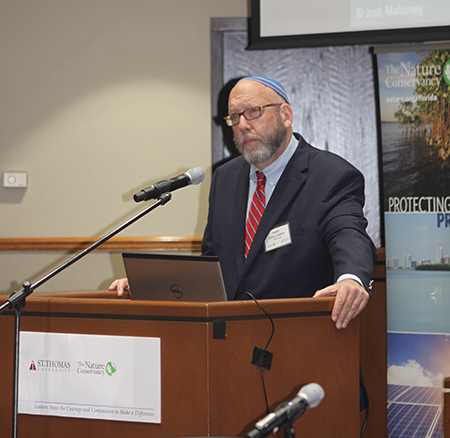 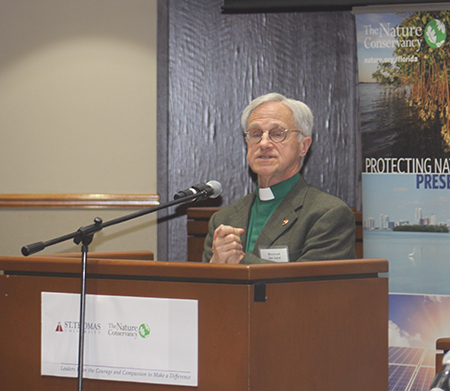 “Climate change is no longer an event of the future, it is happening right now,” Rev. Dr. Jim Antal, of the Massachusetts Conference United Church of Christ, tells participants at the Second International Conference on Climate. He is a climate change activist and author of “Climate Church, Climate World.” 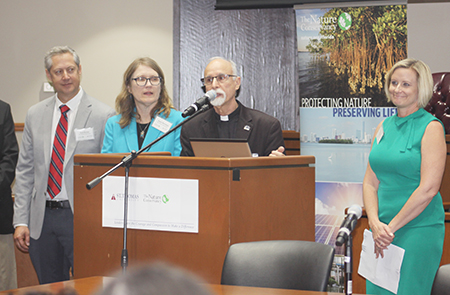 Father Alfred Cioffi, professor of biology and bioethics at St. Thomas University, welcomes participants to the Second International Conference on Climate, joined by members of The Nature Conservancy, who teamed up with St. Thomas to organize the conference, held April 4 and 5. Father Cioffi is at center, with, from left, The Nature Conservancy members Rod Braun, Janet Bowman and Temperince Morgan.

“Climate change does not have political affiliations, nor does it take the economy nor faith into account. It affects everything. Because of this, immediate action is required,” Fernandez said.

Temperince Morgan, executive director of The Nature Conservancy, which teamed up with St. Thomas to co-host the event, said South Florida is already living with the reality of climate change. Rising sea temperatures are endangering coral reefs that act as natural barriers against hurricanes and storms. One of the missions of the organization is to restore the natural habitat of those reefs by 2030.

“Climate change is no longer an event of the future, it is happening right now,” said Rev. Dr. Jim Antal, of the Massachusetts Conference United Church of Christ, a climate change activist and author of “Climate Church, Climate World.” He pointed out that oceans absorb 93 percent of the heat created by global warming and the warming is occurring 40 percent faster than expected.

Laudato Si explains that “human life is based on three fundamental and closely related relationships: with God, with our neighbor and with the Earth itself,” the archbishop said.

In humanity’s relationship with the Earth, “Pope Francis focuses on the impacts of pollution, the need for drinkable water, the disposal of toxic waste and climate change, the last of which he calls ‘one of the main challenges facing humanity in our day,’” Archbishop Wenski added.

Although access to drinkable water is a basic human and universal right, currently “the poor do not have access to drinkable water. They are denied the right to a life compatible with their inalienable dignity,” said the Vatican’s representative to the conference, Tebaldo Vinciguerra, who works in the Dicastery for the Promotion of Integral Human Development.

Dr. Benjamin Kirtman, professor of atmospheric sciences at the University of Miami, said “the science on climate change points out that it is extremely probable (95-100 percent) that the human influence has been the dominant cause for heating since the mid-20th century. Multiple lines of evidence exist.”

Global warming is causing glaciers to melt, which in turn causes a rise in sea level. Excess rains also are caused by global warming. If no measures are taken to remedy the situation, scientists predict that the flooding that now occurs every five years in Miami Beach will occur every few months by the year 2030, with massive flooding happening every day by 2070.

Politicians were represented at the conference by the mayor of the city of Miami Gardens and Florida Senator Jose Javier Rodriguez, who arrived wearing rain boots. He expressed frustration that few of his colleagues in the state legislature consider it a priority to protect against and plan for climate change.

“South Florida is probably the most vulnerable place on the planet due to its geologic position and sea level rise,” he said, stressing that Florida’s leadership needs a transformation because this is a critical moment. 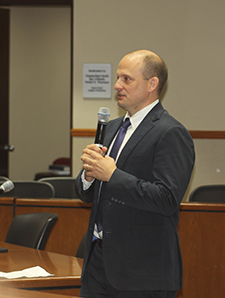 Florida Senator Jose Javier Rodriguez attended the climate conference at St. Thomas University wearing galoshes to emphasize the need for his colleagues in the legislature to protect against and plan for climate change. 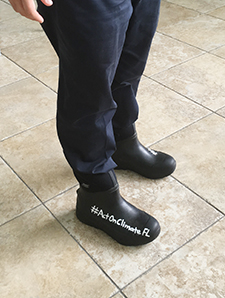 Florida Senator Jose Javier Rodriguez attended the climate conference at St. Thomas University wearing galoshes to emphasize the need for his colleagues in the legislature to protect against and plan for climate change.

“This encyclical falls totally within the social doctrine of the Church, which focuses on the most needy among us,” said Father Alfred Cioffi, professor of biology and bioethics at St. Thomas and organizer of both conferences.

He explained that climate changes of any kind generally have a more negative impact on the poor because they do not have the economic resources needed to adapt.

“Climate change multiplies and accelerates injustice,” Rev. Antal agreed, not only because it affects the poor but because the people and institutions that cause it pay no compensation for the catastrophic damages they create.

Turner presented a study completed in 2015 describing the risk of cancer in the Miami and Fort Lauderdale areas, which found that the Hispanic population had the highest level of exposure to pollution when compared to white non-Hispanics.

“We need to discuss climate change in the Church, in places of worship. Why don’t we discuss God’s creation every Sunday? The more we speak about it the more we will have the courage to do something about it,” said Rev. Antal.

Longer-term solutions are being sought, Father Cioffi said. These include persuading people to change their lifestyles by creating awareness of the need to use less water, less gasoline, and, if possible, switch to electric or hybrid cars; as well as having conversations with people who are skeptical or do not understand or want to accept that the climate is changing little by little, that the atmosphere is getting warmer, that this is real and true and it is up to us to do something about it.

To view footage from the first and second conference on climate visit: https://forms.stu.edu/Programs/Science/Climate-Conference.