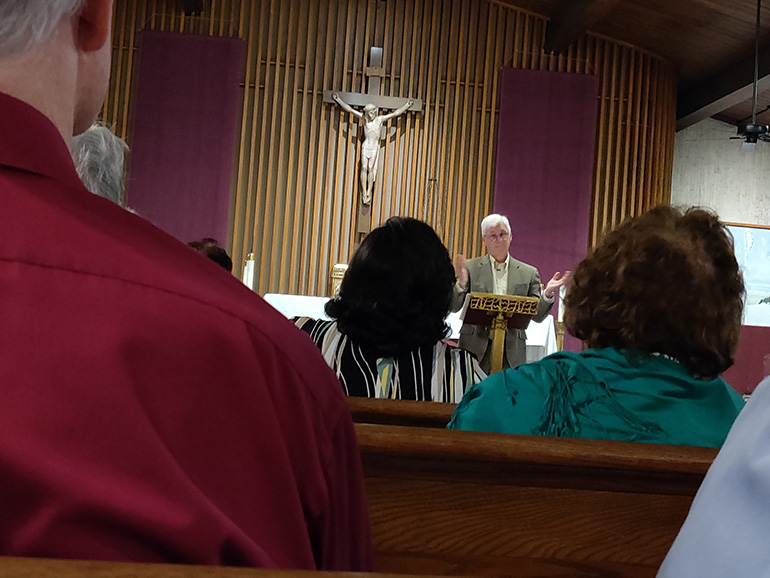 CORAL GABLES | When Catholic author and speaker Ralph Martin planned a visit to South Florida with his wife, he called a former pupil for a dinner meetup. Instead, Father Richard Vigoa, administrator at St. Augustine Church and Catholic Student Center, invited him to speak about “The New Evangelization: What Is It? Why Bother?”

Though Martin is well-versed in systematic theology — he is a professor at Sacred Heart Seminary in Detroit — he delivered his talk at St. Augustine March 21 in a way that those without a degree could understand. The content came from the Catechism of the Catholic Church, but he broke it down in practical ways.

Martin quoted Pope St. John Paul II’s definition of the new evangelization in Redemptoris Missio, then went on to explain that it’s all about conversion. “Sometimes people come to church regularly or are active in their parish but are not converted. They haven’t reached the heart of things,” he said.

Conversion, he added, is a complete and sincere adherence to Christ and his Gospel through faith. He cautioned against the idolatry of creating a god after our own image, picking and choosing what we want Jesus to say or think. But Jesus can’t be separated from his Gospel and teachings.

Martin briefly described a society awash in Catholic morality and culture. Faith was once received by osmosis and practiced in daily life. Entire towns or communities were practicing Catholics.

But Catholic culture has weakened significantly in modern times. Now, natural communities are breaking down, and an electronic culture of distraction has taken over. The need to re-encounter Christ has been emphasized by 20th- and 21st-century popes because they recognized the laity’s need for a relationship with Christ in an increasingly pagan culture.

Where evangelization was once directed toward far off nations through missionary religious orders, the new evangelization is directed at the baptized. The mission field is now our own communities and parishes.

He pointed out the reality that many baptized Catholics have drifted away from the Church or are living a lifestyle not in accord with the Gospel.

The new evangelization is also a mission given to lay people as well as priests and religious. It aims to awaken the baptized to who they are, who they were created to be and what their mission is. The goal is to equip parishioners to become leaders in their communities and reach out to their peers.

“Lay people don’t have to wait for their pastor or bishop to give them a mission,” Martin said. “God has already given the laity a mission through their baptism.”

He illustrated the urgency of the salvation of souls by quoting Biblical verses, excerpts from St. Faustina’s diary, and the message of Fatima. After sharing stories of how fasting and prayer led to the conversion of his own family member, he left the audience with this question: “There may be someone in your life that no one else will ever pray for except you. What’s a soul worth? What are you willing to do to have them experience God’s love? What are you willing to do for the salvation of souls?”

During his talk at St. Augustine Church March 21, Ralph Martin gave practical tips for putting the new evangelization into practice: