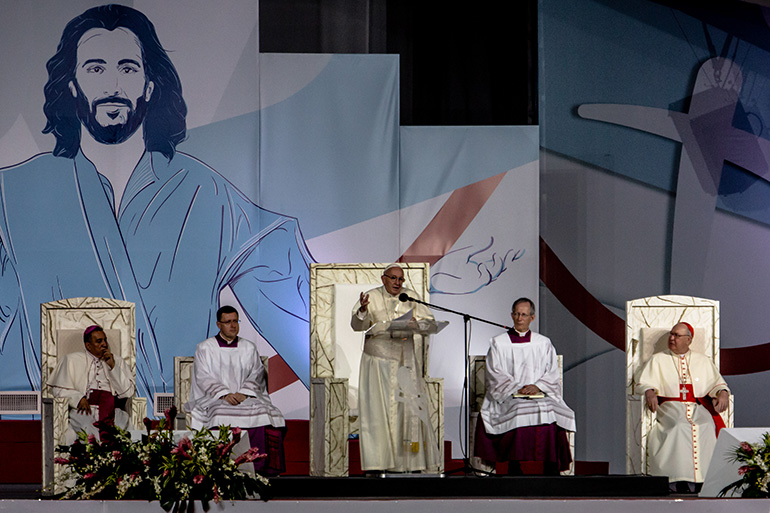 VATICAN CITY | In his follow-up document to October’s youth synod, Pope Francis urged young people to approach holiness not only with the joy and boldness of youth, but with seriousness.

Addressing adolescents and young adults, he said: “I hope that you will be serious enough about yourself to make an effort to grow spiritually.”

“Along with all the other exciting things about youth, there is also the beauty of seeking ‘righteousness, faith, love and peace’ (2 Tim. 2:22). This does not involve losing anything of your spontaneity, boldness, enthusiasm and tenderness,” he said.

Published April 2, Christus Vivit (Christ lives) is Pope Francis’ apostolic exhortation on the Synod of Bishops on young people, faith, and vocational discernment, which took place Oct. 3-28, 2018. It was signed March 25, the Solemnity of the Annunciation, in the Holy House of Mary in Loreto, Italy.

Francis explained that “becoming an adult does not mean you have to abandon what is best about this stage of your lives.” 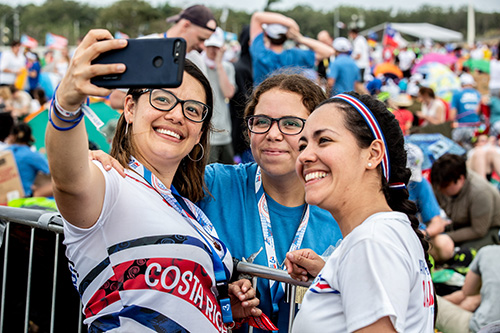 “Growing older means preserving and cherishing the most precious things about our youth, but it also involves having to purify those things that are not good and receiving new gifts from God so we can develop the things that really matter.”

The 50-page letter is addressed to “all Christian young people” in particular and to the “entire People of God.” Francis stated that while the document was inspired by what emerged from synod discussions it is not exhaustive, but a summary of the proposals he considers most important.

This letter, he said, “is meant to remind you of certain convictions born of our faith, and at the same time to encourage you to grow in holiness and in commitment to your personal vocation.”

According to Pope Francis, the idea of “youth” should not be analyzed in the abstract, but always considered as concrete “young people,” each “with the reality of his or her own life.”

In his letter he focused on the obstacles faced by young people today, such as isolation, over-consumption of media, and addiction to drugs and pornography. Do not let the world “rob you of hope and joy, or drug you into becoming a slave to their interests,” the pope said.

“You need to realize one basic truth: being young is not only about pursuing fleeting pleasures and superficial achievements. If the years of your youth are to serve their purpose in life, they must be a time of generous commitment, whole-hearted dedication, and sacrifices that are difficult but ultimately fruitful.”

He warned against isolation and lack of community, which modern technology can contribute to, saying, “when we live apart from others, it is very difficult to fight against concupiscence, the snares and temptations of the devil, and the selfishness of the world. Bombarded as we are by so many enticements, we can grow too isolated, lose our sense of reality and inner clarity, and easily succumb.”

But whenever young people are united, they have a “marvelous strength,” he continued. “Whenever you are enthused about life in common, you are capable of great sacrifices for others and for the community. Isolation, on the other hand, saps our strength and exposes us to the worst evils of our time.”

Pope Francis also reflected on the contribution young people can make to the renewal of the Catholic Church through evangelization and community.

“Young people can offer the Church the beauty of youth by renewing her ability to ‘rejoice with new beginnings, to give unreservedly of herself, to be renewed and to set out for ever greater accomplishments,’” he said, quoting from the Second Vatican Council’s Message to Young People.

He said “If you are young in years, but feel weak, weary or disillusioned, ask Jesus to renew you. With him, hope never fails.” He encouraged silent prayer, discernment, and listening to God.

Even “if you feel overwhelmed by vices, bad habits, selfishness or unhealthy pastimes,” he said, “Jesus, brimming with life, wants to help you make your youth worthwhile. In this way, you will not deprive the world of the contribution that you alone can make, in all your uniqueness and originality.”

CALLED TO SOMETHING GREATER

“You can become what God your Creator knows you are, if only you realize that you are called to something greater. Ask the help of the Holy Spirit and confidently aim for the great goal of holiness,” he said. “In this way, you will not be a photocopy. You will be fully yourself.”

Speaking about vocation, the pope said that, while a gift, it will “undoubtedly also be demanding.”

“In the end, [vocation] is a recognition of why I was made, why I am here on earth, and what the Lord’s plan is for my life,” he stated. Though God will not show a person every detail of his vocation, and one must prudently make one’s own decisions, “like clay in the hands of a potter, I can let myself be shaped and guided by him.”

If called to marriage, for example, having a family “is worth your every effort,” he said.

“Dear young people, my joyful hope is to see you keep running the race before you,” the pope concluded. “May the Holy Spirit urge you on as you run this race. The Church needs your momentum, your intuitions, your faith. We need them!”