At first vows of four Servants of the Pierced Hearts

Archbishop Thomas Wenski preached this homily at the profession of first vows by four Servants of the Pierced Hearts of Jesus and Mary. The Mass and profession took place Jan. 6, 2018, at Our Lady of Lourdes Parish in Miami.

A while ago, I reviewed a vocation video, and, in the video, one sister who was sharing her vocation story told the story about how one day when she was walking in some downtown area, a little girl saw her, pointed to her and said to her mother: Mommy, look there goes the Churchâ¦ She said this, because of her habit â and not because of her size.

But the little girl grasped a profound truth about the nature of consecrated life. You “consecrated” are the Church “concentrated” â as it were. Your lives as consecrated religious is at the very heart of the Church â because your radical embrace of the Gospel makes manifest the inner nature of every Christian’s calling. Or, in the words of the Second Vatican Council, “the ultimate norm of religious life is the following of Christ” (vitae religiosae ultima norma sequela Christi).

Pope Benedict once remarked: “Today, as in all ages, there is no lack of generous souls ready to give up everyone and everything to embrace Christ and His Gospel, consecrating their existence to His service with communities characterized by enthusiasm, generosity and joy.” At this Mass, four of those generous souls will profess their vows as sisters, as Servants of the Pierced Hearts of Jesus and Mary.

You vow to live the evangelical counsels: poverty, chastity and obedience and, in this particular institute, a fourth vow of total Marian availability through which each sister places her feminine genius and potentialities at the service of the Apostolic-Petrine Principle, which the world â and too often the faithful â see as simply renunciations. However, they are more than that â for each counsel in its own unique way is a specific acceptance of the Mystery of Christ lived out within the Church. As I said, you are the Church concentrated. And through you and your witness, the evangelical counsels â “characteristic features of Jesus, the chaste, poor, obedient one” â are made constantly visible in the midst of the world.

As the Church “concentrated,” you give us a unique witness to the implication of our own baptismal call to holiness. Your consecrated life is a gift to the Church that makes manifest the striving of the whole Church as Bride towards union with her one Spouse.

Vatican II rightly emphasized all the baptized are called to holiness. Thus, all are equally called to follow Christ, to discover in him the ultimate meaning of our existence.

However, those whose baptismal consecration has developed into a radical response to the following of Christ expressed in vows of poverty, chastity and obedience have a “special experience of the light that shines forth from the Incarnate Word.”

In Pope Saint John Paul II’s Vita Consecrata, an apostolic exhortation delivered after the Synod on Consecrated Life in 1995, he describes religious life as an “Icon of the Transfigured Christ” â for the vowed life does proclaim and anticipate the future age when we will experience the fullness of the Kingdom. When Peter witnessed the transfiguration, he exclaimed, “It is good for us to be here.” And, I can say in the name of all the people in this church this morning, how good it is for us that you chose to be with the Lord, to devote yourselves to the Lord, to make him the one focus of your lives.

In the world, we see people who are concerned with their own autonomy, people jealous of their freedom, people fearful of losing their independence. In such a world, as religious sisters, you are â and you must be â signs of contradiction. Your existence â in the world but not of the world â points to the possibility of a different way of fulfillment of one’s life, “a way where God is the goal, his Word the light, and his will the guide, where consecrated persons move along peacefully in the certainty of being sustained by the hands of a Father who welcomes and provides, where they are accompanied by brothers and sisters, moved by the same Spirit, who wants to and knows how to satisfy the desires and longings sown by the Father in the heart of each one.”

On behalf of all of us here, but also as the Archbishop of Miami, I thank our soon-to-be newly professed sisters for their enthusiasm, for their generosity, and for their joy. We bring all of this to the Lord â and to his table of sacrifice. May the Eucharist â during which we are privileged to gaze upon the face of the Lord â affirm you and strengthen you in your resolve to give up everybody and everything to embrace Christ and His Gospel. 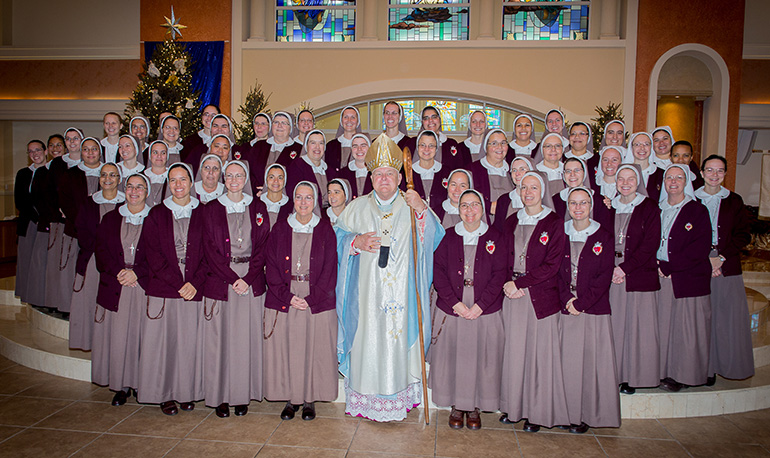 The entire community of Servants of the Pierced Hearts, including the newly professed sisters, pose with Archbishop Thomas Wenski after the ceremony. The newly professed were: Sister Clare Marie of the Immaculate Lamb, Sister Mary Rachel of the Pierced and Eucharistic Heart of Jesus, Sister Brittany Rose of the Spousal and Maternal Love of Mary, Sister Alexia Maria of the Face of the Redeemer.