An interview with the seminary rector

Major seminary of St. Vincent de Paul has doubled its enrollment in past decade 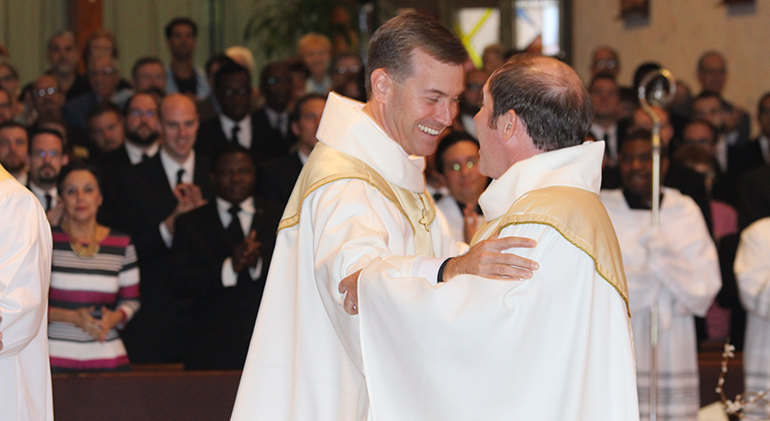 Msgr. David Toups, rector of St. Vincent de Paul Regional Seminary in Boynton Beach, congratulates Father Martin Dunne III moments after he becomes a new priest of the Diocese of Palm Beach. Father Dunne spent years in study, formation and discernment at the seminary in preparation for the priesthood.

BOYNTON BEACH | St. Vincent de Paul Regional Seminary in Boynton Beach is enjoying a boom in student enrollment â 117 incoming seminarians, up from 110 last year, and more than double the 58 who entered 10 years ago.

The seminary celebrated its 50th anniversary in 2013, but didn’t rest on its laurels: That year, it began a two-year project to renovate its old dormitories and build two new ones. The expansion was needed for a seminary that serves not only all seven dioceses of Florida, but two in Georgia: Atlanta and Savannah.

Msgr. David Toups, rector, paused in preparing for the academic year to talk about the new class, why they come, how many stay, challenges of the seminary and other matters. Here’s what he told us.

Q: What kinds of men are the incoming students?

A: They’re typically in their late 20s, and they’ve been involved in Church for some time, in things like youth and campus ministries. Now they’ve felt the call to service as priests. They’re connected with the Church.

Q: Are they different than in past years?

A: The age is decreasing. A decade ago, they were in their mid-30s. You could say a third came directly out of high school into the college seminary in Miami (St. John Vianney). A third came through secular university, where they were involved in campus ministry. And a third had been doing some form of work in the world.

Q: What are their motivations for entering seminary?

A: A desire to make a difference in the world and in the Church. They no longer come because the priesthood is considered a source of esteem. It’s more a motivation of servanthood to the people of God. And Pope Francis has helped remind us of that in a strong way, by talking about becoming servants, missionary disciples, urging us to go to the peripheries and find the lost sheep. Everything the men do here is for that.

Q: Have teaching methods changed over the years?

A: They’re of the millennial generation, so we use PowerPoint, social media and online platforms as any university does. They can do reading material and hand in assignments online. 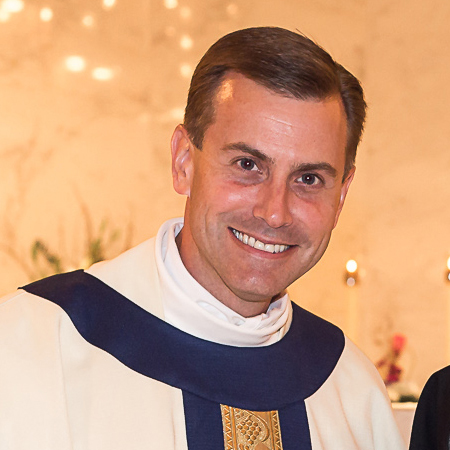 We form the men in four distinct ways: human, spiritual, pastoral and intellectual. We give them a master’s degree in divinity as part of their four or five years here. But they get a much more integrated life of formation and study. We’re interested in the whole person. We want them to be the best human instrument to convey the Gospel.

Q: Have seminarians changed over the years? Is each graduating class different?

A: Every graduating class has its own personality. Here, our men look to our 54-year history and the growth of the Church in Florida. And they realize they’re building on their predecessors, the Irish missionaries who built the Church here. For that matter, they’re also building on the two millennia of apostles who preceded us. They learn the great tradition of what it means to be a Catholic. They want very much to be agents of change for the good. They’ve certainly seen the dark side, and they said that’s not who we are, it’s not how the Church is. They want to be forces for good.

Q: What’s the dropout rate? What are the biggest reasons for dropping out?

A: We have a 10 percent attrition rate every year, whether from the man’s decision or ours. There are a number of reasons. They may sense a call to marriage. There may be a recognition that after a pastoral year, this lifestyle is not for them. They may not like always being on call, or being a public person.

It could also be our recognition that the man doesn’t have the moral fiber or the personality to take on the person of Christ in the priesthood. It’s a rigorous time of formation. We want only the best for the people of God.

Q: What challenges do you face as seminary rector?

A: I consider myself the most blessed rector in the U.S.A. I have the complete support of the bishops of Florida, who provide the faculty and finance and the fine students they send us. Those are the challenges of a seminary rector: faculty, finance, students. This is a unique period of our history where we can say it’s all good.

Q: Nationally, enrollment is up, but the number of priests is down. How come? When is it expected to bottom out and turn around?

A: I think you’re looking at the unrealistic spike after World War II.  After the early 1970s, there was a lot of exodus. The men were disillusioned with what they thought would be the changes after Vatican II. Pre-World War II, we’re not too far off that. Not that we’re out of the woods in terms of needing to recruit.

Q: Is the secularization of the country affecting seminaries like St. Vincent de Paul?

A: I’d say it makes us all the more countercultural. Many of the young have not rejected the faith â in many ways, they’ve never been exposed to it. We know the message of Jesus Christ does fill the longing of the human heart. But to those who have discovered the emptiness of that world, the priesthood can fill their hearts. Young people desire challenge, identity, mission.

Q: Could the Church be encouraging vocations in some way that it’s not already doing?

A: The bishop and the vocations director have to be out there encouraging every priest to be a vocation director. Every priest should be looking for his replacement. That’s very much in line with Christ’s own public ministry in saying, “Come, follow me.”

Every priest should see this Christ-like way of calling people, and with the bishop’s and vocations director’s encouragement. And I think that’s being done better, as evidenced by our increasing enrollment at St. Vincent de Paul.

Q: Are you optimistic for vocations? If so, on what basis?

A: I’m optimistic, based on the doubling of the seminary over the last dozen years. I’m a priest in the Diocese of St. Petersburg and I’ve seen men who were ordained there, and it gives me great hope.

I’m also encouraged by the generosity of the bishops and donors, who have helped us build the campus in the last five years to grow and to be sustainable in terms of buildings, infrastructure and an endowment. This institution is here for the long term. I think that’s good for the people of Florida to know.

And as seminary rector and a professor, in and of itself that’s a very encouraging world to live in. I’m surrounded by young people with hope and zeal, and a desire to make a difference. That’s why our own seminary magazine is called Seeds of Hope. Our job is simply to plant seeds. God will always provide. Maybe not in the way we expect, but he’ll always provide.

Msgr. David Toups - 09/21/2017 04:29 PM
Dear Joseph, Thank you for your question. We are a very unique institution as a bilingual and multicultural seminary. We certainly represent the diverse face of the Church in the United States: White Non-Hispanic: 37% Hispanic:40% Asian: 6% African: 6% African-American: 3% Haitian: 3% Other: 5% Thank you for your prayers for our seminary community and we ask the Lord to continue to call many holy laborers in to His vineyard! Sincerely yours in Christ, Msgr. David Toups